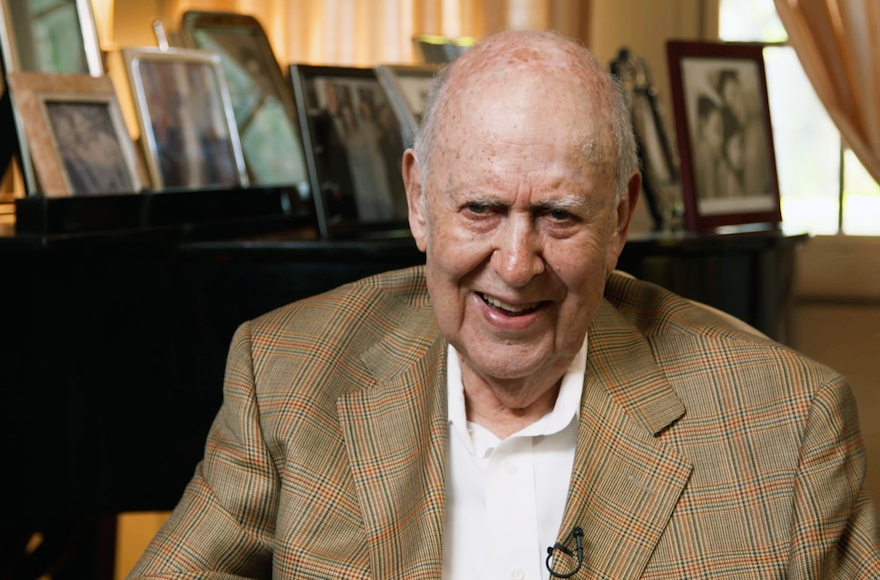 (JTA) — The first thing Carl Reiner does every morning is pick up the paper and read the obituary section to check if he’s named there.

“If I’m not, I’ll have my breakfast”— or so he says in the charming and appropriately titled HBO documentary “If You’re Not in the Obit, Eat Breakfast.”

Then the 95-year-old actor, writer and director, the creator of the “Dick Van Dyke Show” — “my greatest achievement,” he tells JTA — goes to his computer to work on his latest project, a book. In fact, that’s what he was doing when a reporter calls to talk about the film and their shared genesis in the Bronx (and not necessarily in that order).

Reiner, however, is not entirely in a reflective mood and dismisses the invitation to reminisce.

“You know,” he says, “I wrote three books about growing up in the Bronx.”

Instead, he quickly brings the conversation into the present.

“It’s funny you mention the [Loew’s] Paradise [Theater on the Grand Concourse]. While we’re talking I’m working with a graphic designer,” he says. “We’re putting together a book of posters of movies that influenced me as I was growing up. Movies and TV moved me more than anything. Eddie Cantor. Jack Benny. Fibber McGee and Molly.”

The book — tentatively titled “Carl Reiner Alive at 95 Recalling Movies He Loved” — is one of several recently published or in the works in his crowded pipeline. These include a newly released children’s book, “You Say God Bless You for Sneezing and Farting,” and the forthcoming memoir “Too Busy to Die.”

Staying busy is one of the bromides offered in the the heartwarming HBO film Reiner hosts. The idea for “If You’re Not in the Obit” percolated from an obituary Reiner read for actress Polly Bergen, who died in 2014 at age 84.

“It scared the bejeebers out of me,” he says in the film.

The obit, Reiner goes on, stayed with him.

“How come we got the extra years and we’re thriving?” he wondered. 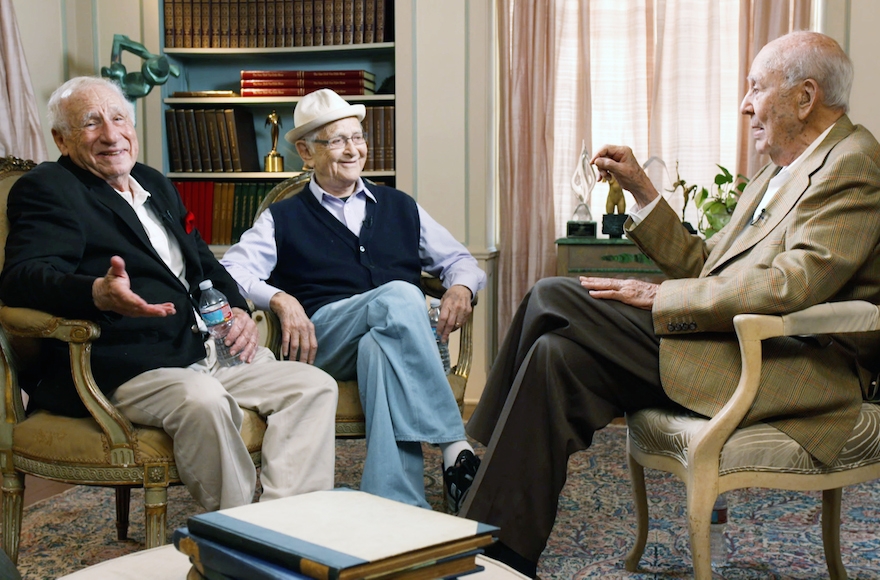 Mel Brooks, left, and Norman Lear, center, with Carl Reiner in “If You’re Not in the Obit, Eat Breakfast.” (Courtesy of HBO)

So at the suggestion of his nephew, the producer George Shapiro, Reiner set out to find what keeps some old people young. For example, he visits 102-year-old Ida Keeling, who does push-ups and jogs daily. She started running at 67 to overcome depression resulting from the drug-related murders of her two sons.

Among others appearing in this delightful film are Patricia Morrison, 101, who starred in the original productions of “Kiss Me Kate” and “The King and I”; comic actress Betty White, 94, and fashion icon Iris Apfel, 94.

“People ask me where I get my vitality,” Apfel says, “and to tell you the truth, I don’t have a clue.”

A funny bone is one thing that almost all the people interviewed had in common. For example, the late Fyvush Finkel — who was 92 when he was interviewed in 2015 — says, “There’s nothing more boring than a clean old man.”

Kirk Douglas, 100, speaks about how his wife urged him to go on the road with a one-man show to show how he was recovering from a stroke.

“What does an actor who can’t talk wait for? Silent pictures to come back?” he asks.

They also shared a zest for life, a joie de vivre. Among those interviewed were 93-year-old Harriette Thompson, the oldest woman ever to finish a marathon, and Jim “Pee-Wee” Martin, who fought in D-Day and still parachutes today.

The film doesn’t provide a definitive answer to living a long life.

“I think it’s partly your genes,” Reiner says. “Also, it’s your environment. Also, if you have a funny bone; if you grew up in a family with a sense of humor.”

For Reiner, at least, religion or spirituality hasn’t played much of a role in his longevity. He didn’t attend Hebrew school growing up.

“I got a bootleg bar mitzvah,” he says. “An old Jew taught me just enough to sneak by.”

Reiner’s spirituality hasn’t increased much with age — his belief in a higher power was a casualty of World War II.

“Six million people died in the Holocaust and 6 million others yelling to God, ‘Please stop this f***er,’ and He didn’t.”

Reiner does, however, point to family and friendships as an important aspect of achieving old age, noting in the film, “The key to longevity is to interact with other people.”

His support system includes multiple Emmy Award winner Norman Lear and longtime buddy Mel Brooks. If not reflective about the Bronx, Reiner is more than willing to talk about his 67-year friendship with Brooks.

“Mel and I go back to 1950, the first day I came to the ‘Show of Shows,'” he says, recalling the 90-minute variety show featuring Sid Caesar and Imogene Coca. “I was hired as an actor, to be a straight man for Sid. Mel was in the office. He wasn’t on the [show’s] writing staff yet. He was working for Sid, giving him jokes.

“I came in and didn’t know who he was. But Mel was standing there doing a Jewish pirate, saying, ‘You don’t know how hard it is to set sail. It’s $3.87 for a yard of sail cloth. I can’t afford to pillage and plunder anymore.’

“So I just started interviewing him, and I just interviewed him for the next 10 years.”

The pirate warped into the 2000 Year Old Man — a routine they performed at parties and made a private recording “for our non-anti-Semitic friends,” Reiner quips. “Cary Grant loved it and asked if he could have a dozen records. He was going to England and wanted it for his trip. You know they speak English there.

“When he got back he said, ‘she loved it.’ We asked, ‘Who?’ and he said, ‘the Queen Mother,'” he says. “What an endorsement. The biggest shiksa in the world loved it.”

Reiner and Brooks became inseparable buddies; an intense friendship that continues to this day. Reiner says that what helped cement their relationship was that their wives, Estelle Reiner and Anne Bancroft, got along. Bancroft, an Academy Award-winning actress, died in 2005, and Estelle Reiner passed away in 2008.

“It was easy; it was a foursome,” Reiner says. “Mel still comes over almost every night. We watched ‘Captain Blood’ yesterday.”

Who decides what to watch? “We talk it over,” he explains. “We’ll see anything on that’s worth a look. We also watch journalism — Rachel Maddow, who knows that Trump is a schmuck.” (That’s an opinion Reiner frequently shares about the president with his 169,000 followers on Twitter.)

What else can Donald J.Trump possibly do to prove that he is the wrongest person for the job he should not have been elected to do?

After tweeting this uniformative tweet am going to bed and watch a re-run of Columbo.

In addition to his collaborations with Brooks, Reiner has enjoyed a long and enviable career — of which he sees creating, writing and appearing in the legendary “Dick Van Dyke Show” as a pinnacle. Reiner calls Van Dyke, 91, “the most agile human being I’ve ever seen in my life” — a talent that he demonstrates in the film, dancing and singing with his wife, Arlene.

Van Dyke, as it happens, also authored a book on aging, its title encapsulating his philosophy: “Keep Moving.”

Then again, three years before Van Dyke’s book was published, in 2015 he married Arlene, a makeup artist.  She happens to be half his age — perhaps  another key to a long life.