Speaking to Muslim and Arab leaders, Trump calls to drive out terrorists and extremists 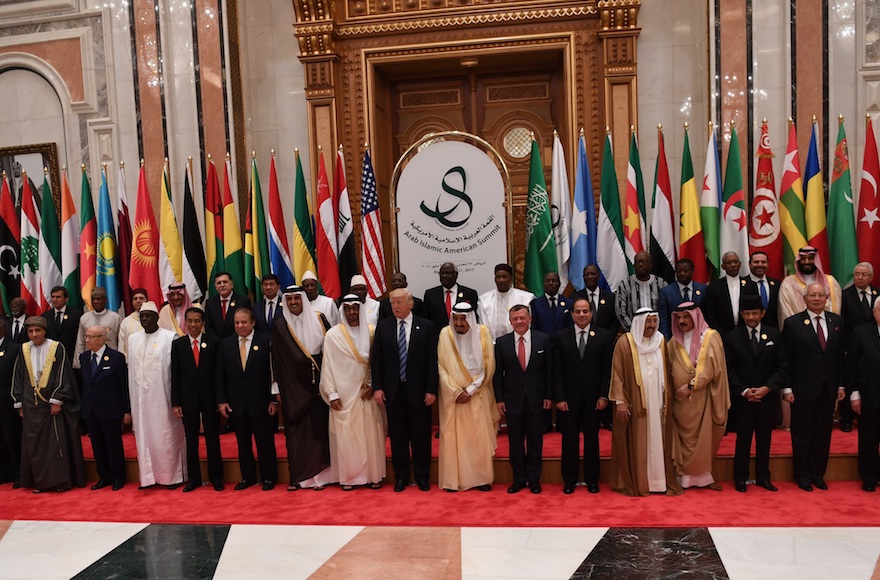 (JTA) — President Donald Trump called on Arab and Muslim leaders gathered in Saudi Arabia to drive out terrorists and extremists.

“Our friends will never question our support, and our enemies will never doubt our determination. Our partnerships will advance security through stability, not through radical disruption. We will make decisions based on real-world outcomes – not inflexible ideology. We will be guided by the lessons of experience, not the confines of rigid thinking. And, wherever possible, we will seek gradual reforms – not sudden intervention.”

Trump barely referenced Jews or Israel in his speech directed to the Arab world, but he called for tolerance and respect for all peoples.

“For many centuries the Middle East has been home to Christians, Muslims and Jews living side-by-side. We must practice tolerance and respect for each other once again—and make this region a place where every man and woman, no matter their faith or ethnicity, can enjoy a life of dignity and hope,” he said.

Trump mentioned that he would be continuing on to “Jerusalem and Bethlehem, and then to the Vatican.”

“If these three faiths can join together in cooperation, then peace in this world is possible – including peace between Israelis and Palestinians. I will be meeting with both Israeli Prime Minister Benjamin Netanyahu and Palestinian President Mahmoud Abbas,” he said.

Trump also took Iran to task for destabilizing the region and called on the international community to isolate the Islamic Republic.

“Responsible nations must work together to end the humanitarian crisis in Syria, eradicate ISIS, and restore stability to the region. The Iranian regime’s longest-suffering victims are its own people. Iran has a rich history and culture, but the people of Iran have endured hardship and despair under their leaders’ reckless pursuit of conflict and terror,” he said.

“Until the Iranian regime is willing to be a partner for peace, all nations of conscience must work together to isolate Iran, deny it funding for terrorism, and pray for the day when the Iranian people have the just and righteous government they deserve.”

Trump and his entourage, including daughter Ivanka and son-in-law Jared Kushner, arrived in Saudi Arabia on Saturday. On Monday he will leave Saudi Arabia and head for Israel, part of his first international trip as president.