Netanyahu, a man in the middle, scrambles to give Trump a warm welcome 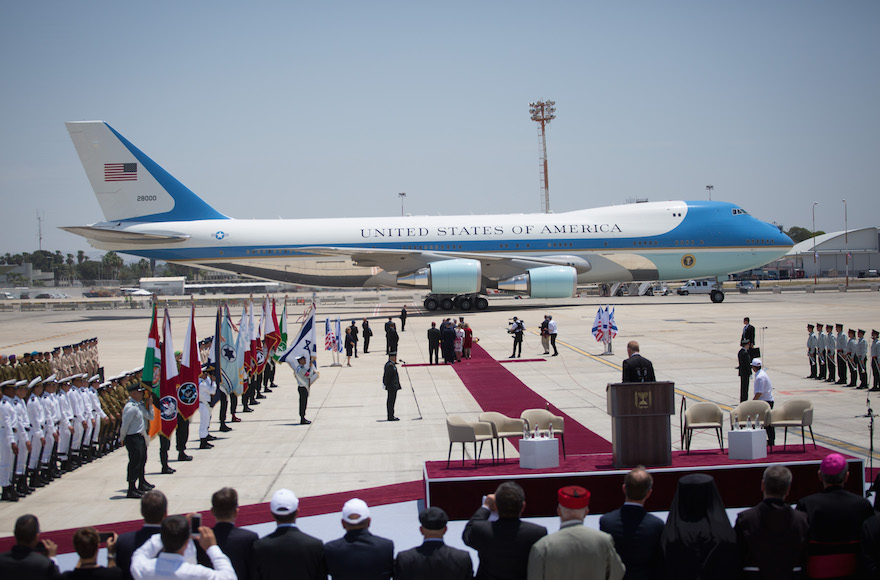 TEL AVIV (JTA) — Prime Minister Benjamin Netanyahu did his best to give Donald Trump a warm welcome when he landed Monday at Ben Gurion Airport on his first trip abroad as U.S. president.

Netanyahu has pushed his government to accommodate Trump both on his visit and in his aspiration to make a deal between Israel and the Palestinians, but many Israeli ministers have signaled they are not willing to yield much more political ground.

That tension was reflected in Netanyahu welcoming remarks on the tarmac, which evinced openness to peace, with major caveats.

“Israel’s hand is extended in peace to all our neighbors, including the Palestinians,” the Israeli leader said. “The peace we seek is a genuine one, in which the Jewish state is recognized, security remains in Israel’s hands, and the conflict ends once and for all.”

Just getting all the ministers to show up at the airport for the welcoming ceremony reportedly took cajoling by Netanyahu. The prime minister had to angrily mandate attendance during the Cabinet meeting Sunday because several ministers had opted out upon learning they would not be included in the receiving line, according to Israeli media reports.

“It’s a four-hour wait, work hours, phone calls, mail, meetings. I have things to do in those four hours,” Culture Minister Miri Regev told Army Radio Monday ahead of Trump’s arrival. “To drag us there to stand as the scenery — that’s ugly. It’s beneath the dignity of the government of Israel and does not give any more respect to President Trump.”

In the end, Trump shook hands with all the ministers, as well as dozens of deputy ministers, religious leaders and the heads of the army, police and Mossad foreign intelligence service.

Under pressure from his political right, Netanyahu has insisted he is applying similar pressure. Last week he went as far as to release minutes from his February meeting at the White House that he claimed proved as much. But Netanyahu has made an effort to defer to Trump in a way he did not always with his predecessor, Barack Obama.

After the reported airport ultimatum Sunday, Netanyahu got the Cabinet to OK a raft of measures designed to signal goodwill to the Palestinians. They included the development of some West Bank industrial zones, opening the Allenby Bridge crossing between the West Bank and Jordan 24 hours a day and increasing building permits for Palestinians living in Area C of the West Bank, where Israel has full control. The Prime Minister’s Office later said the measures came at Trump’s request.

Also, in April, Netanyahu won Cabinet approval for new restrictions on settlement construction in a gesture to Trump. The vaguely formulated policy is to build new West Bank housing, whenever possible, in already built-up areas of settlements.

“This is a very friendly administration and we need to be considerate of the president’s requests,” Netanyahu explained to his ministers, according to Haaretz.

Right-wing members of the governing coalition, led by Bennett, have gone along with Netanyahu. But they have made clear that their loyalty has limits.

On Sunday, Bennett and Justice Minister Ayelet Shaked, both of the pro-settlement Jewish Home party, voted against the measure to boost Palestinian building in Area C. Bennett, the party’s leader, told fellow ministers over the weekend that the move amounted to a de facto change in borders for which Israel would receive nothing in return, Army Radio reported.

Although Bennett was part of the unanimous Cabinet vote in April to restrict settlement building, he immediately criticized the policy. Several other right-wing members of the coalition, including Likud lawmaker Yehudah Glick, expressed concerns that it amounted to a settlement freeze.

Most of the fire has been directed at Netanyahu for allegedly failing to push a right-wing agenda hard enough. Attacking the United States is not considered good politics in Israel, and politicians who heaped praised on Trump in the wake of his election in November may be hesitant to turn against him. But the Trump administration has recently tried their patience, including by backing off the president’s campaign promise to move the U.S. Embassy to Israel’s contested capital, Jerusalem, from Tel Aviv and by asking Israel to stop expanding settlements — if not to stop building them entirely.

When the White House released a pre-trip promotion video last week that featured a map of Israel without any of the territory Israel captured in the 1967 Six-Day War — the West Bank and the Golan Heights — Shaked told journalists, “I hope this is a matter of ignorance and not policy.”

Netanyahu will have a chance to explain his political situation to Trump in person when they meet in Jerusalem, first for work at the King David Hotel and later for dinner with their wives at the prime minister’s residence. How that will affect the speech Trump is slated to deliver at the Israel Museum on Tuesday remains to be seen.

But Bennett has promised to push ahead with a bill to annex Maale Adumim, a large settlement on the outskirts of Jerusalem, after Trump leaves. Even Issac Herzog, the head of Israel’s political opposition and the chairman of the center-left Labor Party, visited the city last week in what he said was a symbol to Trump that it must ““remain under the sovereignty of Israel, as part of an agreement on Jerusalem that will remain a united city.”