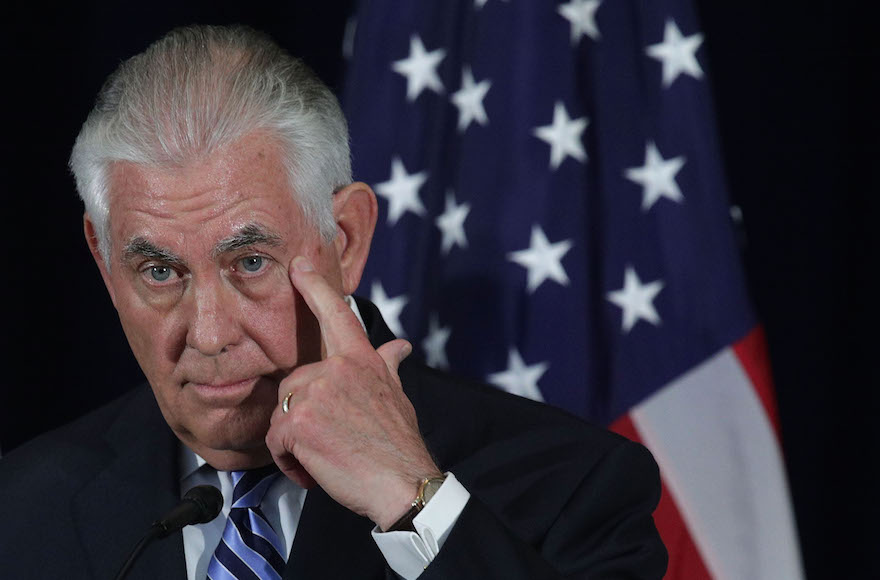 (JTA) — U.S. Secretary of State Rex Tillerson would not say that the Western Wall is part of Israel when asked about by a reporter during the presidential flight from Saudi Arabia to Israel.

Tillerson met with reporters in the back of Air Force One on Monday morning during the flight to the second stop on President Donald Trump’s first international trip since taking office.

Asked if he agrees with the U.S. ambassador to the United Nations, Nikki Haley, who last week asserted during an interview that “We’ve always thought the Western Wall was part of Israel,” Tillerson responded: “The wall is part of Jerusalem.” He did not expand on the statement.

The Western Wall is located in Jerusalem’s Old City and was captured by Israel during the Six-Day War in 1967. This week, Israel is marking 50 years since the reunification of the city.

Tillerson said the second leg of the journey was to “Tel Aviv, home of Judaism,” though Trump is not scheduled to visit Tel Aviv, confining his 28-hour visit to Jerusalem. Ben Gurion International Airport, where Trump landed, is sometimes called Tel Aviv, though it is about 15 miles away from the city.

The secretary of state told reporters that the time is right to resurrect the Middle East peace process because of the common threat of the rise of the Islamic State, other terror groups and extremism.

“There’s a unifying element in and of itself, and I think it does allow countries that have had deep differences to look at the situation and realize that in many respects our threats are common to all of us,” Tillerson said. “Providing a certain perspective that’s not been there in the past, a perspective that is between us. That there’s something larger going on that’s affecting all of us. We need to try and come together to address that. I think that creates a different dynamic.”

Asked if he would pressure Israeli Prime Minister Benjamin Netanyahu on settlements, Tillerson responded that “settlements are part of the overall peace discussion. It’s just there are a number of elements that have presented challenges to the peace process in the past; settlements is clearly one of those.”

Tillerson said that arranging a three-way visit among Trump, Netanyahu and Palestinian Authority President Mahmoud Abbas, who Trump will meet on Tuesday morning, would be too ambitious for such a short trip.

“I think there will certainly be opportunities for that in the future,” he said.

Asked if Trump would apologize to Israeli officials for sharing Israeli intelligence with Russian officials earlier this month, Tillerson responded, “I don’t know that there’s anything to apologize for.”