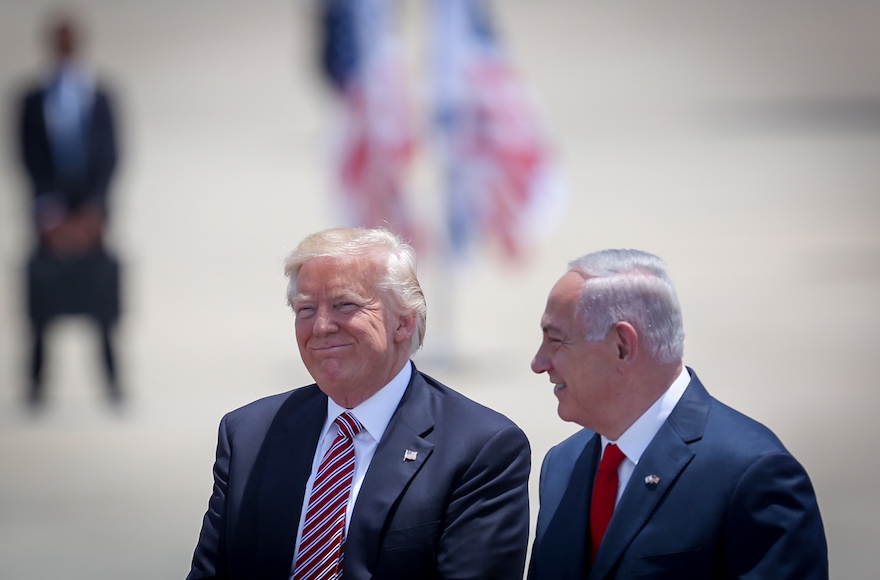 JERUSALEM (JTA) — President Donald Trump arrived in Israel for a whirlwind 28-hour visit, saying his trip to the region has given him “new reasons for hope.”

Air Force One touched down on the tarmac at Ben Gurion International Airport shortly after 12:30 p.m. Monday. The landing represented the first direct flight ever between Israel and Saudi Arabia, the first stop of Trump’s first international trip as president.

“I have come to this sacred and ancient land to reaffirm the unbreakable bond between the United States and the State of Israel,” Trump said in remarks at the welcome ceremony after he reviewed the honor guard and was welcomed by Israel’s leaders, Prime Minister Benjamin Netanyahu and President Reuven Rivlin.

Trump called Israel a “strong, resilient, determined and prosperous nation” and alluded to the Holocaust, saying the United States “will not allow the horror and atrocities of the last century to be repeated.”

He called his visit to the region a “rare opportunity” to bring peace and stability. “But we can only get there working together. There is no other way,” he said.

Netanyahu called the visit historic in that it is the first time that a U.S. president’s first trip abroad includes Israel.

“Thank you for this powerful expression of your friendship to Israel,” the prime minister said.

Netanyahu alluded to Trump’s speech to Muslim and Arab leaders in Riyadh the previous day.

“Mr. President, yesterday in Saudi Arabia you delivered a forceful speech on terrorism and extremism, called on forces of civilization to confront the forces of barbarism,” he said. “For 69 years, Israel has been doing just that. We’ve manned the front lines of civilization.”

Netanyahu reiterated his commitment to peace, pointing out that Israel has already made peace with Egypt and Jordan, adding that “Israel’s hand is extended in peace to all our neighbors, including the Palestinians. The peace we seek is a genuine one in which the Jewish state is recognized, security remains in Israel’s hands and the conflict ends once and for all.”

Speaking before Netanyahu, Rivlin said the Middle East and Israel need a strong United States, and the United States “needs a strong Israel.” He reminded Trump that Israel this week marks the 50th anniversary of the reunification of Jerusalem.

“It makes us very happy to know that Israel’s most important ally recognizes the significance of Jerusalem to the Jewish people all around the world,” Rivlin said. “Jerusalem is the beating heart of the Jewish people, as it has been for 3,000 years.”

Trump’s daughter Ivanka and son-in-law Jared Kushner landed in a second plane and sat with the American diplomatic delegation during the welcome ceremony.