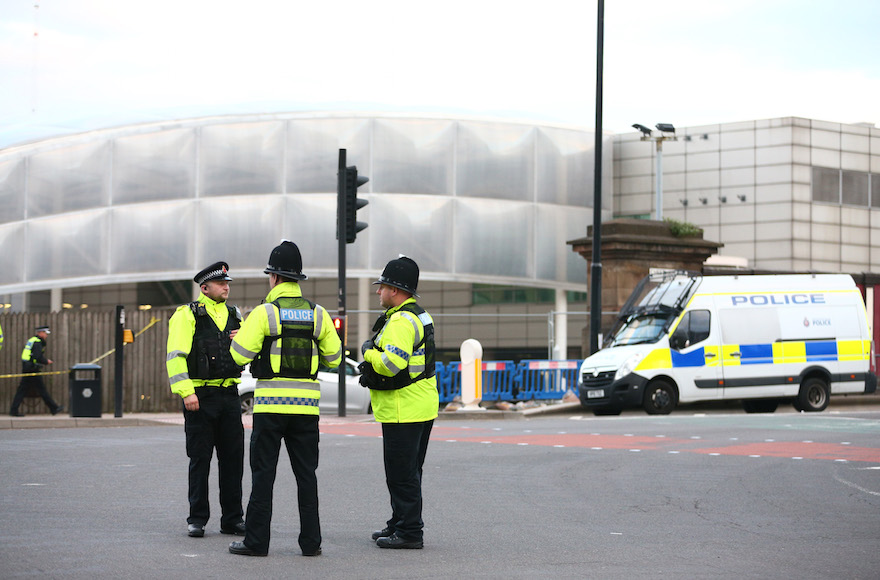 Police officers standing in front of the Manchester Arena on May 23, 2017 in Manchester, England, where a suspected suicide bomber killed 22. (Dave Thompson/Getty Images)
Advertisement

(JTA) – At least 22 people were killed in a suspected terrorist attack during a concert in northern England by the American pop star Ariana Grande.

Grande was not hurt in the explosion Monday night at the 21,000-seat Manchester Arena, which Prime Minister Theresa May said was likely a terrorist attack, The Guardian reported. British authorities said the explosion may have come from an explosive vest detonated in the crowd by a suicide bomber.

On Tuesday, the Islamic State terrorist group claimed responsibility for the bombing.

Many of the dozens wounded in the attack were teenagers and young adults, according to Reuters. Worried parents began arriving at the arena in search of their loved ones.

The attack was the deadliest in Britain since 2005 bombings in London left 52 people dead.

The European Jewish Congress condemned the “appalling and barbaric terrorist attack” in a statement issued hours after the bombing, which occurred as the concert was nearing its end.

“This horrific attack demonstrates once again that the enemies of civilization have no boundaries,” said Dr. Moshe Kantor, president of the EJC. “This was a concert attended by mostly youth and children and is a ghastly reminder that terrorism sees all of us as potential targets, regardless of age, religion, nationality or background.”

Israeli Prime Minister Benjamin Netanyahu in a statement condemned the attack and sent condolences to the families of the victims.

“Terrorism is a global threat and the enlightened countries must work together to defeat it everywhere,” he said.

“The world stands united in its resolve to confront and defeat the scourge of terrorism,” he said in a statement. “Our liberties and our way of life shall triumph.”

Grande, 23, wrote on Twitter that she was “broken” and “so sorry.” The singer grew up Catholic but left the faith over the treatment of homosexuals in favor of Kabbalah Jewish studies that in 2014 she said “changed her life.”

The attack comes about two weeks before the United Kingdom’s general election in which May, a hard-liner from the center-right Conservative Party, is running against the left-wing Labour under Jeremy Corbyn, who supports boycotting Israeli settlements and is widely perceived as having tried to promote better relations and understanding between mainstream British parties and groups associated with radical Islam.

May called an early election following the resignation last year of David Cameron, also a Conservative, who stepped down from the prime minister’s post following a referendum he called in which a majority of voters rejected his position that the United Kingdom should stay in the European Union. Immigration by Muslims and other foreigners played a central role in the debate about whether the kingdom should leave or remain within the bloc it helped establish in the 1970s.