‘I have a feeling the war is going to start tomorrow’: Three days in June 1967 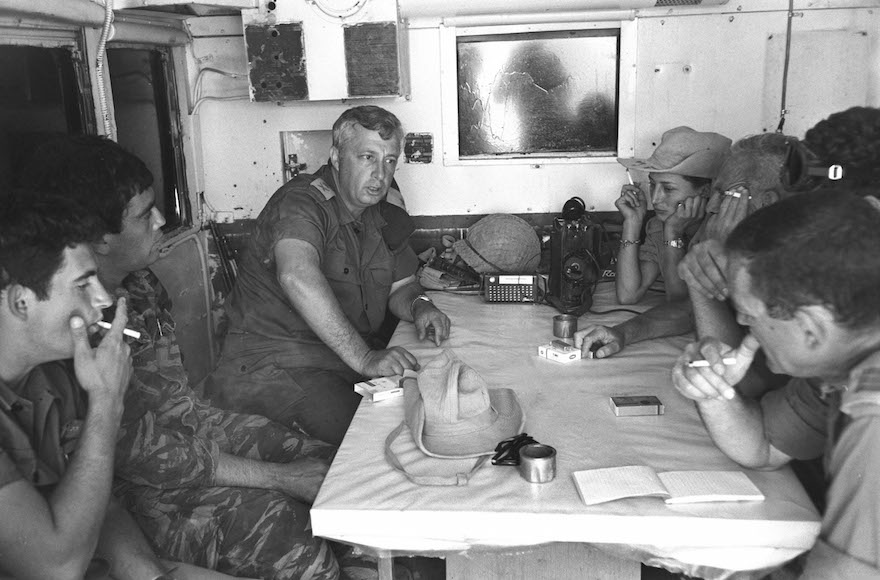 Ariel Sharon, third from left, meeting with his officers a week before the start of the Six-Day War, May 29, 1967 at their headquarters somewhere in southern Israel. (Micha Han/GPO via Getty Images)
Advertisement

Five days before the Six-Day War broke out in June 1967, the American reporter Abraham Rabinovich arrived in Jerusalem. When the war ended, he decided to remain and write an account of Israel’s lightning victory. Over the next two years he interviewed close to 300 soldiers and civilians.

In this excerpt from the 50th anniversary edition of “The Battle for Jerusalem: An Unintended Conquest,” Rabinovich recounts the days leading up to the war’s start and the decisions of the Israeli politicians and generals on the ground.

(JTA) — The date for war was fixed on Friday, June 2, 1967, the day after Prime Minister Levi Eshkol relinquished the defense portfolio to Israel’s military icon, Moshe Dayan. For two weeks, Eshkol had blocked his generals’ demand for a strike against Egypt, but the signing of a defense pact between Jordan and Egypt had finally convinced him that war was inevitable.

At a meeting with Eshkol and Chief of Staff Yitzhak Rabin, Dayan said that if the cabinet on Sunday approved a preemptive strike, the air force would carry it out the following morning. He rejected as irrelevant the army’s plans for attacking the Gaza Strip and the coastal guns overlooking the Tiran Straits, which Egypt had closed to Israel-bound shipping.

The army’s primary task, he said, was the destruction of Egypt’s tank divisions, the core of  its army. The brazenness of Egyptian President Gamal Abdel Nasser in sending his army into Sinai, banishing a U.N. buffer force, and closing the straits meant that he no longer feared Israel. Therefore, Dayan argued, his challenge must be met head-on. The army would bring the Egyptian tank formations to battle and leave the Straits of Tiran and Gaza Strip for later. Rabin said that nothing would be done to provoke the Jordanians in order not to draw forces away from the Egyptian front. Jerusalem’s Old City was on no one’s agenda.

Air Force Commander Motti Hod had never revealed details of the preemptive strike to his colleagues on the general staff. Even now, at a meeting Saturday night, June 3, he revealed only one element: zero hour. The planes would strike at 7:45 a.m. Intelligence knew that the Egyptian air force mounted patrols from first light until 7 a.m. in anticipation of a possible Israeli attack out of the rising sun. At 7:45 the Egyptian pilots would be back at their bases having breakfast. Senior commanders lived off base and arrived about 8 a.m. They would still be in their cars when the planes struck. At zero hour, Israel’s armored divisions would shed camouflage netting and cross into Sinai.

Dayan, in his first press conference as defense minister that Saturday night, declared that the time for a spontaneous response to the closing of the straits had passed. A diplomatic solution, he said, would now be sought. At an English-language newspaper in Jordanian Jerusalem, skeptical journalists joked that they should run Dayan’s soothing remarks under the headline “Israel about to attack.”

Sunday morning, at the crucial cabinet meeting, several ministers asked that a decision be put off, but for the first time Eshkol came out clearly for war. Washington’s objection to an Israeli first-strike, while officially still in place, had softened,  he said, in the wake of the Jordanian-Egyptian pact. Washington had not flashed a green light, “but the light was no longer red.”

Dayan warned that if the Egyptians struck first (“to do to us what we want to do to them”), one of their first targets would be the nuclear reactor at Dimona, which the Egyptians believed was about to come on line. “Our only chance of winning the war is to initiate it and shape it,” he said. The cabinet voted 12-2 for military action.

Gen. Hod summoned his base commanders after the cabinet decision and informed them that the long-mooted attack would be launched in the morning. In the first wave, 160 planes would attack. Only 12 planes would remain behind  to guard Israel’s airspace.

Gen. Uzi Narkiss, commanding the Jordanian front, met Sunday night with his brigade commanders for a final briefing. He had been informed of the cabinet’s decision but gave no hint of it to his officers. On a wall map, an intelligence officer reviewed the Jordanian deployment. Five infantry brigades on the West Bank had been reinforced by an additional brigade, held in reserve 10 miles east of Jerusalem. Troops had been shifted in substantial numbers from rear encampments to the front line and Jordan’s two armored brigades were poised to cross the Jordan River to the West Bank. A large Iraqi force was expected to take up positions threatening  Israel’s narrow waist within a few days.

At Narkiss’ request, his brigade commanders rose in turn to outline their operational plans. The commander of the Jerusalem Brigade, Col. Eliezer Amitai, was restrained. The Jordanian army was considered the best in the Arab world. In the War of Independence, the Israeli army had failed to dislodge it from any  fortified position. The British officers who commanded the Arab Legion, as it was known then, were dismissed by Hussein a decade later and replaced by Jordanian officers but the army’s reputation remained.

Israel’s Jerusalem Brigade had more than twice as many men as the Jordanians opposite them in the city but it was a hometown unit of reservists, many of them over 30. Contingency planning called for an elite regular army unit to break through stout Jordanian defenses to relieve the 120-man garrison on Mount Scopus, a mile behind Jordanian lines, if it was threatened. But it was doubtful whether elite units could be spared for the task in a multi-front war.

At an Israeli position on Mount Zion, adjacent to the Old City, a platoon commander challenged one of his men to chess Sunday evening. There was little conversation as they concentrated on the board. Suddenly the officer looked up and said, “I have a feeling the war is going to start tomorrow.”

At Tel Nof air base, pilots were wakened at 3:45 a.m. on Monday, June 5. Filing into the briefing room, their eyes focused on the terse announcement on the blackboard: “Zero Hour 0745.” When all were seated, the squadron leader said, “Good morning. We go to war with Egypt today.”

In nearby orange groves, Col. Motta Gur’s reserve paratroop brigade had spent the night in anticipation of boarding troop carriers for a jump into Sinai. An officer rose before dawn and looked expectantly towards the air base but could see no sign of unusual activity. The troops were wakened at six, and the orchards were soon bustling. The men were making coffee when a succession of roars erupted from the airbase. As the sound intensified, planes began to rise above the tree line — dozens of them following each other into the sky like children playing tag. Low-slung with bombs and rockets, the aircraft wove themselves into formations of four and headed southwest at treetop level. At the airfield, a mechanic wept as the planes swept past him, wave after wave, glinting in the sky like a sword unsheathed. In the orchards the paratroopers watched in silence, awed by what they were seeing and by what they knew must come. They then drifted off to write postcards home. “We’re seeing the start of the war,” wrote one. “We hope it’s finished soon. We’ll do what we can to finish it soon.”

In the afternoon, Col. Gur was informed that the fast-moving tank divisions in Sinai would overrun the paratroopers’ planned target.  The brigade was being sent instead to Jerusalem to break through to Mount Scopus. No one in authority mentioned the Old City. Some, however, were beginning to think about it.

(Abraham Rabinovich is a journalist born and raised in New York City. He is the author of six books, including “The Yom Kippur War,” “The Boats of Cherbourg” and “Jerusalem on Earth.” He lives in Jerusalem.)