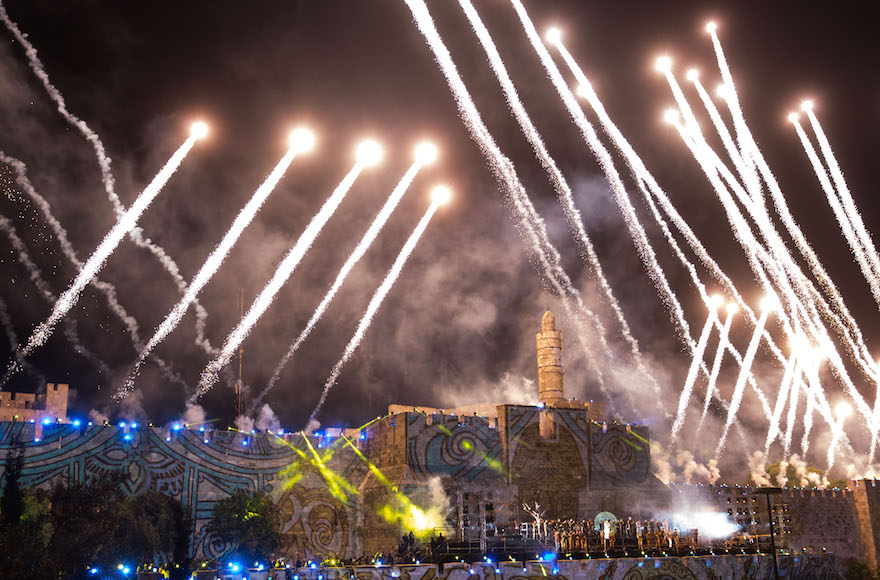 The walls of Jerusalem's Old City are projected with video art during a ceremony marking the 50th anniversary of Jerusalem's reunification and the 1967 War, May 21, 2017. (Hadas Parush/Flash90)
Advertisement

JERUSALEM (JTA) — Tens of thousands gathered in Jerusalem to celebrate the 50th anniversary of the city’s reunification.

Ceremonies and events took place throughout Wednesday in the Israeli capital to mark the annual observance of Jerusalem Day. Among the events were memorials for soldiers killed in the Six-Day War in 1967. A state memorial also was held at Mount Herzl cemetery for the thousands of Ethiopians who died on the way to Israel.

Thousands of young people were scheduled to participate in the flag march through Jerusalem, including in the Muslim Quarter of the Old City. Hundreds of police were deployed in the city to prevent clashes.

The Knesset held a special session to mark Jerusalem Day.

The Temple Mount and the Western Wall “will forever remain under Israeli sovereignty,” Israeli Prime Minister Benjamin Netanyahu said in an address to the Knesset session.

“Some see the Six-Day War as a disaster for Israel. I see it as Israel’s salvation. How could we keep existing with a narrow waist and daily danger to our citizens?” Netanyahu said.

Netanyahu also said he was moved to see President Donald Trump standing in front of the Western Wall earlier this week. The president’s visit to the site “destroyed UNESCO’s propaganda and lies,” Netanyahu said, referring to several resolutions passed in recent months by the United Nations body ignoring Jewish ties to the city and its holy sites.