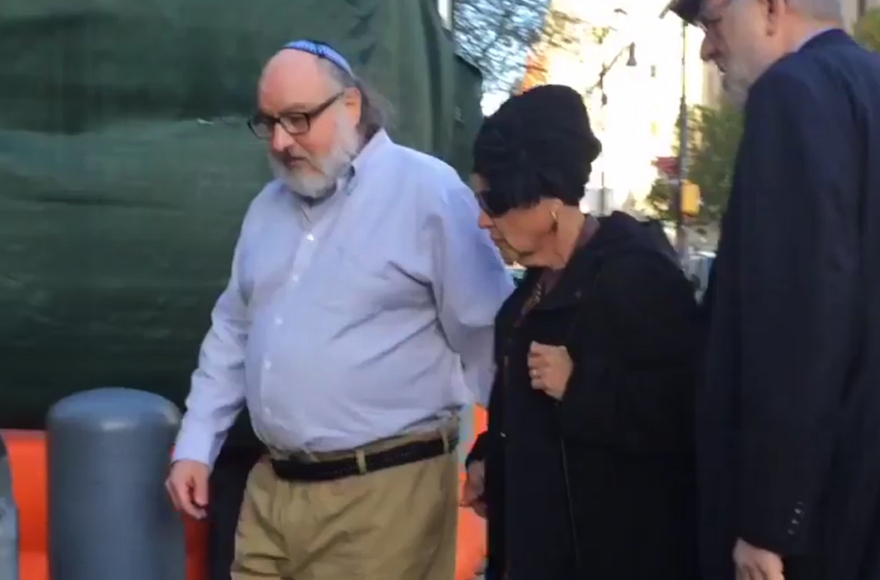 Jonathan Pollard, left, arrives at a federal courthouse in New York with his wife, Esther, to check in at a probation office just hours after he was released from prison, Nov. 20, 2015. (Ilana Gold/WCBS-TV via AP Images)

The 2nd U.S. Circuit Court of Appeals in Manhattan issued the judgment on Wednesday, a week after hearing arguments.

The parole terms issued upon Pollard’s release from a federal prison in November 2015 after serving 30 years of a life sentence require him to stay in his New York home from 7 p.m. to 7 a.m.; to submit any computer he uses for inspection, and to wear a GPS-monitoring device at all times. The device means that Pollard, who is Orthodox, is forced to violate Shabbat observance, his lawyer has said.

Pollard, 62, also must remain in the United States for five years, despite his desire to move to Israel.

Pollard’s attorney argued that the terms are overly severe because Pollard cannot remember the classified information he provided in 1984 and 1985 to Israeli officials and that he is not a flight risk, Reuters reported.

Pollard pleaded guilty in 1986 to conspiracy to commit espionage in connection with providing Israeli contacts with hundreds of classified documents he had obtained as a civilian intelligence specialist for the U.S. Navy.