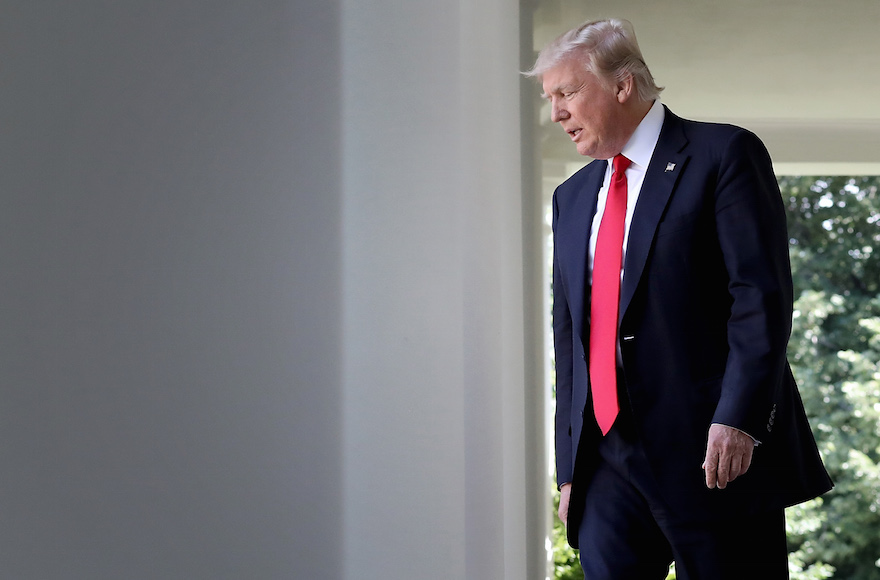 President Donald Trump arriving in the Rose Garden of the White House to announce his decision to withdraw the United States from the Paris climate agreement, June 1, 2017. (Win McNamee/Getty Images)
Advertisement

(JTA) — President Donald Trump on Thursday said he will withdraw the United States from the landmark 2015 global agreement to fight climate change, earning statements of dismay from critics, including Jewish groups who regard the pullout as a diplomatic and environmental disaster.

Speaking Thursday at ceremony in the White House Rose Garden, Trump said the so-called Paris accords, signed by every country except for Syria and Nicaragua, place “draconian” financial and economic burdens on American businesses and taxpayers and give other countries a trade advantage over the United States.

“As someone who cares deeply about our environment, I cannot in good conscience support a deal which punishes the United States,” he said. “The Paris accord is very unfair at the highest level to the United States.”

Rabbi Jonah Dov Pesner, director of the Religious Action Center of Reform Judaism, issued a statement on behalf of the Reform movement saying the announcement was “an abdication of responsibility to address global climate change and is both physically dangerous and morally reprehensible.

“The decision disregards vitally important environmental efforts to protect both our planet and the population, with consequences that will reverberate for generations,” wrote Pesner. “Reneging on the agreement diminishes U.S. leadership and undermines longstanding alliances, placing an undue burden on other nations to address climate change.”

American Jewish World Service, which advocates for people in developing nations, said such countries would bear the brunt of the severe storms, flooding, droughts and famine that a scientific consensus regards as the already apparent signs of the effects of man-made global warming.

“The longer the U.S. denies climate change and fails to take responsibility for its outsized contribution to global warming, the greater the risk posed to the entire world, especially the poorest people on Earth,” said Robert Bank, president and CEO of AJWS, in a statement.

Added Bank: “We stand proudly as Jews who cherish the Earth to object in the strongest terms to the President’s shortsighted and damaging decision. As American Jews, we will continue to raise our voices in solidarity with the people worldwide who have done the least to cause global warming but who suffer the most.”

Following Trump’s announcement of the pullout, former New York City Mayor Michael Bloomberg announced that his foundation, Bloomberg Philanthropies, would be donating $15 million to the United Nation’s Climate Secretariat, which aids implementation of the Paris accords. The donation replaces the money the United States would have contributed.

Bloomberg, the world’s 10th richest person, serves as the U.N Secretary General’s special envoy for cities and climate change. In that capacity, he is coordinating climate efforts among local governments, including an American group of 30 mayors, three governors, more than 80 university presidents and more than 100 businesses that will submit an independent pledge to be included in the Paris accords, according to the New York Times.

Vatican officials also signaled their dismay with Trump’s decision. The Catholic church strongly supported the climate accords. Last month, the Union for Reform Judaism, AJWS and the Coalition on the Environment and Jewish Life joined 20 other religious groups in urging Trump to adhere to the agreement, which was reached in 2015 and signed in 2016.

Republicans largely applauded Trump’s decision to pull out of the accords, although reports indicated that there was opposition among some of his closest advisers, including Gary D. Cohn, the director of the National Economic Council; Ivanka Trump, the president’s daughter and unpaid adviser, and Secretary of State Rex W. Tillerson.

Neither Ivanka Trump nor her husband attended the announcement ceremony, which fell on the second day of the Jewish holiday of Shavuot. Both are observant Jews.