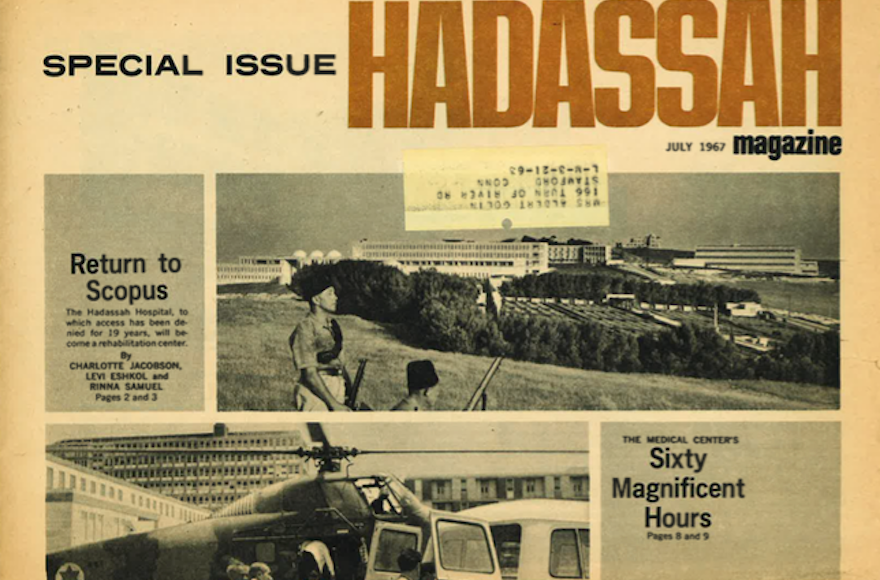 (JTA) — When Israel won the Six-Day War, many people considered it a miracle. Not only did the small country beat the armies of three Arab countries — Egypt, Jordan and Syria — it also succeeded in returning Jewish control to Jerusalem after nearly 2,000 years.

While histories of the war are more likely to credit superior military planning over divine intervention, that sense of awe is evident in the accounts of those who were in the country during (and immediately following) the war.

The excerpts of the stories below, which were published in Hadassah Magazine’s July 1967 issue, describe Elie Wiesel’s visit to the Western Wall after the war, how the Hadassah hospital managed to treat the war’s wounded despite severe staff shortages and the reopening of its Mt. Scopus campus, which had been under Jordanian control since 1948.

Elie Wiesel on visiting the Western Wall after Jerusalem’s reunification 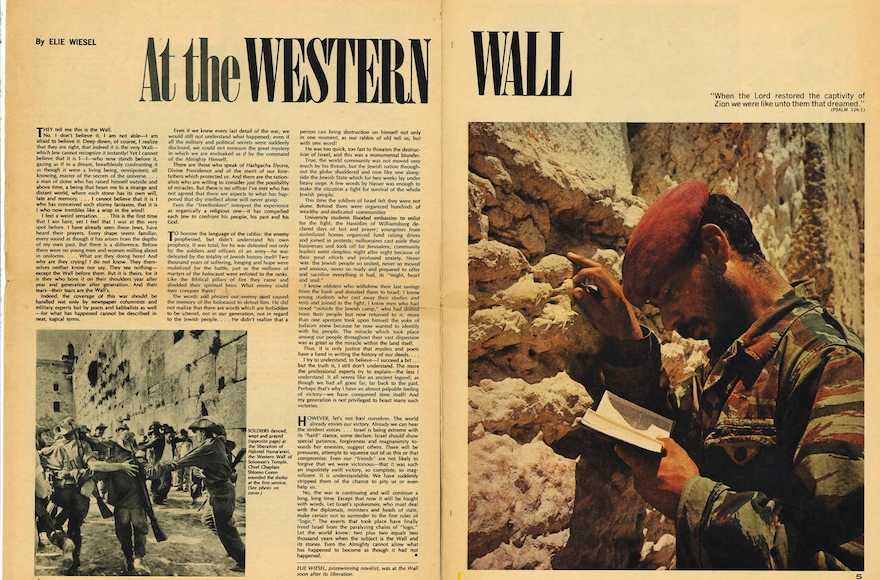 The reunification of Jerusalem was perhaps the most significant accomplishment of the Six-Day War. The Old City had not been under Jewish rule for nearly 2,000 years and it had been under Jordanian control since 1948, which meant that Jews could not visit the Western Wall.

Elie Wiesel visiting the Western Wall shortly after the war. Here, the award-winning writer and Holocaust survivor, who had not yet been awarded the Nobel Peace Prize, wrote about the disbelief he felt at visiting the Jerusalem site, a historical remnant of the Temple Mount.

“They tell me this is the Wall. No. I don’t believe it. I am not able — I am afraid to believe it. Deep down, of course, I realize that they are right, that indeed it is the very Wall — which Jew cannot recognize it instantly! Yet I cannot believe that it is I — I — who now stands before it, gazing as if in a dream, breathlessly confronting it as though it were a living being, omnipotent, all knowing, master of the secrets of the universe. … a man of stone who has raised himself outside and above time, a being that bears me to a strange and distant world, where each stone has its own will, fate and memory. … I cannot believe that it is I who has conceived such stormy fantasies, that it is I who now trembles like a wisp in the wind!”

How Hadassah Hospital operated while doctors were away fighting 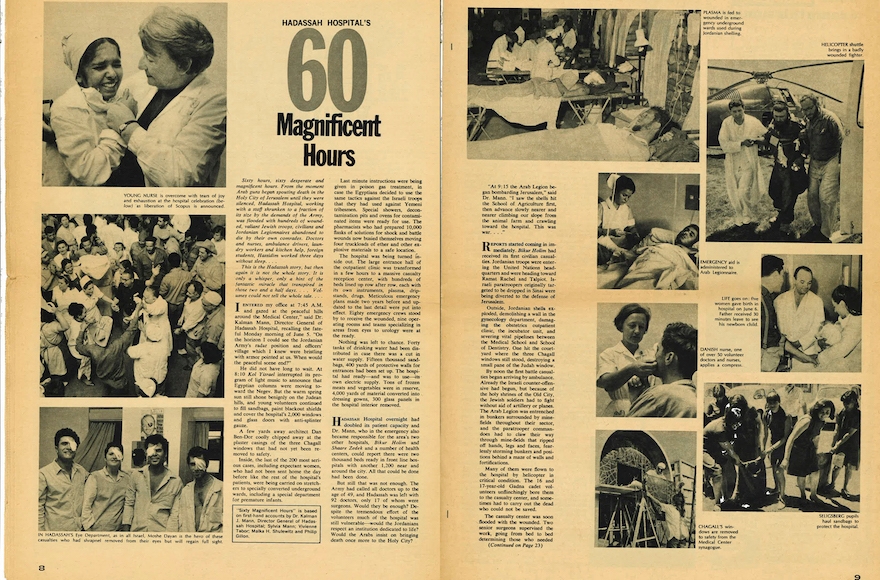 During the war, Hadassah Hospital, which was operating from its campus in Ein Kerem, a village sout west of Jerusalem, treated wounded soldiers — both Arab and Israeli — and civilians, in addition to its usual patients. At the same time, the hospital grappled with a severely limited staff — all doctors up to the age of 49 had been called up into battle. Plus, the hospital sustained damage from Jordanian shells.

But staff didn’t let that get in the way of ensuring patients got proper treatment.

“The hospital was being turned inside out. The large entrance hall of the outpatient clinic was transformed in a few hours to a massive casualty reception center, with hundreds of beds lined up row after row, each with its own instruments, plasma, drip stands, drugs. Meticulous emergency plans made two years before and updated to the last detail were put into effect. Eighty emergency crews stood by to receive the wounded, nine operating rooms and teams specializing in areas from eyes to urology were at the ready. Nothing was left to chance. Forty tanks of drinking water had been distributed in case there was a cut in water supply. Fifteen thousand sandbags, 400 yards of protective walls for entrances had been set up. … Hadassah Hospital overnight had doubled its patient capacity and [Director General] Dr. [Kalman] Mann, who in the emergency also became responsible for the area’s two other hospitals, Bikur Holim and Shaare Zedek and a number of health center, could report there were two thousand beds ready in front line hospitals with another 1,200 near and around the city. All that could be done had been done.” 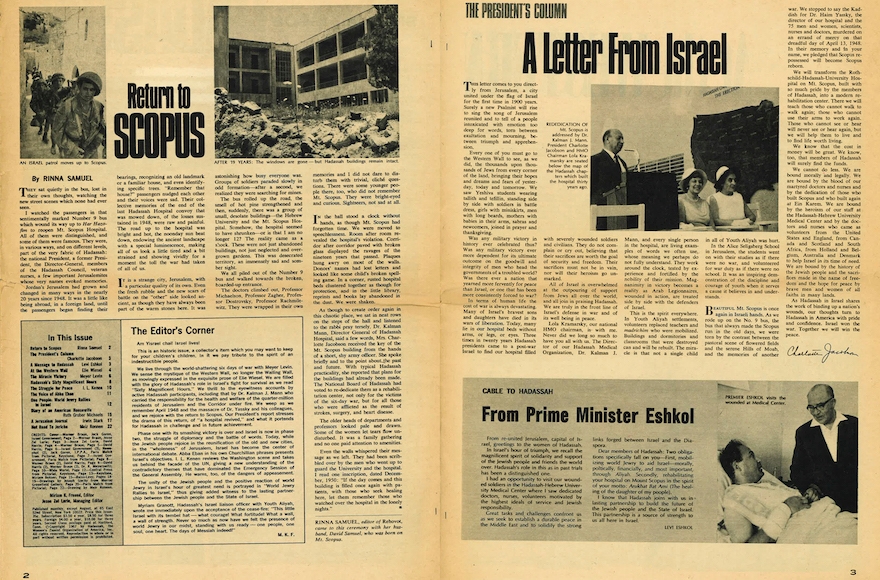 Journalist Rinna Samuel covered the re-opening of the Hadassah Hospital on Jerusalem’s Mt. Scopus, which had been closed since 1948 after Jordan took control. The mood was both one of excitement, as hospital leadership and staff members returned to their former place of work, and sadness, as they saw how the hospital had been vandalized under Jordanian control, and were reminded of the losses incurred there during Israel’s War of Independence. Here, Samuel recounts the bus ride up to Mt. Scopus.

“Jordan’s Jerusalem had grown and changed in many ways in the nearly 20 years since 1948. It was a little like being abroad, in a foreign land, until the passengers began finding their bearings, recognizing an old landmark or a familiar house, and even identifying specific trees. ‘Remember that house?’ passengers nudged each other and their voices were sad. Their collective memories of the end of the last Hadassah Hospital convoy that was mowed down, of the losses sustained in 1948, were raw and painful. … In the hall stood a clock without hands, as though Mt. Scopus had forgotten time. We were moved to speechlessness. Room after room revealed the hospital’s violation. Corridor after corridor paved with broken glass displayed the ravages of the nineteen years that passed.”