How Hank Greenberg took on Hitler in the summer of 1938 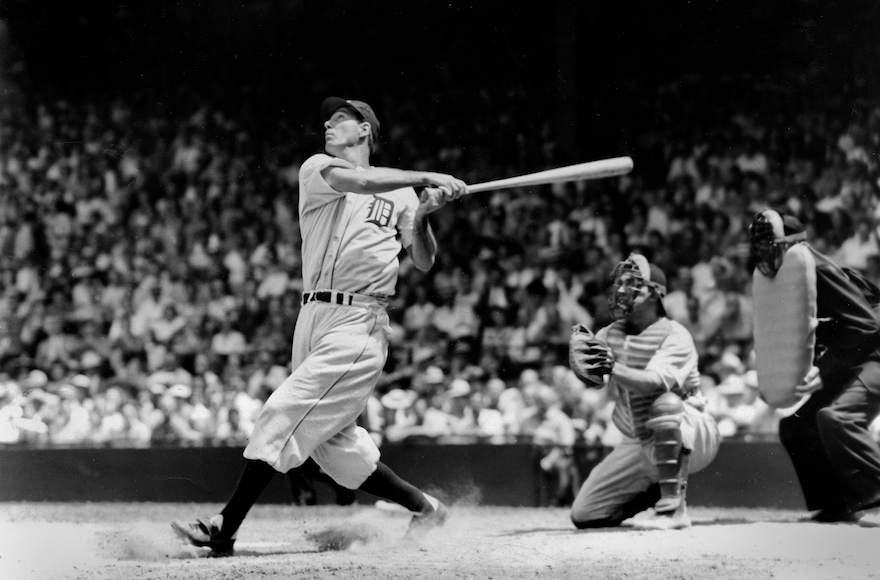 WHIPPANY, N.J. (New Jersey Jewish News via JTA) — With a lifetime of loving and writing about sports, Ron Kaplan has many topics he can sink his teeth into. Add to that passion his time working for the American Jewish Congress and then for nearly a decade for the New Jersey Jewish News, and you can see why his publisher saw him as the perfect guy to tackle the subject of his new book.

“Hank Greenberg in 1938: Hatred and Home Runs in the Shadow of War” (Sports Publishing, 2017) is about the Jewish Hall of Famer as he was trying to make baseball history at the same time that prejudice against Jews was reaching a murderous boiling point in Europe.

But Kaplan faced a challenge: There were already at least 10 books about the Detroit Tigers slugger, as well as Aviva Kemper’s award-winning documentary, “The Life and Times of Hank Greenberg.” None, however, had brought together the unique combination of factors that made 1938 a turning point in baseball and world history.

Kaplan spoke to those who knew Greenberg, including the celebrated sportswriter Ira Berkow, who had worked with the player on his memoir. Folks at the Baseball Hall of Fame helped with research, and Kaplan mined newspapers from the period.

They opened a window into a time when new cars sold for $600 and refrigerators for $200, a star like Greenberg earned $30,000, and awareness of the conflict brewing in Europe mushroomed. In the course of 1938, Kaplan said, reports on the growing Nazi threat went from small paragraphs to front-page stories with huge headlines, while the United States remained reluctant to accept Jewish refugees trying to flee Nazi oppression.

As Kaplan — an award-winning journalist and blogger — wrote, “Hammerin’ Hank” was coming off a stellar season with the Tigers, during which he hit 40 homers and drove in 184 runs. But as he was “on course for Babe Ruth’s home run record, Hitler’s ‘Final Solution’ was beginning to take shape.” Jews across the United States, worried about looming threats overseas, “looked to Greenberg as a symbol of hope,” Kaplan wrote.

“Though normally hesitant to speak about the anti-Semitism he dealt with, the slugger still knew the role he was playing for so many of his people, saying, ‘I came to feel that if I, as a Jew, hit a home run, I was hitting one against Hitler.’”

In the present climate, Kaplan told NJJN, with arguments roiling about Syrian refugees, the debate over President Donald Trump’s use of the  “America First” slogan popularized by the isolationist and anti-Semitic Charles Lindbergh, and reports of increasing anti-Semitism, “unfortunately, some of the issues from 1938 are still with us.”

Delving deep into Greenberg’s life, talking to those who knew him and reading everything available, Kaplan affirmed his highest expectation.

“He was always a mensch,” the author said.

That quality was called into play in ’38 as the tall, powerfully built Greenberg— one of the few Jews in the game, playing in one of the most anti-Semitic cities in the country — tried to break Ruth’s home run record. While crowds loved him and much of the country cheered him on, some didn’t want to see a Jew claim the crown from the mighty Babe. Kaplan said the belief was that some pitchers deliberately walked Greenberg to prevent his reaching the goal.

Greenberg would finish with 58 homers, three shy of Ruth’s record.

“But Greenberg refused to ever use anti-Semitism as an excuse,” said Kaplan, who noted the first baseman had a slow start and a rainy spring forced the Tigers to play a series of fatiguing late-season doubleheaders.

However, Greenberg, who died in 1986, was always mindful of prejudice. His last year as a player coincided with Jackie Robinson’s first, and he made his support and respect clear to the first black player in the major leagues — something Robinson mentioned repeatedly to his own biographers.

Greenberg’s success on the field did not divert his attention from what was happening in the wider world. In a brief overview of what came after 1938, Kaplan described how Greenberg was one of the first baseball pros to enlist in the Army, in 1941. In his prime playing years, he put the game aside and entered the military. After an honorable discharge, he re-enlisted in the Army Air Forces, serving until the end of the war.

“He was a celebrity but he didn’t just do morale-boosting tours with no active duty,” Kaplan said. “He was actively involved, on bombers in the Chinese theater and the Burma theater.”

Only toward the end of the war did Greenberg take a less active role, serving in a more administrative capacity.

And then, with characteristic aplomb, he went right back to playing for the Tigers, leading the team to the 1945 World Series championship.

In writing this book, Kaplan drew on a lifetime of sports fandom. His first book was “501 Baseball Books Fans Must Read Before They Die.” His second, “The Jewish Olympics: The History of the Maccabiah Games,” published in 2015, broke ground on a subject that had received almost no mainstream coverage. In addition to his own popular and meticulous blogs — Ron Kaplan’s Baseball Bookshelf and Kaplan’s Korner on Jews and Sports — he helped launch JTA’s Jewish Sports Facebook page.

Kaplan lives in Montclair with his wife, Faith Krausman, a veterinarian as well as an author, and their daughter, Rachel, a photographer. They are members of Bnai Keshet, a Reconstructionist synagogue in Montclair, New Jersey.

Next up, if Kaplan stays with his current game plan, is a work about players who were, well, “next up.” Provisionally titled “On Deck to History,” it will feature anecdotes and interviews with players waiting their turn at bat during some of the greatest moments in the sport.

Kaplan cited an example, also about another record held by “The Bambino”: Dusty Baker, the longtime player and manager, was on deck when another Hammerin’ Hank — Atlanta Braves legend Hank Aaron — hit the home run that broke Ruth’s lifetime record of 714. It is just such a moment that a sports fan and storyteller can’t resist.