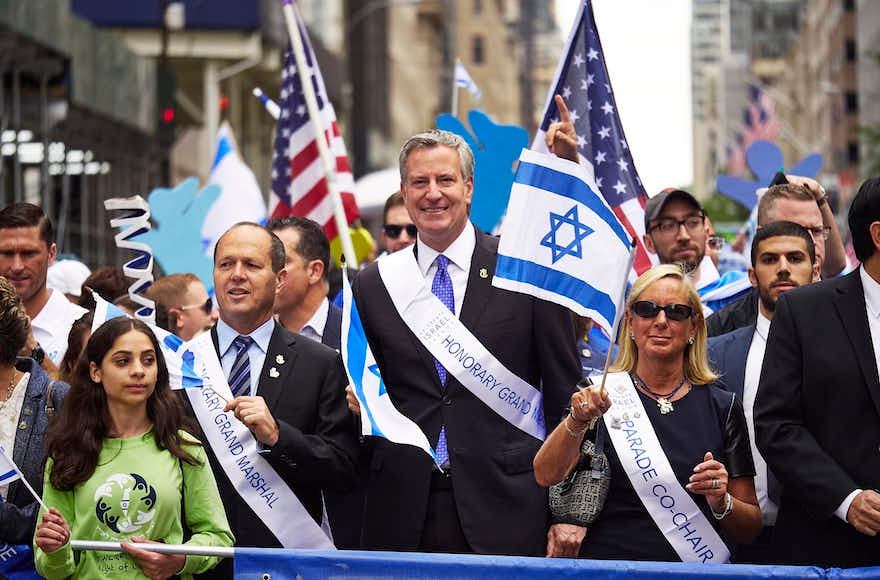 (JTA) — Tens of thousands of people lined Manhattan’s Fifth Avenue to show their support for Israel.

Nine members of Israel’s Parliament were scheduled to march in the parade, as were Israel’s Ambassador to the United Nations Danny Danon and Jerusalem Mayor Nir Barkat.

New York Gov. Andrew Cuomo and New York City Mayor Bill De Blasio were in attendance. Some 30 floats and 11 marching bands were scheduled to be part of the parade.

Cuomo was joined in the parade by Chemi Peres, son of the late former Israeli Prime Minister Shimon Peres. Prior to the parade Cuomo declared the day, and every first Sunday of June, Shimon Peres Day in New York.

The parade was protested by activists from IfNotNow, the Jewish anti-establishment group, who attempted to block the route carrying a sign reading “No Celebration of Occupation.” Police intervened, walking between the marchers and protesters.

Seven activists were arrested during the parade, according to Jewish Voice for Peace, which coordinated the more than 100 counter demonstrators. One group of activists blocked De Blasio and his contingent, protesting the New York Police Department’s long-standing relationship with Israeli security, enhanced by police exchange programs which bring local law enforcement officials to Israel to study their methods, which JVP calles “an exchange of worst practices.”

A group of queer Jews staged a sit-in to disrupt the parade’s LGBTQ contingent, holding signs reading “No pride in apartheid” and “Queer Jews for a free Palestine.”