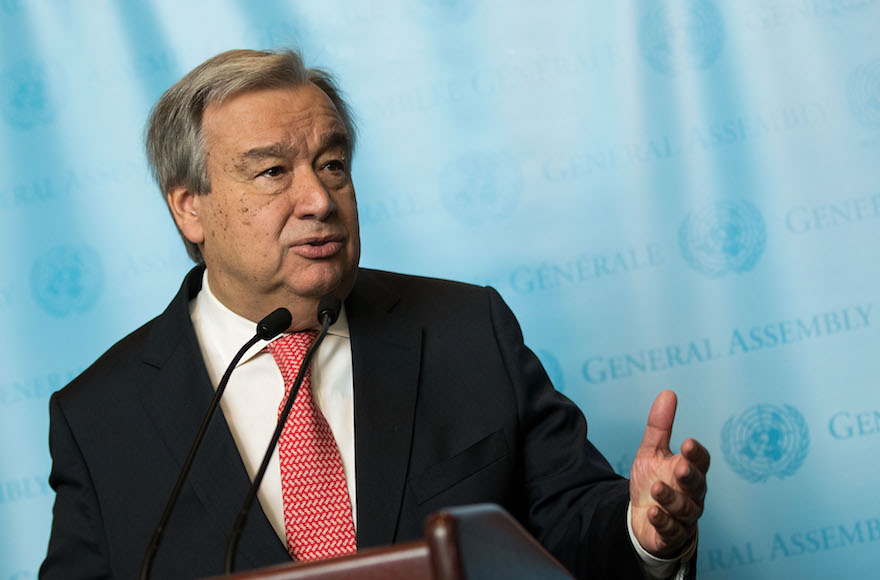 NEW YORK (JTA) — U.N. Secretary-General Antonio Guterres criticized Israel’s occupation of the West Bank and called for the establishment of a Palestinian state in a statement marking the 50th anniversary of the 1967 Six-Day War.

The statement, issued Monday, said the war “resulted in Israel’s occupation of the West Bank, East Jerusalem, Gaza and the Syrian Golan and the displacement of hundreds of thousands of Palestinians and Syrians.”

Guterres criticized Israel’s military control of Palestinian areas, saying it endangers both Israelis and Palestinians. He called for the establishment of a Palestinian state through “direct negotiations to resolve all final status issues on the basis of relevant UN resolutions, agreements and international law.”

“This occupation has imposed a heavy humanitarian and development burden on the Palestinian people,” the statement said. “Its perpetuation is sending an unmistakable message to generations of Palestinians that their dream of statehood is destined to remain just that, a dream; and to Israelis that their desire for peace, security and regional recognition remains unattainable.”

Israel captured the West Bank, eastern Jerusalem, the Gaza Strip, the Sinai Peninsula and the Golan Heights during the 1967 war, which broke out after Egypt, Syria and Jordan mobilized to attack Israel. Israel returned the Sinai to Egypt after signing a peace treaty in 1979, formally annexed the Golan Heights in 1981 and withdrew its troops and settlers from the Gaza Strip in 2005. The current government maintains that Israel’s military control of the West Bank is not an occupation, though the international community and some Israeli leaders disagree.

The Anti-Defamation League criticized Guterres’ statement, saying that it focuses on the war’s impact while omitting context on the Israeli-Arab conflict and why the war broke out.

“While we share his desire for a return to negotiations to achieve a two state solution, this anniversary cannot be viewed in a vacuum,” ADL’s national director, Jonathan Greenblatt, said in a statement. “It is grossly misleading to examine only the enduring effects of the war while ignoring the context in which the war took place — the belligerence of the Arab states in the spring of 1967, and the silence of the international community in the face of these threats and its failure to ensure the rights to free passage of international waterways.”