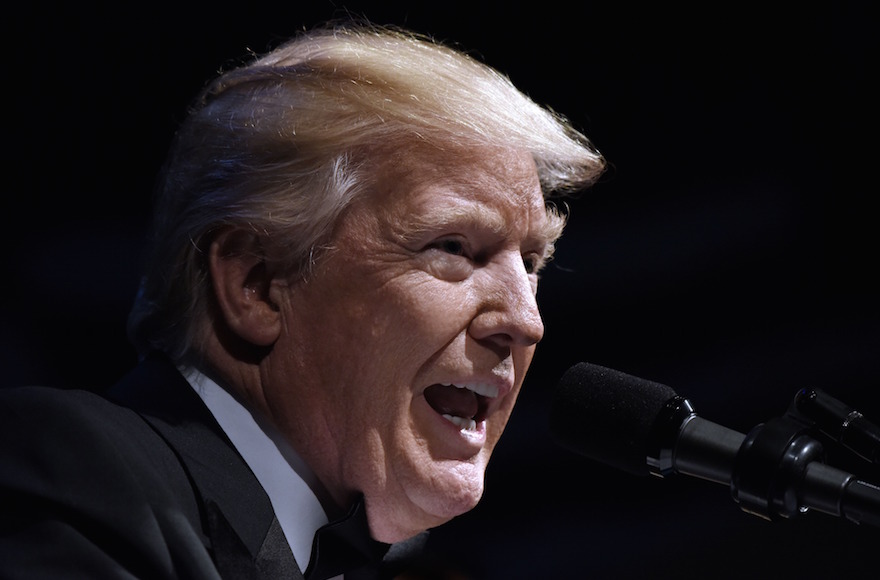 That was the year your great-uncle or long-lost cousin couldn’t resist passing on rumors, hoaxes and conspiracy theories about Barack Obama, Hillary Clinton, Sarah Palin, the true causes of 9/11 or the insidious nature of Islam. It wasn’t the invention of Fake News, but it provided the template for how social media users in 2016 would ignore obvious red flags to pass on bogus stories that confirmed their worldviews.

What happened to that elderly snow bird, who interrupted his nonstop viewing of Fox News only to fire off angry messages and unfounded rumors about The Other? Apparently, we elected him president.

In the hours after Saturday night’s terrorist attack in London, the president sent off a series of tweets that transformed the kind of event that usually unites the West in grief and determination into yet another episode of Trump Vs. World.

Somewhere between citing an early Drudge Report link on the London Bridge killings and calling out London’s Muslim mayor Sadiq Khan, the president used the killings to defend his travel ban, toss scorn on gun control and decry political correctness. It was a typical week of his presidential campaign boiled down to a few hours of 140-character messages.

“We need to be smart, vigilant and tough,” tweeted a president whose administration is woefully understaffed and whose top law enforcement agency lacks a director. “We need the courts to give us back our rights. We need the Travel Ban as an extra level of safety!”

This came even before he extended condolences to the victims of the London attack or offered America’s support to Britain and its leaders: “Whatever the United States can do to help out in London and the U. K., we will be there – WE ARE WITH YOU. GOD BLESS!”

That out of the way, it was back to politicizing the attacks: “We must stop being politically correct and get down to the business of security for our people. If we don’t get smart it will only get worse.”

It’s not clear what Trump had in mind other than the court case over his attempt to ban travelers from several predominately Muslim countries. That’s the problem with Twitter and, increasingly, the Trump administration: Even on points where both sides ostensibly agree — protecting citizens from terror — the president governs by slogans, not policy. Some might argue that is a good thing: If his policy-making were as impulsive as his tweeting, who knows what kind of global mischief or military disaster he might lead the country into.

But like those emails from Florida, Trump’s tweets derail serious policy discussion. The talking heads line up on cable news, the editorials get written, and we’re no closer than we were before to understanding what really needs to be done in times of stability or crisis. Instead we talk about Trump. He isn’t acting presidential! He’s using disaster to score cheap political points! He’s still campaigning!

This sounds like a partisan gripe, although for the life of me I can’t figure out which side wins when Trump gets into Cranky Grandpa mode. Even his supporters argue that the daily crises of his own making are distracting from his broader agenda.

Perhaps most disturbing of all his tweets over the weekend was his unfounded but completely characteristic attack on Khan, by all accounts a popular mayor and real mensch. “At least 7 dead and 48 wounded in terror attack and Mayor of London says there is ‘no reason to be alarmed!'” Trump tweeted Sunday morning, accusing Khan of being blase in the face of the attacks.

Perhaps Trump misunderstood what Khan had really said. The mayor, soon after the attack, told the BBC that he was “appalled and furious that these cowardly terrorists would target” innocent civilians. He vowed that “we will never let them win, nor will we allow them to cower our city.”

He then assured London residents who would see increased police presence around the city. “No reason to be alarmed. One of the things the police, all of us, need to do is make sure we’re as safe as we possibly can be,” he said. “I’m reassured that we are one of the safest global cities in the world, if not the safest global city in the world, but we always evolve and review ways to make sure that we remain as safe as we possibly can.”

In other words, “Keep calm and carry on.” If this were World War II, Trump might have accused Churchill of cowardice.

Except Churchill wasn’t a Muslim. There is no reason to give Trump the benefit of the doubt on this one. Remember the way he fired back at another Khan during the Democratic National Convention last year. When Khizr Khan, whose son died fighting for the United States in Iraq, criticized Trump’s policies and statements about Muslims, the then-candidate immediately played the religion card. Instead of defending his own policies or ignoring the remarks, Trump suggested that the dead soldier’s mother had not “been allowed” to speak at the convention, presumably for religious reasons. It was a chilling echo of a mindset that Jews find all too familiar, one that slots minorities, religious people and other “ethnics” into neat, defining categories. Muslim mom? Oppressed. A Muslim mayor? He must be soft on Islamist terror.

When Trump insists that we “must stop being politically correct,” he is defending this discredited worldview. Leaders from Paris to London to Washington, D.C. are aware that there is a radical Islam problem, and say so. The issue is not identifying the problem by name, but coming up with real-world solutions to a vicious offshoot of a vast religion. Critics of the travel ban aren’t pro-terrorism; in fact, many believe it is counterproductive precisely because it plays into ISIS’s notion of a world that hates Islam.

It has been tempting to dismiss Trump’s more Archie Bunkerish tendencies as a generational thing, just as we joked about those “Florida” emails as the work of retirees with too much time on their hands and too much Fox on their televisions. But a president has a responsibility to rise above petty prejudices and knee-jerk reactions and act — to use a by now tired word — presidential. That’s all the Jewish community was asking for during the spate of JCC bomb hoaxes and the weird Holocaust memorial contretemps, and what so many Americans are seeking in the face of the horrors in England, France and Portland, Oregon.

It’s not too much to ask for.