Some of James Comey’s best friends are Jewish (legal scholars) 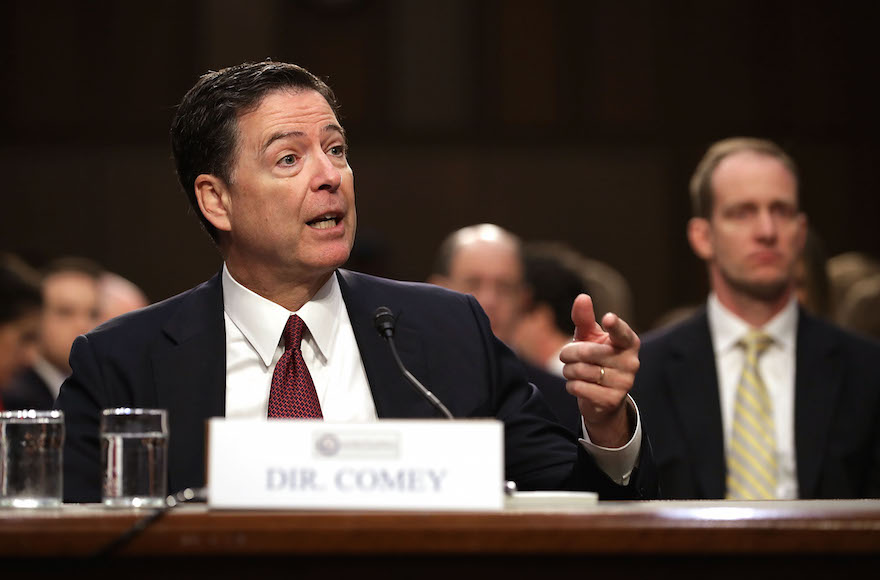 Comey was asked in a Senate testimony Thursday why he wrote memos immediately after each conversation he had with Trump, particularly about the FBI’s investigation into ties between the president’s campaign and Russia. He said: “I was honestly concerned he might lie about the nature of our meeting so I thought it important to document.”

We also know that in order to make the case that Trump is dishonest  — he surely anticipated making that case in some forum, although perhaps not as dramatically as he did before the Senate — he twice confided in friends who happened to be a) legal scholars and b) Jewish.

Comey, a longtime Washington insider, has proved expert at shaping the narrative surrounding the controversy, and never more so than when it comes to the investigation into ties between Trump’s first national security adviser, James Flynn, and the Russians. (Trump has said Comey’s handling of the investigation is one reason he fired Comey.)

It’s not just Comey’s dramatic opening statement, released Wednesday, that described awkward moments, such as when Trump appeared to be pressuring him to drop the investigation. The release drowned out what might have been a good news moment for Trump — nominating as Comey’s successor Christopher Wray, a former top Justice Department official respected across party lines.

Comey had left a careful paper trail, taking notes immediately following his meetings with Trump — and conveying concerns to his friends.

Trump’s private lawyer, Marc Kasowitz, was furious and called for an investigation in a press conference after Comey’s testimony was completed. “Today, Mr. Comey admitted that he leaked to friends of his purported memos of those privileged communications,” he said, although Trump said previously that he would not claim executive privilege when it comes to keeping his communications with Comey private.

Last month, a dramatic New York Times story that first revealed the lengths Comey took to keep Trump at a distance included on-the-record comment from Benjamin Wittes, the Senior Fellow in Governance Studies at the Brookings Institution. Wittes described a lunch he had with the former FBI director around the time Comey was most intensely feeling Trump’s pressure. Wittes says he did not speak to the Times at Comey’s behest, but Wittes’ description of the March 27 lunch made it clear that Comey had concerns about Trump in real time, and not just in the wake of his firing.

“He had to throw some brushback pitches to the administration,” Wittes told the Times, referring to Comey’s efforts to get Trump and his aides to stop making inappropriate requests.

Wittes, who is also the editor of the influential Lawfare blog, has said he and Comey are meet-now-and-then-for-lunch friends, but not close friends. He is married to Tamara Cofman Wittes, a senior Middle East scholar at Brookings. (In 2010, Wittes, discussing airport security, bemusedly recalled how his bad Jewish day school Hebrew got him an exemption from a security line at Ben Gurion airport.)

Comey revealed in his testimony Thursday that, in an another instance, he leaked information to a friend — post-firing — in order to push back against Trump’s intimations that Comey could be embarrassed should the content of their conversations be revealed. (Trump had tweeted that Comey had better hope there were no tapes of the conversations; on Thursday, Comey drew laughter when he said, “Lordy, I hope there are tapes.”) Comey delivered his friend his private notes of the meetings, taken immediately after one of his interactions. He explained why:

“My judgment was, I need to get [this memo] out into the public square,” he said. “I asked a friend of mine to share the content of the memo with a reporter.”

Asked who the friend was, he said: “A close friend who is a professor at Columbia law school.”

Twitter soon identified the friend as Daniel Richman. The Washington Post called Richman, who confirmed it, but would not add anything more.

JUST IN: Columbia U professor Dan Richman confirms to @washingtonpost he was the friend Comey asked to share info about his mtg w/ Trump.

Wittes has not said how he and Comey became friends, nor has Richman, although both men were federal prosecutors in New York around the same time.

What we do know is that Comey, an Irish Catholic born in New York and raised in New Jersey, was close to Jewish organizations throughout his FBI career, and said he is enormously affected by the lessons of the Holocaust.

The week he was fired, his final speech as FBI director was to the Anti-Defamation League.

“I believe the Holocaust is the most significant event in human history. And I mean significant in two different ways,” he said in that speech. “It is, of course, significant because it was the most horrific display of inhumanity — one that simply defies words and challenges meaning. How could such a thing happen? How is it consistent with the concept of a loving God?”

Then, he added how the Holocaust informed his deeply held beliefs about preventing the abuse of power.

“I also believe the Holocaust was the most significant event in history, not just because it was a display of inhumanity, but because it was also the most horrific display of our humanity — our true capacity for evil and for moral surrender,” he said. “And that second significance is the reason we require every new FBI special agent and intelligence analyst in training to visit the Holocaust Museum. We want them to learn about abuse of power on a breathtaking scale.”

Two other Jewish scholars, meanwhile, were duking it out at Twitter over whether what Comey was describing amounted to Trump obstructing justice.

Alan Dershowitz, the Harvard University constitutional law expert, has argued that Trump’s right as an executive to fire Comey (and other officials) meant that the firing could not be construed as obstruction:

You cannot have obstruction of justice when the president exercises his constitutional authority to fire the director of the FBI. https://t.co/PUPmb2gfdh

Norm Eisen, who had been ethics lawyer in the Obama administration, disagreed, saying that if Trump acted with “corrupt intent,” he could be liable:

Trump’s son, Donald Jr., was excited that Dershowitz was ostensibly defending his Dad (although Dershowitz has also consistently said he believes Trump has been unwise).

Interesting! When @AlanDersh (not exactly the alt right) is continually backing up @realDonaldTrump you know its over. #NothingBurger https://t.co/MUYbmk2VdR

Trump Jr., who has had his own brushes with the alt-right, likely is referring to Dershowitz’s reputation as a Jewish Democrat when he calls the scholar “not exactly the alt right.”