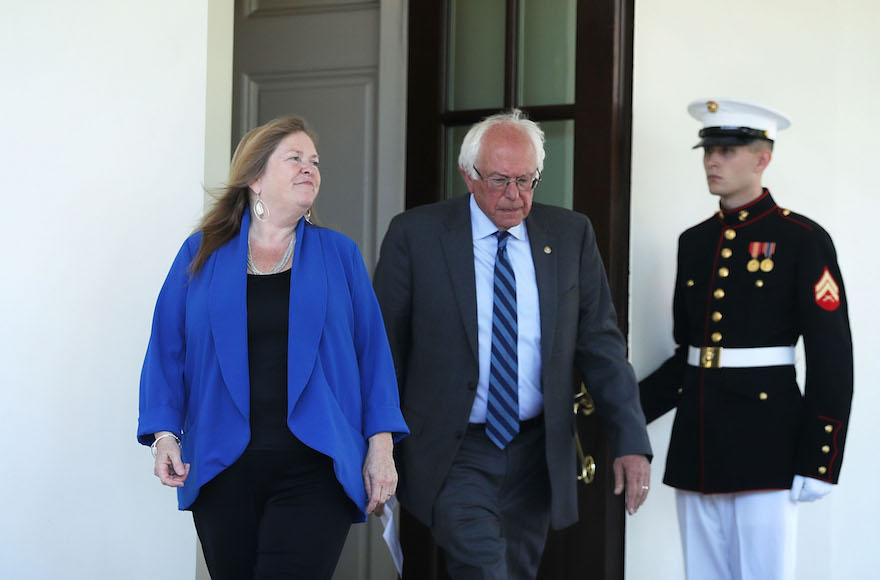 WASHINGTON (JTA) — Sen. Bernie Sanders and his wife, Jane, have hired attorneys in the FBI investigation of Jane Sanders’ alleged bank fraud sought originally by the Trump campaign in Vermont.

In 2010, Jane Sanders obtained a loan of $10 million to expand Burlington College while she was its president. According to Politico, Jane Sanders is being accused of having “falsified and inflated nearly $2 million that she’d claimed donors had pledged to repay the loans.”

In January 2016, the U.S. attorney for Vermont received a Request for an Investigation into Apparent Federal Bank Fraud from Brady Toensing, chairman for the Trump campaign in Vermont. The four-page letter included six exhibits and two documents detailing how Jane Sanders managed the purchase of 33 acres of land for the college.

Prosecutors are also speculating whether Bernie Sanders, I-Vt., used his political position to urge the People’s United Bank to approve the loan. Sanders himself is not under FBI investigation, according to the Washington Post.

The financial difficulties in trying to repay the loan forced the college’s closing in 2006.

Bernie Sanders has called the investigation “nonsense,” but the couple did bring in Rich Cassidy, a well-connected Burlington attorney and Sanders supporter, and Larry Robbins, a Washington-based defense attorney who has represented high-profile political clients such as I. Lewis “Scooter” Libby, to represent Jane Sanders in the matter, Politico reported.

Once the federal investigation is concluded, the Justice Department must decide whether or not to bring charges. Vermont currently has no U.S. attorney, as Trump demanded the resignation of most of the country’s federal prosecutors in March, saying it was necessary for a “uniform transition,” according to The New York Times. A replacement has not yet been nominated.

The allegations did not gain major traction as Sanders was gaining influence on the campaign trail. Sanders, the first Jewish candidate to win a U.S. presidential primary, lost to Hillary Clinton in his upset bid to gain the Democratic nomination. Clinton went on to lose to Donald Trump in November.

“This was a story that just, amazingly enough, came out in the middle of my presidential campaign, initiated by Donald Trump’s campaign manager in Vermont,” Bernie Sanders told the Washington Post on Saturday night between rallies in Pennsylvania and Ohio aimed at defeating the Republicans’ health care bill.