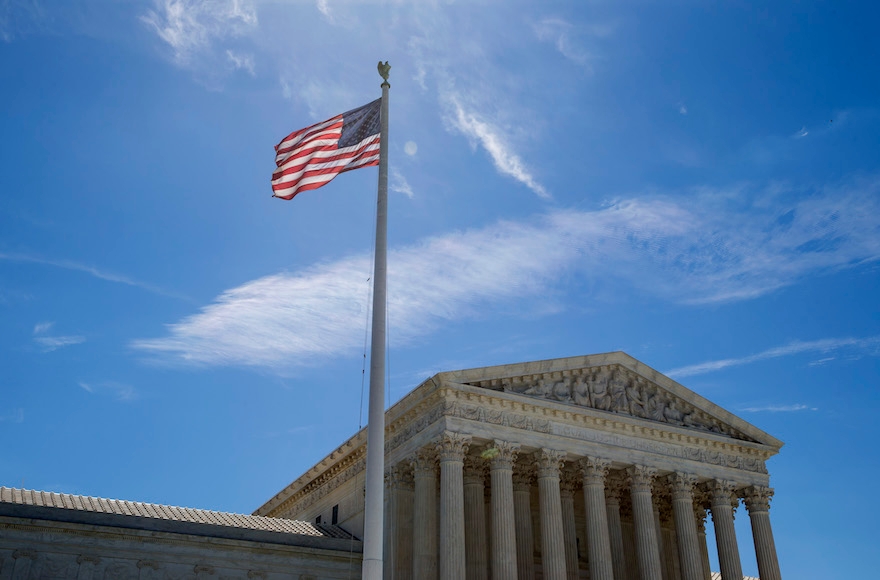 The U.S. Supreme Court after it was announced that it will allow a limited version of President Donald Trump's travel ban to take effect, in Washington, D.C., June 26, 2017. (Eric Thayer/Getty Images)
Advertisement

On Monday, the court said it would hear the appeals of two cases that had resulted from the travel ban, which aimed to keep  the citizens from six predominantly Muslim countries from entering the United States for 90 days and all refugees for 120 days.

The high court agreed to stay parts of rulings that had blocked the ban from being enforced. The partial stay means that foreigners with no U.S. ties could be prohibited from entering the country, but those with ties such as through business or personal relationship would remain unaffected, The New York Times reported. Those who had been to the country previously also could enter.

HIAS — formerly known as the Hebrew Immigrant Aid Society — is among the plaintiffs suing Trump in one of the cases the Supreme Court agreed to take on. It called the announcement “mixed news” in a statement, praising it for limiting some of the executive order’s reach but criticizing the court for partially allowing the executive order to be enforced.

“HIAS welcomes the ruling as an affirmation that the president does not have unfettered unchecked authority to bar refugees from the United States without evidence to justify such action,” said the group’s CEO and president, Mark Hetfield. “We also welcome the ruling as confirmation that there are limits to the president’s ability to bar non-citizens from the United States based on unsubstantiated presumptions relating only to their nation of birth.”

Hetfield criticized the fact that those without such ties could now be barred from entering the United States.

“We are very disappointed, however, that others will be arbitrarily excluded,” Hetfield said. “Certainly in the case of refugees, this order will have a tragic toll on those who have fled for their lives and played by our rules to find refuge in the United States.”

HIAS was founded in the 1880s as a resource for newly arrived Jewish immigrants.

The Anti-Defamation League, along with its criticism, also praised the court for limiting the scope of the order.

“We were pleased that the court appropriately recognized that there are limitations on the president’s authority when it comes to immigration generally,” its national director and CEO, Jonathan Greenblatt, said in a statement. “But the court’s failure to recognize the plight of the world’s most endangered refugees – those fleeing countries where their lives are in imminent danger – is profoundly disappointing,”

Bend the Arc: Jewish Action sharply criticized the stay that would allow parts of the ban to be enforced, calling it “a deeply harmful decision.”

“At a minimum, because of the court’s decision today, we will be betraying a fundamental American and Jewish value by turning away countless individuals who are seeking a better life in our nation, some of them fleeing life-threatening violence,” the group’s CEO, Stosh Cotler, said in a statement.