Israel is losing support among minorities and millennials, study finds 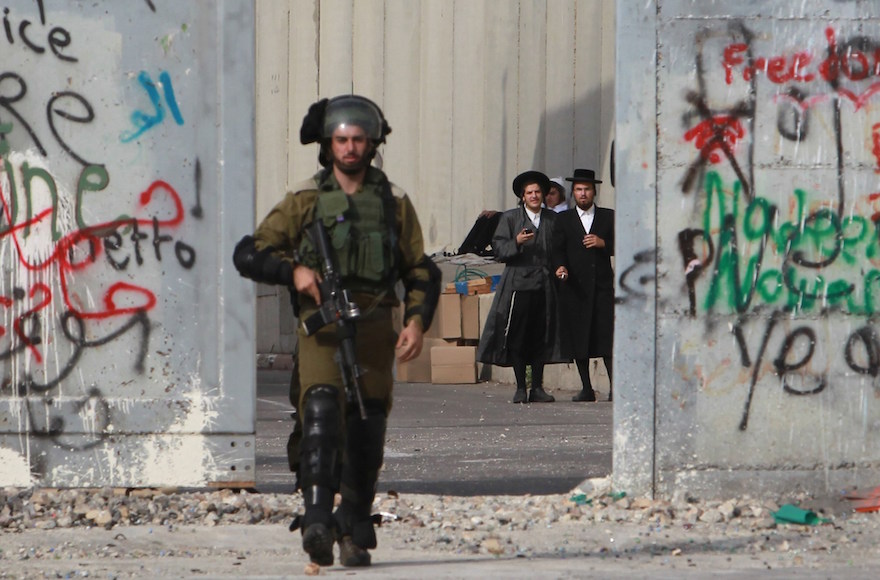 Ultra-Orthodox Jewish men standing behind a section of Israel's security fence as an Israeli soldier makes his way at the main entrance of the West Bank city of Bethlehem during clashes with Palestinian protesters, Oct. 12, 2015. (Musa al-Shaer/AFP/Getty Images)
Advertisement

If you’re like most Americans, you picture walls of concrete enclosing an austere and strict country. The men wear black hats, the women long skirts. Everyone looks pretty serious.

That’s what Brand Israel Group, a group of former advertising professionals who set out to sell Israel to Americans, found in a series of focus groups beginning in 2005. The group has since commissioned two surveys of the American public — in 2010 and 2016 — and didn’t like what it found.

According to the surveys, Israel has pretty broad backing among American citizens, but is losing support among a range of growing demographics. As pro-Israel advocates tout “shared values” between the United States and Israel, fewer and fewer Americans actually think they believe the same things as Israelis.

“Shared values are the bedrock of our relationship, and young Americans do not believe Israel shares our values,” said Fern Oppenheim, one of the group’s co-founders. “That’s a huge issue. We have to have a narrative about the heart and soul and humanity of the Israelis.”

The survey was conducted online last September and October by the polling firm Global Strategy Group, and sampled 2,600 Americans among a range of demographic groups.

Knowledge of Israel has gone up — but favorability is down.

More people say they know more about Israel now than they did in 2010. While only 23 percent of Americans said they knew at least a fair amount about Israel in 2010, the number rose to 37 percent in 2016. Knowledge of Israel grew among every demographic group except college students, where it fell precipitously — from 50 percent to just 34 percent, a number on par with the national average.

But it appears that the more Americans learn about Israel, the less they like it. In 2010, 76 percent of Americans viewed Israel favorably. In 2016, the number had fallen to 62 percent. Levels of support have dropped as well. In 2010, the study found that 22 percent of Americans were “core” supporters of Israel, which dropped to 15 percent by 2016.

Israel is losing out among a range of growing demographics, from Latinos to millennials.

The groups with relatively high levels of favorability toward Israel, according to the study, included men, Republicans and older Americans. The groups that like Israel less are the mirror image: women, Democrats and millennials, along with African-Americans and Latinos. And those population groups are all growing.

A majority of all these groups still sees Israel favorably, but the numbers are falling. Favorability among Democrats dropped 13 points, from 73 percent to 60 percent. Among women, it dropped from 74 percent to 57 percent.

Most college students hardly hear about Israel at all.

Colleges are hotbeds of anti-Israel fervor, right? Not so much. The study found declining results for Israel among college students, but a majority still view Israel favorably. Moreover, contrary to what some advocacy groups might shrei, most college students hardly encounter the Israel debate at all.

Still, Oppenheim noted a shifting picture among Jewish college kids. While 84 percent of Jewish college students leaned toward the Israeli side of the conflict in 2010, only 57 percent do now. Support for the Palestinian side, meanwhile, grew more than sixfold, from 2 percent to 13 percent.

Notably, nearly a third of Jewish college students said they experience anti-Semitism on campus. Of those, more than 40 percent said the anti-Semitism was not connected to Israel.

But what college students can agree on most regarding Israel is that they barely hear about it. More than three-quarters of college kids said Israel rarely or never comes up. On college campuses with an organized pro-Palestinian presence, the number drops only slightly, to 70 percent.

Israel has spent years and millions of dollars trying to portray itself as the place where Gal Gadot invented the cherry tomato on the beach using Waze. Or something.

Israel’s touting of its tech industry, warm climate and Mediterranean food may have worked a bit on Americans, who view Israel as innovative (78 percent) and cool (63 percent). But around three-quarters of Americans still see Israel as dominated by conflict. And though only 10 percent of Israeli Jews are haredi Orthodox, 73 percent of Americans view Israel as ultra-religious.

So while American Jewish leaders have protested this week that a small haredi minority dominates Israel, that minority, for many Americans, is the image of the Jewish state.