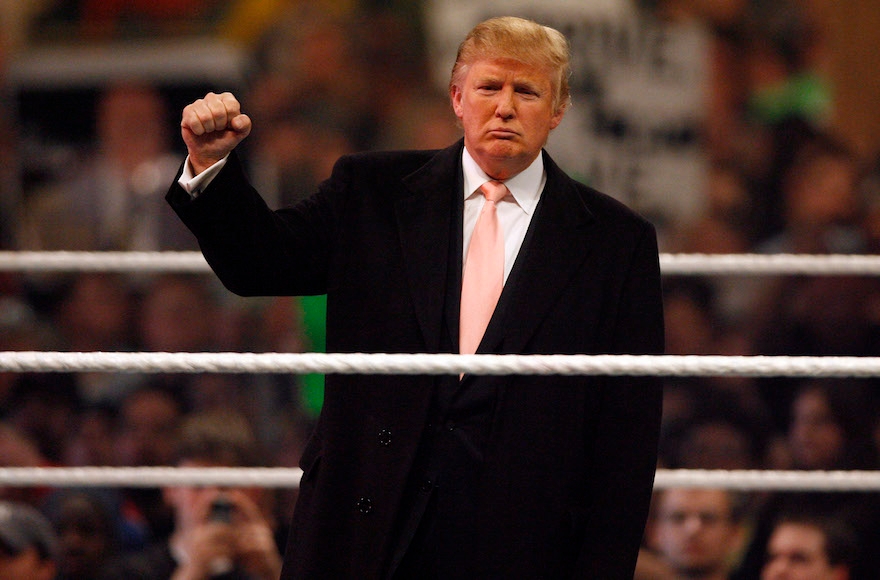 Donald Trump gets the crowd pumped up prior to the start of the WrestleMania 23 at Detroit's Ford Field, April 1, 2007. (Leon Halip/WireImage/Getty Images)
Advertisement

WASHINGTON (JTA) — The anonymous Reddit user who is claiming responsibility for the altered video depicting President Donald Trump body slamming someone with CNN superimposed over his head has a history of racism, anti-Semitism and incitement to violence, according to the Anti-Defamation League.

White House spokesman Sean Spicer said in a one-sentence email to a JTA request for a response to the ADL report on the gif, “The video did not come from Reddit.” He did not say where the video came from.

Trump tweeted the gif, or graphics interchange format — a short video that is friendly to multiple platforms — on Sunday. It was drawn from a staged encounter years ago between wrestling impresario Vince McMahon and Trump, who are friends.

The president has feuded with the media generally and CNN specifically in recent days. He has seized on CNN’s retracting of a report linking a Trump ally to a Senate investigation, calling the news network a purveyor of “garbage journalism.” He tagged the gif #FraudNewsCNN, and the official White House account, @POTUS, retweeted it.

Jared Yates Sexton, a political commentator who has criticized Trump, was the first on Sunday to trace the gif to a user of the Reddit social media platform and identified racist and anti-Semitic postings by the same user.

This is the guy who created the meme Trump tweeted out today. Trump's making him a celebrity in his online circles. pic.twitter.com/ZXd8TCIWDT

ADL in its analysis was more careful, stopping short of confirming that the Reddit user, who goes by the handle HanAssholeSolo, was behind the clip, saying instead that he “appears to have created the version of the edited clip tweeted by the president and posted it on a sub-Reddit commonly used by President Trump supporters.”

It noted that the Reddit user on Monday celebrated Trump’s use of the gif as a personal victory and that other Reddit users congratulated him or her.

ADL’s analysis tracked other memes — or internet themes — launched by the user, including a chart of CNN personalities with the purported Jews among them marked with stars of David and other intimations of Jewish media control.

In another post, the Reddit user, using the pejorative for African-Americans, said: “I just like dancing when n****** are getting beat down by the cops.” He or she also said that the liberal Jewish philanthropist George Soros’s “dead bloated corpse being dragged through the streets would be my satisfaction.”