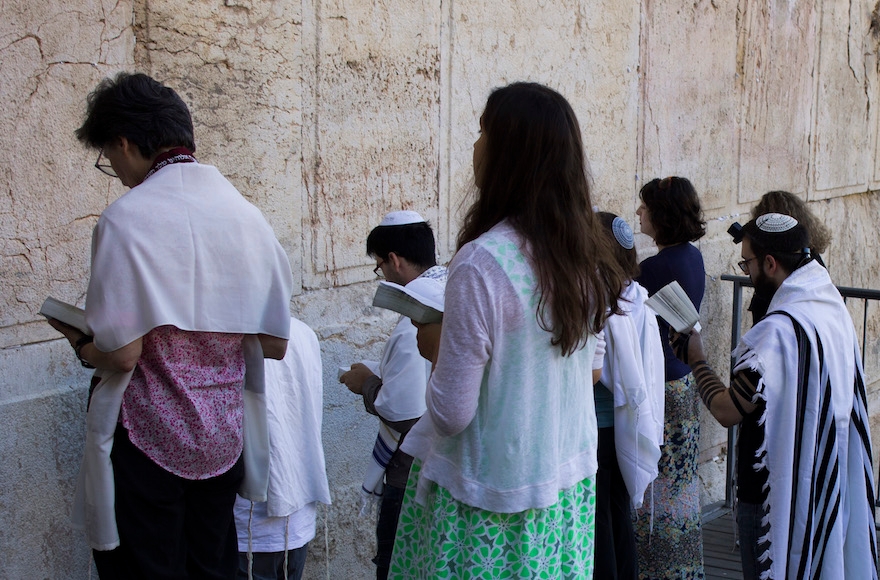 (JTA) — The Great Jewish Revolt of 2017. The Bar Kotel Rebellion. The Diaspora Strikes Back.

Whatever you call it, last week’s clash between American Jewish leaders and the Netanyahu government felt louder, angrier and more significant than previous clashes over pluralism in Israel.

That may be because it wasn’t only about pluralism.

That’s not to say that pluralism isn’t important. The non-Orthodox Jewish groups who fought hard for a space and a say at the Western Wall — only to see the agreement frozen — want their versions of Judaism to be treated with respect in Israel. They knew that granting more control over conversions to the haredi Orthodox Chief Rabbinate, as a controversial conversion bill would have done, would present another signal that Reform and Conservative leaders have no authority, or legitimacy, in Israel.

Reform and Conservative Jews will tell you how galling it is that Israel may be the only place in the Western world where the freedom of Jews to marry and worship as they wish is restricted by law. They find it baffling and hurtful that their religious identity — generations old and shared with a majority in the Diaspora — has at best only symbolic legal standing in the homeland of the Jewish people. (Consider what happened in May when boys and girls from Conservative day schools in New York and New Jersey tried to pray from a Torah scroll at a pair of kibbutzim far away from the fevered Western Wall: Local Orthodox authorities threatened to take away the kibbutz kitchens’ kosher certification if the egalitarian service went on as planned. The service was scrapped.)

And they find it more than insulting when Orthodox politicians in Israel denigrate liberal Judaism as worse than no religion at all when their own religious leaders have so little to say to, and so little positive influence on, the near majority of Israelis who are secular.

All this is enough to understand the anger of U.S. Jewish groups last week. But there is reason to believe there are other factors at play: politics, psychology and strategy.

Politics: This is the thanks we get?

Mainstream Jewish groups by and large are liberal when it comes to domestic issues: abortion, immigration, a solid social safety net. These liberal groups are seeing everywhere the consequences of their support for Israel. The exclusion of the Star of David flag from the Chicago Dyke March was a funhouse reflection of more mainstream erosion of support for Israel on the left. Israel may not be a pariah for most of the Democratic Party, but you are far more likely to find unquestioning support for Israel on the right. On a list of things Jewish groups share with other progressive groups, Israel stands out as a glaring exception — usually unfairly, but nevertheless.

As a result, leaders of the major groups feel they are doing the heavy lifting when it comes to supporting Israel — defending it not just to the Republicans and evangelicals whose support for Israel is unconditional, but fellow liberals who are either confused, indifferent or hostile. That task was hard enough when Israel was seen as a democratic darling of the West; it’s only gotten harder as Israel’s nationalist  government has proposed everything from trying to hobble left-wing NGOs to banning supporters of the BDS movement to attempting to enshrine Hebrew as the country’s only official language.

To then see Israeli officials ignore them or backtrack on an issue they care deeply about — pluralism — feels doubly ungrateful.

Psychology: Saying one thing, meaning another

Many of the biggest Jewish groups, and a majority of their constituents, are well to the left of the current Israeli government on the Palestinian issue. Poll after poll suggests that American Jews support a two-state solution to the conflict and are growing more wary of what they see as undemocratic tendencies in Israel. The younger they are, the more this wariness — and disconnection — grows.

But Jewish groups generally will not challenge Israel on what both sides have agreed to call security matters. American Jews do not vote in Israel and their children do not fight in its wars. Despite a diverse membership, the Conference of Presidents of Major American Jewish Organizations and AIPAC see their role as defending the sitting Israeli government.

Rabbis also tend to be more dovish than the current government, but often hesitate to say so from the pulpit. Peace issues are considered too “divisive,” too “political.” As a result, a third of American rabbis told a pollster in 2013 that they are “fearful” of expressing their views on Israel, and half said they had refrained from publicly voicing their views on Israel at least once in the previous three years.

Rabbis have fewer qualms expressing their views about pluralism, however. One can only guess how many sermons this past Shabbat were devoted to the Western Wall and conversion issues. Federations that would hesitate to invite a speaker from Peace Now or J Street often staff committees and fund projects devoted to fighting for the rights of Reform and Conservative Jews in Israel. And groups that are hesitant to wade into the Israeli-Palestinian debate let the rhetoric fly when it comes to pluralism.

Freud had a term for swapping unwanted impulses for socially approved expressions: sublimation. For the members of a largely liberal community, pluralism is not only a vital issue in its own right but a steam valve. It allows them to voice their independence from and occasional displeasure with the Israel government without second-guessing security decisions or — and this may be key — giving ammunition to Israel’s most hostile critics, who care about the Palestinian issue and not at all about the religious debate. Tired of holding their tongues, Jewish groups have found in pluralism a meaningful, focused subject through which they can help shape the Jewish state.

Strategy: What about the kids?

For the past few years American Jews have been preoccupied with the Boycott, Divestment and Sanctions movement against Israel, and attempts to delegitimize Israel in European capitals, in U.N. bodies and on college campuses. The antidote, say many Jewish organizations, is educating and empowering young, often indifferent Jews, and giving them the tools to counter negative perceptions about Israel. At the same time, there is a cottage industry of organizations worried that Diaspora Jews care less and less about Israel.

Now some are beginning to make the connection between the pluralism debate and the generational challenge. Benjamin Mann, the head of school of the Solomon Schechter School of Manhattan — one of the day schools denied the use of a Torah — put it this way: “If Schechter Manhattan students, and students like them throughout North America, are made to feel that their Jewish communities, their very religious identities are devalued and rejected in the Jewish state, they will not sustain positive connections with Israel.”

Or as Natan Sharansky, chairman of the Jewish Agency, said in his Western Wall statement: “Today’s decision signifies a retreat from that agreement and will make our work to bring Israel and the Jewish world closer together increasingly more difficult.”

I imagine AIPAC leaders said pretty much the same thing when they flew to Israel last week to warn Netanyahu about the consequences of the anger over the Kotel and conversion decisions. Even a number of U.S. lawmakers made it known that they disapproved of the freezing of the Kotel deal.

Mainstream defenders of Israel prefer that the pluralism debate and security issues stay on separate tracks. Advocating for pluralism is a sincere, vital and “safe” way to fight for North American Jewish values in Israel without plowing into the Palestinian question. The steam valve is a good thing for the Jewish community, keeping the Jewish mainstream from tearing itself up over the West Bank.

But the June Uprising may be a moment when Jewish impatience with Israel, and the tactics for defending her,  jumped from one track to another.