How Gaza’s electricity crisis could spell trouble for Israel 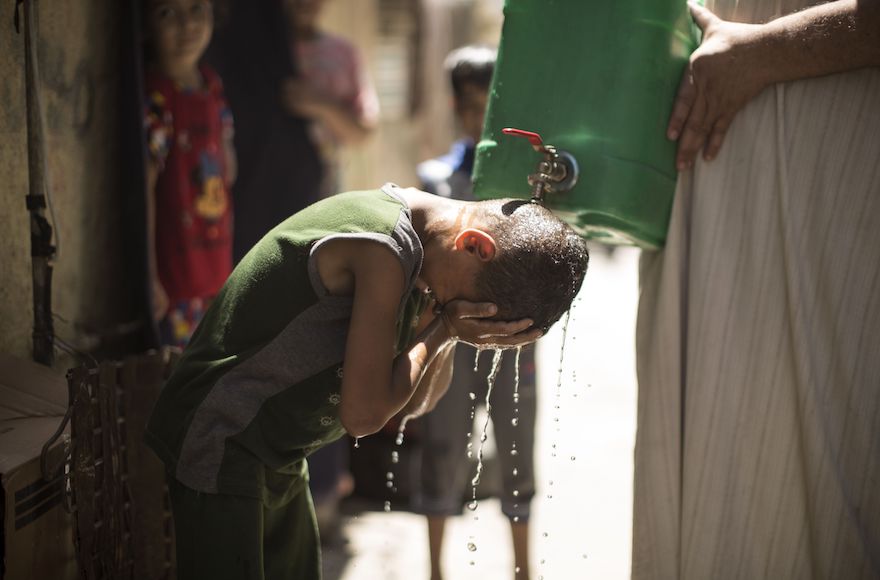 A Palestinian boy cooling off with water from a can during a heatwave at the al-Shati refugee camp in Gaza City, July 2, 2017. (AFP/Getty Images)
Advertisement

In response, Hamas has looked to Egypt for help — a development that could auger further division between Gaza and the West Bank and possibly greater bloodshed in the next Israel-Hamas war.

An immediate consequence of the electricity cuts has been suffering for Gazans. A new U.N. report said Gaza gets electricity just four to six hours a day, down from the recent normal flow of eight to 12 hours a day. Water is available at most homes for a few hours every three to five days with desalination plants operating at 15 percent of capacity. And 29 million gallons of sewage is flooding into the Mediterranean Sea every day and threatening to overflow into the streets.

In recent days, temperatures in the region have soared to over 98 degrees, with Israel reporting record-breaking demand for electricity on Sunday and Monday.

“The situation in Gaza has becoming increasingly precarious over recent months,” Robert Piper, the United Nations’ humanitarian coordinator for the Occupied Palestinian Territory, said in a plea to diplomats here Monday for $25.2 of emergency funding. “No one is untouched by the energy crisis.”

How did Gaza get here?

In 2007, Hamas violently seized control of the territory from Fatah, the political faction that dominates the Palestinian Authority government. In the decade since the coup, Israel — along with Egypt — has largely sealed off Gaza from land, air and sea.

According to Israel, the blockade is necessary to keep weapons and material out of the hands of Hamas, which has terrorized and warred with the Jewish state and vowed its destruction. Israel has allowed humanitarian goods to enter Gaza and permitted some Gazans to come for medical care.

Despite the rift, the Palestinian Authority has continued to pay for most of Gaza’s electricity, which Israel has suppled in exchange for a cut of the taxes it has collected on behalf of the West Bank government. Gaza’s sole power plant and, to a smaller extent, Egypt have supplied the rest.

The ongoing electricity crisis began in April, when the Gaza power plant shut down for lack of diesel fuel. Hamas refused to buy more fuel from the Palestinian Authority, complaining the taxes it charged were too high. In June, the Palestinian Authority announced it would reduce its payments to Israel for Gaza’s electricity by 40 percent. In response, Israel has gradually decreased the power supply to the territory — by 35 percent as of Sunday.

The Palestinian Authority has said its goal is to pressure Hamas to hand over control of Gaza. To that end, it has also since April slashed the salaries it has paid to tens of thousands of employees of the pre-Hamas government for not working and dramatically reduced medical aid to Gaza. On Tuesday, the Palestinian Authority fired more than 6,000 of those employees.

Rather than capitulating, Hamas has looked to Egypt for help. In late June, Cairo began supplying fuel for Gaza’s power plant — though not enough to compensate for the Israeli cuts. Hamas has also apparently been working toward forming a new government in Gaza with Mohammad Dahlan, a former Fatah strongman in Gaza with close ties to Egypt who helped broker the fuel shipments.

Making nice with Dahlan appeared to be an attempt by Hamas to win an opening of its Rafah border crossing with Egypt, which would give it a portal with the outside world and alleviate the humanitarian crisis. Neither Hamas nor the Palestinian Authority have been on good terms with Dahlan. Hamas chased him out of Gaza in 2007, and Palestinian Authority President Mahmoud Abbas exiled him from the Palestinian territories in 2011, deeming him a political threat.

Israeli Prime Minister Benjamin Netanyahu and Defense Minister Avigdor Liberman have said the electricity cuts are an internal Palestinian issue and Israel would restore full power were someone to foot the bill. But some officials have questioned whether Gaza’s suffering is in Israel’s interest.

Energy Minister Yuval Steinitz, a close associate of the prime minister, last month said it was “unacceptable” for Abbas to dictate Israeli policy. And last week, municipal and regional leaders in Israel rejected the announcement of a government-planned pipeline that would require them to treat the sewage that has flowed into their communities from waterways in northern Gaza.

“Israel’s interest is to allocate electricity to Gaza for civilian causes,” Alon Schuster, the head of the Shaar Hanegev Regional Council, told JTA. “I believe our policy should be to give the Palestinians what they need, and not to torture them in any case.”

Hamas’ political maneuvering could also have security implications. An alliance with Abbas’ political nemesis might well widen the rift between Hamas and Fatah. Further, if history is any guide, Hamas would make use of any increase in the flow of people and goods through Rafah to bolster its military capabilities. That would make another war with Israel all the more devastating.