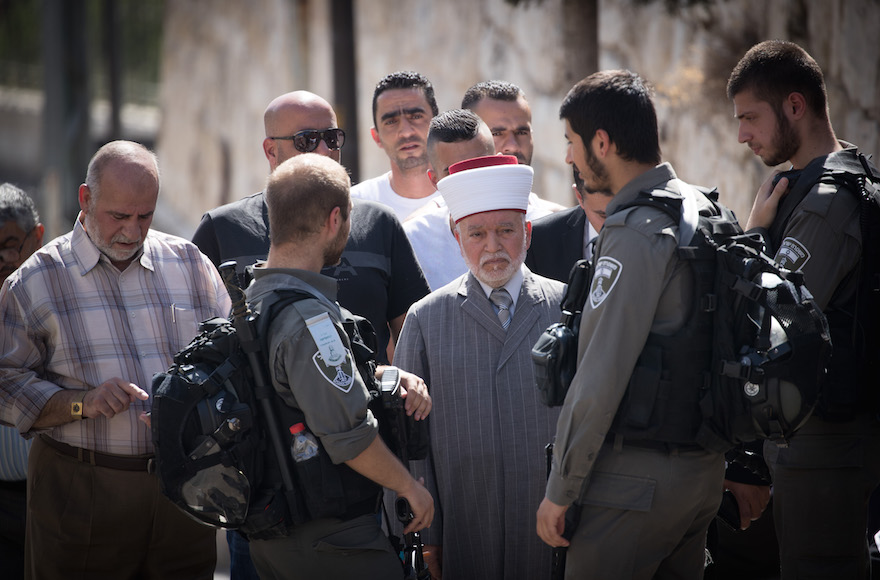 The mufti of Jerusalem, Muhammad Ahmad Hussein, near the scene of a shooting near the Temple Mount complex in Jerusalem’s Old City, July 14, 2017. (Yonatan Sindel/Flash90)
Advertisement

The grand mufti of the city, Mohammed Hussein, was detained for questioning Friday at a police station in the Old City, his son, Omar, told The Associated Press.

According to the news site NRG, the mufti was called in to answer questions over his call to worshippers after the attack to ignore a temporary ban on prayer and public gathering at the Temple Mount compound and the Haram al Sharif mosque. Police closed the area after two Israeli police officers were killed there and another was wounded, allegedly by three Arab-Israeli men of Palestinian heritage whom security forces killed at the scene of the attack.

Hussein called the closure “an escalation and aggression against al-Aqsa,” the Arab-language name of the compound.

In the aftermath of the attack, the U.S. Consulate General in Jerusalem instructed government employees and their family members not to enter the Old City of Jerusalem, without prior approval, until 8 a.m. Saturday.

Private U.S. citizens should “take into consideration these restrictions and the additional guidance contained in the Department of State’s travel warning for Israel, Jerusalem and the West Bank when making decisions regarding their travel in the Old City and in Jerusalem,” the statement also read.

The American ambassador to Israel, David Friedman, wrote on Twitter about the attack: “Shocked and horrified by the despicable attack.” He added: “Terrorism must be condemned by all and defeated. We pray for the victims.”

Mahmoud Abbas, the president of the Palestinian Authority, condemned the attack in a telephone conversation he initiated with Israeli Prime Minister Benjamin Netanyahu.

The Anti-Defamation League praised Abbas for acting “appropriately,” but blamed the attack on Palestinian incitement under his watch.

“For decades, there has been unceasing incitement against Israel, rife with false allegations about policies and actions in Jerusalem and on the Temple Mount, from Palestinian and Israeli Arab religious and political leaders,” Jonathan Greenblatt, the ADL’s CEO, and Carole Nuriel, the director of its Israel office, wrote in a joint statement.

They said Abbas and other “Arab political and religious leaders must now take concrete action to curb anti-Israel incitement.”