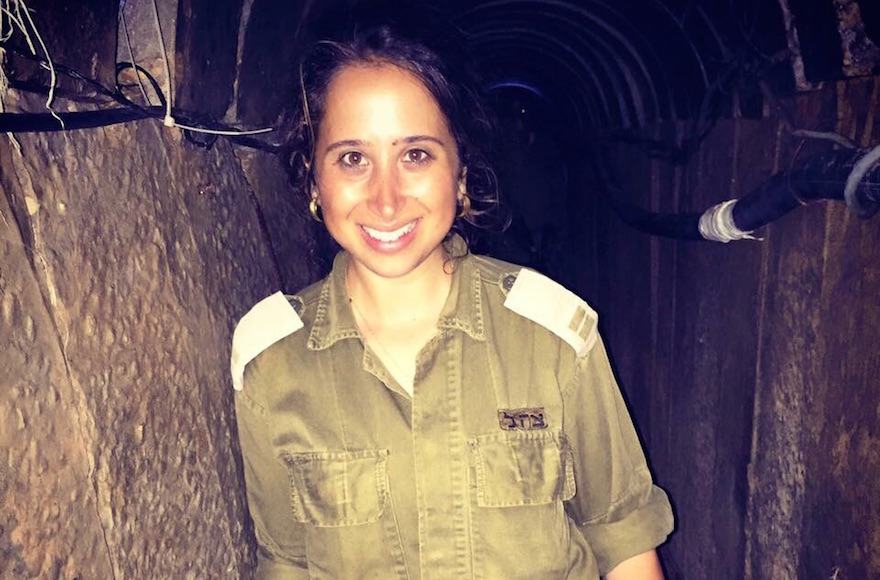 TEL AVIV – Capt. Libby Weiss spent most of the summer of 2014 in a Hamas tunnel, and she wouldn’t have wanted to be anywhere else.

Israel’s military captured the tunnel, which extended from Gaza into Israel near Kibbutz Ein Hashlosha, during Operation Protective Edge against Hamas in Gaza. As a spokesperson for the Israel Defense Forces, Weiss was tasked with showing the tunnel to journalists, and she was the first to bring foreign reporters into the claustrophobic space.

“It was really chilling to be inside there,” Weiss said. “There were empty potato chip bags and water bottles strewn about on the ground. It made you realize just how close the enemy was.”

For the past six years, Weiss has been on call 24/7 for journalists from all over the world. Reporters turn to her when they want to film Israeli soldiers in action or need a quick comment from the DF on breaking news.

On Aug. 17, Weiss finally will be turning off her army-issued phone. At 29, she is stepping down from her post and retiring from the military.

Weiss is not your typical Israeli soldier. Born in the United States and raised in Portland, Oregon, she moved to Israel in her early 20s and enlisted in the army soon afterward. She didn’t have to join up — at the ripe old age of 23, Weiss could have skipped military service – but the thought of foregoing army service didn’t even occur to her.

“There was never any doubt in my mind that I wanted to serve,” Weiss said. “I saw it as the basic responsibility of anyone who is a citizen, and it was also a way from me to adopt my Israeli identity.”

She has worked in the IDF Spokesperson’s Unit for practically her whole military career. Since March, Weiss has headed the international social media department, overseeing a team of 14 enlisted soldiers and one junior officer who produces viral content in English, Spanish and French. Their mission: tell the story of Israel’s army, and promote a positive image of an army that is often condemned by critics overseas.

Working in a nondescript building in central Tel Aviv, the soldiers sit hunched over a bank of computers editing video footage shot in the field and uploading posts to the IDF blog and the army’s Facebook, Twitter, Instagram and Snapchat accounts. Most of the soldiers in the division are immigrants — from North America, South America and France.

Weiss got her start in the unit’s foreign press branch, doing media tracking and crisis management. Though she initially signed on for only a year and a half of service, she was soon hooked.

“I was fascinated by the work and understood its importance from Day 1,” she said. “I didn’t have to think twice about staying on and taking leadership roles.”

Soon she was named head of the North American media department, where she spent four years. She quickly worked her way up to the rank of captain.

With her phone constantly ringing, no day was ever routine. Weiss always kept her field uniform and safety equipment at the ready in her car.

Sometimes her work took her overseas. After the 2013 Philippines typhoon and the 2015 Nepal earthquake, Weiss deployed with the IDF disaster relief delegations to those countries.

“Every time disaster struck across the world, Libby was my clear choice for deployment because I could count on her completely,” said former IDF spokesman Lt. Col. Peter Lerner, Weiss’ boss and mentor for much of her time in the army.

On assignment abroad, Weiss witnessed some horrific sights — and some miracles. In Nepal, she saw a teenage boy trapped for many days under rubble pulled out alive and brought for treatment at the IDF field hospital.

“He survived on a bottle of ghee, or clarified butter, that happened to be in an air pocket with him,” Weiss recalled. 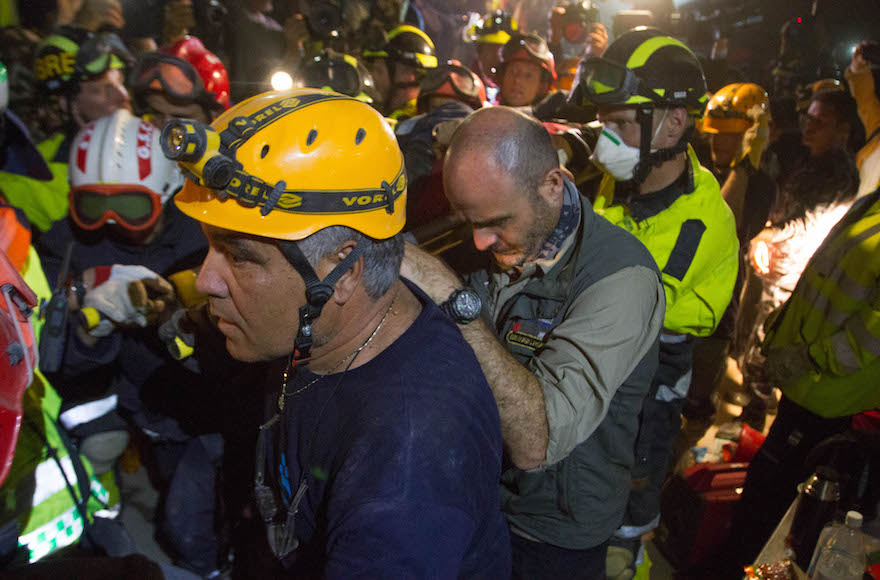 In the Philippines, Weiss was present for the birth of the first baby born in the IDF field hospital there. His parents named him Israel.

“I became quite friendly with the family, and we are still in touch,” she said.

Of all her army experiences, Israel’s war with Hamas in 2014 was the most challenging and demanding. Suddenly, Weiss found herself dealing with hundreds of journalists a day rather than with dozens. She did on-camera interviews 10, 20, sometimes 30 times a day. Often they were interrupted by air-raid sirens that sent Weiss and the reporters jumping into ditches to take cover from incoming rockets.

Weiss said the war tested her ability to separate the personal from the professional.

“When you are an Israeli citizen and there is a war, you feel involved. It’s here in your backyard. Then add to that being in a military uniform,” she said.

“You are exposed and you know about troop movements and military plans before they are carried out, and you find out details that are life changing for people, like when a soldier is killed. It warrants an emotional response on all levels, but as a professional you can’t have that.”

Growing up as the youngest daughter of Israeli-born parents in Oregon, Weiss never imagined she’d become an IDF officer. And she didn’t know she would live in Israel.

“I don’t know if I ever saw myself, at least back as a teenager, immigrating to Israel,” Weiss said. “But we definitely felt connected to Israel. It was part of our identity. I attended a Jewish day school and my parents spoke to us in Hebrew at home. We saw ourselves as Israeli Americans, and we were certainly Zionists.”

After graduating from Northwestern University in 2010 with a degree in political science, Weiss spent a year participating in the Israel Government Fellows, a selective MASA Israel program run by the Menachem Begin Heritage Center in Jerusalem.

Midway through the year, Weiss decided to make Israel her permanent home, and officially made aliyah once the program ended. Because she was an Israeli citizen from birth due to her parents, all she needed to do to immigrate was go to the Interior Ministry, show her Israeli passport and receive an Israeli identity card.

“Here I was making the biggest decision I had made thus far, and maybe the biggest I will ever make, and it took me 15 minutes and was the least painful bureaucratic process I had experienced in Israel,” Weiss recalled.

Nevertheless, Weiss feels she missed out on the powerful emotional experience that most North American immigrants get by taking an aliyah flight organized by Nefesh B’Nefesh alongside dozens of other new immigrants with a one-way ticket to the Jewish state.

“I think I would have enjoyed the significance of deplaning and having the community that welcomes you the minute you touch Israeli soil,” she said. “That underscores and reinforces what a big decision it is, that you are now joining — or rejoining — the Israeli people.”

Nefesh B’Nefesh honored Weiss last month with its 2017 Bonei Zion Young Leadership Award. She also received numerous other awards during her military career, including the prestigious Presidential Award of Excellence in 2014.

Weiss’ parents and older siblings all still live in the United States. They say they are proud of Weiss.

“Once Libby moved to Israel, it didn’t really surprise us that much that she joined the military,” said her brother, Gil, a Chicago physician. “She had a strong sense of wanting to do what was required of her peers and to carry out that responsibility.”

Now that she’s leaving the military, Weiss plans to take some time off and then go into business. She completed the Kellogg-Recanati International Executive MBA program at Tel Aviv University while in the military.

As she begins this next life chapter, Weiss says she has no regrets – either about her time in the army or her decision to move to Israel.

“I see myself as both American and Israeli, and I am appreciative of both countries,” she said.