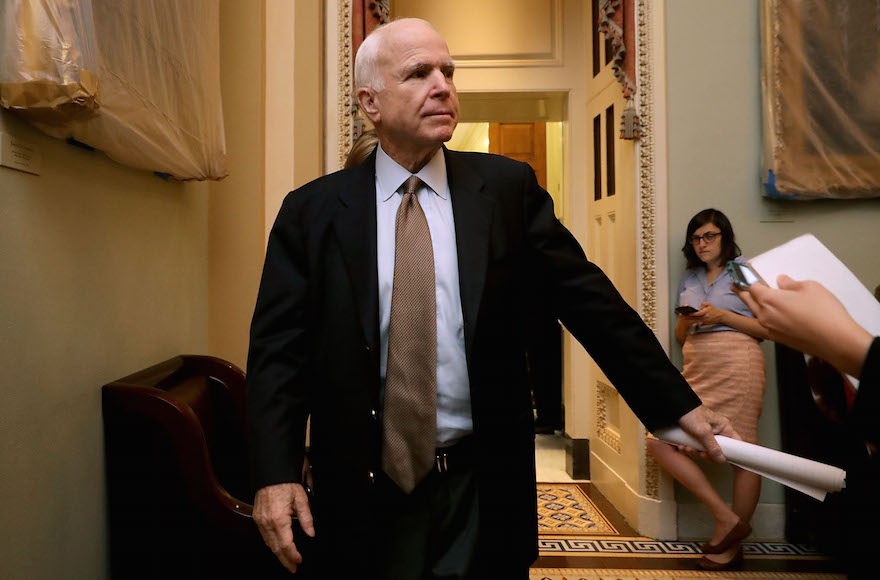 WASHINGTON (JTA) — Sen. John McCain, R-Ariz. — war hero, presidential candidate, force of nature — has brain cancer, his family said Wednesday night, and he is garnering well-wishes from across the spectrum.

More than a few are from Jews: Israeli Prime Minister Benjamin Netanyahu called McCain “A hero. A fighter. A friend.”

Godspeed, @SenJohnMcCain. A hero. A fighter. A friend. Israel is with you.

Norm Eisen, the ethics chief under President Barack Obama who has emerged as one of President Donald Trump’s fiercest critics, has worked in the past with McCain on lobbying reform. “Sending you ammo John: our prayers.”

Have been privileged to fight side by side w/ @SenJohnMcCain &so I am confident he will win this battle2. Sending you ammo John: our prayers

Some of the most heartfelt wishes came from McCain’s colleagues on the other side of the Senate aisle, a rare display of comity in a polarized Washington, including from Minority Leader Chuck Schumer of New York, and from Al Franken of Minnesota:

.@SenJohnMcCain, you are a true fighter & I'll be praying for you until you beat this. I know you will.

My friend and colleague @SenJohnMcCain has had his spirit tested time and time again. Wishing strength for him, his family, and loved ones.

There was even a nod from actor Jason Alexander, the politically active alum of “Seinfeld”:

@SenJohnMcCain prayers and best wishes to you, a fine American and man of principles.

McCain, a maverick who has stubbornly resisted shifting political tides and who embraces an interventionist foreign policy rooted in an idea of America as a shining example to the world, has a natural affinity for Jews. He has been an ardent defender of Israel, visiting the country countless times, and joined pro-Israel centrists in leading opposition to the 2015 Iran nuclear deal. His 2008 campaign for the presidency was chockablock with Jewish advisers, particularly in the national security sphere.

Here are four times he has joined with Jews in bucking expectations:

McCain-Feingold, or approving the message

McCain joined with Sen. Russ Feingold of Wisconsin, then one of the most liberal Democrats, to keep corporate money out of campaign financing. Republicans hated the law — its first legal challenge was by Sen. Mitch McConnell of Kentucky who is now the majority leader — and it eventually backfired. Banned from directly funding candidates, corporations exploited a loophole that allowed funding against candidates — and such so-called “soft money” was even harder to track. The Supreme Court in 2010 struck down key portions of McCain-Feingold as unconstitutionally impinging on free speech.

McCain-Feingold was so bogged down in acrimony and infighting, the cartoon series “Family Guy” made it a joke in 2010, featuring the bill as a laugh line that only irredeemably boring Washington insiders would get. It has one notable legacy: The “I’m Jane Doe and I approve this message” lines that tag political ads, designed to curb vituperation among candidates.

Quixotic? Yes. But the conservative, blue-talking southwestern Episcopalian and the soft-spoken Jew from Wisconsin remain friends, and Feingold was among McCain’s well-wishers on Wednesday.

I join so many others in sending @JohnMcCain and @cindymccain and their whole family my continued admiration and support.

McCain’s two closest friends in the Senate have been Lindsey Graham, Republican of South Carolina and Joe Lieberman, Democrat and then Independent of Connecticut. They advanced the robust foreign policy now out of fashion with Republicans with frequent visits to conflict zones, dubbing themselves the “Three Amigos.”

That “then Independent” in Lieberman’s biography is key. Lieberman and McCain were always close — like McCain, Lieberman remained a champion of the Iraq War long after other erstwhile backers changed their minds. But Lieberman’s defeat in the 2006 Democratic primary for his seat and his subsequent win as an Independent freed him to openly back McCain in the 2008 election, although he continued to caucus with Democrats.

McCain sorely wanted Lieberman as his running mate, but the Republican establishment — in the form of Karl Rove — fiercely resisted, saying he would be guaranteed to lose the election if he took on a Democrat in all but name. (So much for that: McCain’s eventual pick, Alaska Gov. Sarah Palin, pleased the base, but also likely was critical in driving away moderates and handing the election to Barack Obama.)

Lieberman had already made history in 2000 as the first Jewish candidate on a national ticket when Democratic nominee Al Gore chose him as his running mate. Had McCain prevailed, he would have made history again, as the first vice-presidential nominee to make the ticket for both parties.

McCain bucked the George W. Bush presidency in objecting to its sanction of torture in the wake of the Sept. 11 attacks. (He also has clashed with President Donald Trump on the issue.) It was personal for McCain: As a prisoner of war in Vietnam, he had been tortured, and the notion that his beloved country would embrace the practice struck him as unconscionable.

Among his partners in his quest to ban the practice? Rabbis for Human Rights (now T’ruah), which met with him in 2005. It wasn’t a mere courtesy meeting: The group briefed McCain on Israel’s Supreme Court 1999 ban on even “moderate physical pressure,” and the fact that Israel was able to combat terrorism without torture became a talking point for the senator.

Going kosher because, why not

McCain, speaking at an Israeli embassy event in 2012 honoring Lieberman, who was wrapping up his career as a senator, shocked the room by saying he was considering converting to Judaism. Not because he loved the faith’s practices, but because he had endured enough of them traveling with Lieberman, an Orthodox Jew, that he figured he might as well.

He was joking, of course, but it was a memorable — and salty — evening, as our coverage described it atthe time:

“I’ve had for so many years had to put up with the bulls**t,” McCain said. “I might as well convert.”

He started with Shabbat elevators, whose point he never quite got: “Pushing all those buttons — and nothing!”

Then McCain got to the dining. “Why in every f**king kosher menu do we have to have salmon?” he said to peals of laughter. “I’d like to have a round of applause tonight because we don’t have salmon.” (The main dish was roast beef.)

Then there were the long walks on winter Sabbaths, accompanying Lieberman home from the Senate. And that time McCain fell asleep on a plane ride. “I hear this mumbling and I look and there’s this guy wearing a shawl — I thought maybe I’d died.”

McCain now knows what a tallit is and even cited two “Hebrew” words in his lexicon, “Mensch and Oy Vey.”

But Lieberman, in his own speech, got in a zinger of a rejoinder: “John, your entry into the covenant was a lot less painful than mine.”