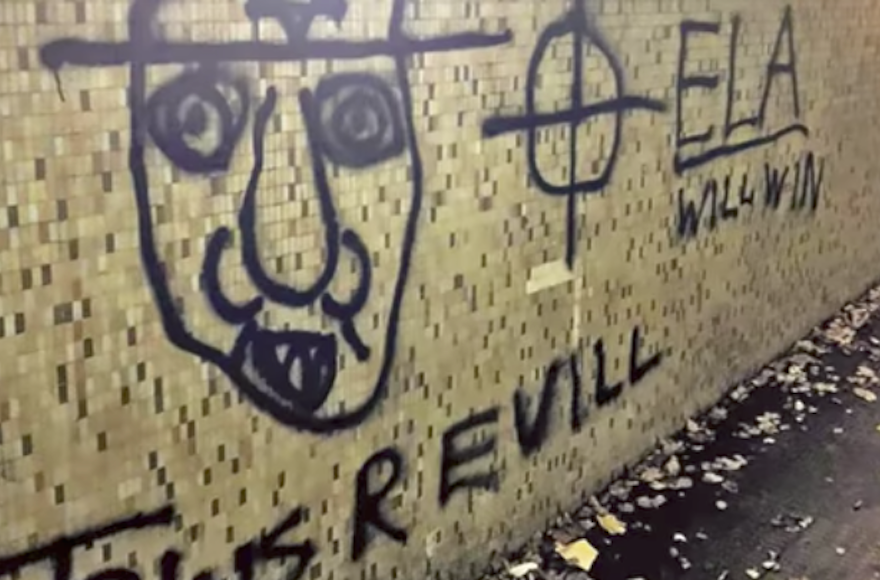 Graffiti found in the Sussex county of England last November.(Screenshot from YouTube)
Advertisement

(JTA) — The Jewish community of the United Kingdom recorded 767 anti-Semitic attacks in the first half of 2017 — the highest figure recorded within six months since monitoring began in 1984.

CST has recorded 80 violent assaults in 2017, a 78 percent rise from the 45 over the first six months of 2016 and the highest number CST has ever recorded for the January to July period.

In one incident, unidentified individuals threw a brick with the word “Jew” and a swastika painted on it into the home of a Jewish family in the London borough of Edgware on Shabbat. No one was hurt in the incident.

Nearly half of the incidents recorded by CST in 2017, or 351 cases, involved verbal abuse directed at individual Jews. CST usually publishes an annual report of incidents, partly based and conducted in consultation with police and Home Office officials, who also monitor hate crimes. But CST said it decided to publish a six-month report this year because of the unusual volume of incidents.

The increase in recorded attacks overall in Britain owed partly to a dramatic rise in documented incidents in the Manchester area — 84 percent, to 145 cases from 79 in 2016. As a comparison, the number of attacks in London rose by 10 percent, to 425 incidents from 387.

CST Chief Executive David Delew said that while “some of this may be down to improved reporting,” it is “sadly clear that the overall situation has deteriorated. Anti-Semitism is having an increasing impact on the lives of British Jews, and the hatred and anger that lies behind it is spreading.”

Jonathan Arkush, the president of the Board of Deputies of British Jews, said in a statement that the data in CST’s latest report “will be of deep concern to all Jews, particularly as there have been no specific events to provoke the upsurge.”

The United Kingdom is largely a safe place for Jews, he said but “the government, police and other authorities must read the warning signals and take whatever action is needed to secure the continued safety of the Jewish community.”