A Jewish professor taught at a Catholic school in a Muslim country. Here’s what happened. 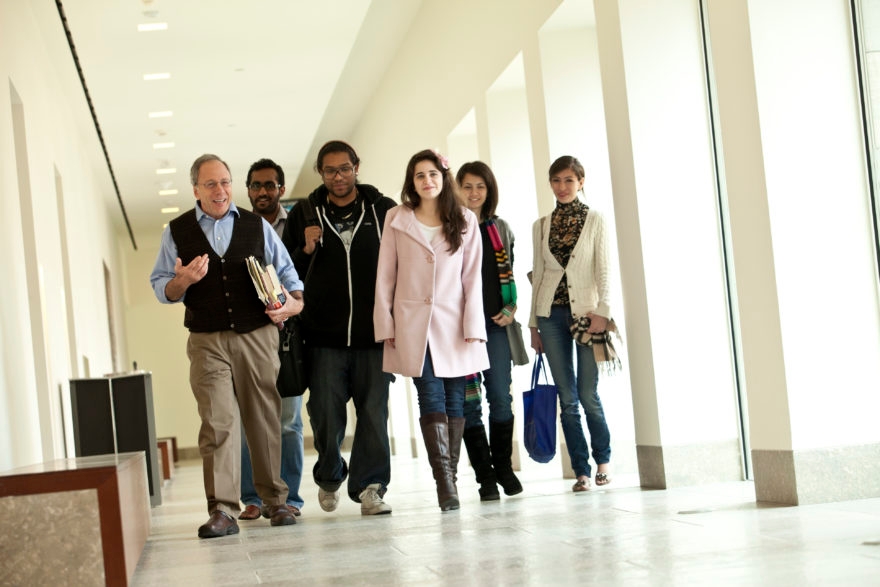 Gary Wasserman (left) strolls through a corridor on Georgetown's campus in Qatar with his students in 2012. (Georgetown University-Qatar)
Advertisement

WASHINGTON (JTA) — Near the end of his first year teaching American studies at the Georgetown University campus in Qatar, Gary Wasserman introduced a dozen Israelis to a dozen undergraduates from across the Middle East.

Then he left the room so the students could have an unfiltered discussion.

The one-hour meeting was part of what Wasserman calls his “liberal quest” to overcome biases — grounded, he said, in part by his Jewish upbringing.

But the encounter wasn’t exactly a success. Afterward, a Lebanese student came to his room, tears in her eyes. An Israeli had asked her during the encounter, “You hate us, don’t you?”

Wasserman in his forthcoming book “The Doha Experiment,” about his gig directing the Georgetown American studies program in Qatar from 2006 to 2014, uses the incident to identify a duality that was typical of his time on campus: the quest for connections outside of one’s comfort zone, on the one hand, combined with intense fears of people raised in radically different cultures.

“We were part of a university that provided a place to think and talk,” Wasserman said he told the Lebanese student, who had been trapped at her aunt’s house during the 2006 Lebanon War. “And while this didn’t seem like much now, it was really all we had to offer. I felt inadequate and sad.”

Wasserman’s initial mission — shared by Georgetown and the Qatari government — was to bring an American-style free exchange of thought to the deeply traditionalist Gulf state.

But that expectation soon tamped down into a more limited one: that young people get a decent education and get along with folks from vastly different political cultures.

“There’s a liberal, missionary impulse that you are bringing pluralism, globalization and tolerance to a part of the world that needs it,” Wasserman, who is now retired, told JTA this week.

Within months, Wasserman wrote, his original idealism had abated — but then, so had his own fears about being a Jew in Qatar.

About the apprehension: Wasserman, the author of a popular political science textbook who had taught at Columbia and Georgetown, appalled friends and family when he decided to go to Qatar. With the memory of the 9/11 terrorist attacks still fresh, many in his circle questioned the rationality of a Jew moving to what seemed like the belly of the beast at the time.

Their pleadings had an effect, and he consulted with a psychologist who happened to be a European Jew about how to deal with his anxieties. His sessions had a surprising denouement.

“You’re not crazy to be scared,” Wasserman quoted the psychologist as saying in their final session. “You’re crazy to go. Haven’t you been watching the news? These people hate Jews. They’re anti-Semites. I’ve dealt with these f’kakta Nazis all my life. Stay away from them. They’ll never change.”

“This went on for a while,” Wasserman wrote. “(He was being paid by the hour.)”

Nonetheless, in Qatar, Wasserman encountered barely any personal animosity because of his Jewishness. In one poignant passage, he described his concerns after his identity became common knowledge on campus — a staffer had let it slip.

“It was too easy to imagine their unspoken responses: ‘Y’know, he’s Jewish.’ ‘Yeah, I could tell.’ Or, ‘So that’s what those horns are.’ Or, ‘No wonder he flunked me,'” Wasserman wrote. “I might have overthought this. One student later said to me, after she had graduated, that the only student discussion she recalls about my religion was the worry that I might feel isolated and out of place.”

Instead, the hostility toward Jews — and Israel — was expressed in more generalized settings, particularly the conspiracy theories that proliferate in Arab countries.

Wasserman said his favorite anecdote in the book is the student who told him that another teacher had said that “the Mossad was behind 9/11, and also that 9/11 was not a bad idea.”

He asked the student how both ideas could coexist in one person’s head. The student “looked at me for a moment, resigned that yet another naïve foreigner failed to appreciate how holding two contradictory opinions at the same time was consistent with the political views permeating the region,” Wasserman wrote.

Another student, Ella, graduated at the top of the class. Shortly after, Wasserman saw an interview with Ella in a local newspaper in which she was asked for her impressions of the 2012 U.S. election. Her “depressing” answer, as he put it: “It really didn’t matter because the Zionists controlled the banks, the media, and both political parties and wouldn’t let anything change in America.”

Perhaps Wasserman’s most foolhardy quest was to teach the students about how the pro-Israel lobby functioned as a curative to the overly expansive description of its influence in the 2007 book by John Mearsheimer and Stephen Walt, “The Israel Lobby.” (Disclosure: This reporter and Wasserman collaborated for a period in the late 2000s on a book on the pro-Israel lobby. It found no buyers.)

“In my lecture, I tried to leave the class with a simple point: the power of the pro-Israel lobby had been inflated by supporters and opponents alike for their own reasons,” he wrote. “Although clearly a powerful player in foreign policy, AIPAC was only narrowly influential and constrained by other public and political interests.”

Did the students get the message? Not quite. Later in the book, Wasserman related that he often found that the students bought into myths of Jewish influence — but with admiration, not contempt.

Wasserman, alongside other faculty on campus, came to accept that they were not the vanguard of progressive values in Qatar. Instead, they set more modest ambitions, such as one-to-one opportunities to lend a hand to those seeking a way out of a society that was stifling, especially to women.

He wrote about a student wearing an abaya — the robe-like dress worn by some women in parts of the Muslim world — entering his office and asking him to write a letter recommending her for graduate studies in England. He was happy to — she had good grades — but she could not articulate what exactly she wanted to study, making it a challenge for him to tailor the letter to specifics that would help her.

“I don’t really want to go to graduate school,” she told him, “but if I stay in Doha, my family will make me get married. Going to London for grad school is acceptable to them. For me, it means I can put off getting married and not have to confront my parents.”

It was encounters like these that left Wasserman hopeful about bridging divides, he told JTA.

“The problem is you don’t want encounters conducted on the basis of Jew and Muslim, Christian and Buddhist, because it isolates one identity and sets up a polarity,” he said.

Bring Israelis over for a semester, not just an afternoon, he said, so they would have the time to find other commonalities with their Arab and Muslim counterparts.

“They will share things like a harsh father or questions about devotion or career goals,” he said.