Was a Jewish summer camp PC in raising a Palestinian flag — or in lowering it?

NEW YORK (JTA) — I don’t know if there is a Yiddish or Hebrew version of “more Catholic than the pope.” More machmir than the rebbe? More kosher than glatt?

If there is such an expression, this weekend’s convulsion over a Jewish camp in Washington state raising a Palestinian flag deserves it. The angry reactions, and the camp’s apology for having raised the flag next to the Israeli flag, suggests oddly that American Jews are stricter than Israel and the United States when it comes to granting the Palestinians a national identity.

Camp Solomon Schechter sent a note to parents over the weekend, explaining that it had flown the Palestinian flag as a sign of “friendship and acceptance” for the Muslim and Christian children, some from Jerusalem, who were visiting the camp as part of Kids 4 Peace, a coexistence group. They also hoped it would help develop “empathy” among campers and staff.

The reaction was swift and negative, and the camp backtracked, explaining that all the flags on display — American, Canadian, Israeli and Palestinian — would come down before Shabbat “to relieve the sadness and anger that some feel by the site [sic] of the flag.”

Critics demanded to know why a Jewish camp would want, as one put it on Facebook, to instill “empathy” for “terrorists who want to stab Jews and destroy the State of Israel.” An Israel-based columnist wrote, “When a Jewish day camp in America flies the Palestinian flag as Palestinians are killing Israelis, you know that PC in the US has gone off the cliff.”

Even Israel, however, doesn’t hold Palestinians to such a standard. 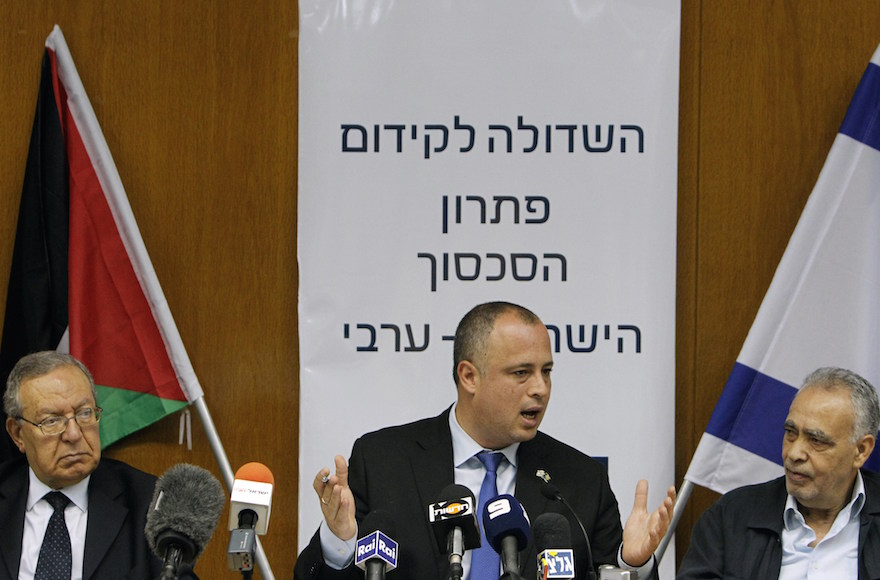 Granted, Israel blows hot and cold on this issue depending on the state of its relations with the Palestinian Authority, and currently they are at a low point. But the Israelis’ willingness to display the flag suggests they view it not as an anti-Israel or terrorist symbol, but the colors of a political entity with which they must and do cooperate at various levels — militarily, diplomatically, economically.

The White House also flew the Palestinian flag when Abbas met there with President Donald Trump — again, not an endorsement of Palestinian statehood or the Palestinians’ anti-Israel policies, but a recognition that Palestinian peoplehood is an actual thing, the Palestinian Authority is just that and the flag is a symbol of both.

Some of the objections on the camp’s Facebook page, which has been taken down, said it wasn’t the place of a Jewish camp to acknowledge Palestinian peoplehood or engage in “dialogue” — as if these principles hadn’t been established in Israel. However, you can revile many of the positions taken by the P.A., and be disgusted by the uses to which many Palestinians and their supporters put the flag, but it’s an anachronism — at least since Oslo — to say that Zionism means a rejection of the very notion of a Palestinian people and a Palestinian government. Israel recognizes the Palestinian Authority, however strained their relationship. The governments in Jerusalem and Ramallah are barely talking at the moment — publicly anyway — but that recognition hasn’t been suspended.

As one Facebook commenter noted, “Honoring Palestinian children and their identity and loving Israel and being Zionists are not mutually exclusive.”

What seemed to have sparked the anger and the backlash was the sense that flying the flag was indeed “honoring” the Palestinian cause — a cause that has been co-opted for too long by leaders who encourage violence, followers who carry it out  and enablers who reject the very idea of Israel as a Jewish state. As a Seattle woman told the blogger who first reported the story, “the time to raise the Palestinian flag over our summer camps is when they stop burning the Israeli flag at theirs.”

But there is another way to look at it: The Muslim kids who were willing to dialogue with the Jewish Israeli and American kids represent the kinds of partners Israel wishes it had. After all, they were coming to a Jewish summer camp, one that flies the Israeli flag and calls itself “unabashedly pro-Israel,” and bringing with them a message about the possibilities for peace. If those kids don’t deserve a little honor for their participation, what does it say about the Jewish community’s willingness to be part of a solution?

Tu quoque, or “the shoe’s on the other foot,” arguments only go so far, but imagine how the Jewish community would have responded had a Christian or Muslim camp invited Jewish or Israeli kids and refused to hoist the Israeli flag. Except you don’t have to imagine it. Last month, Jews were justifiably and almost unanimously outraged when the Chicago Dyke March banned three Jewish women who waved a rainbow flag bearing the Star of David. They explained that the women were welcome to join their progressive cause, but the march was officially “anti-Zionist” and the message of the flag might upset marchers who identify the star with Israel.

I hesitate to compare the two incidents, but in both cases, ideological voices insisted that a national symbol shouldn’t be seen because the people and political reality it represented are offensive, undeserving and antagonizing.