Jared Kushner on Israeli-Palestinian peace: ‘There may be no solution’ 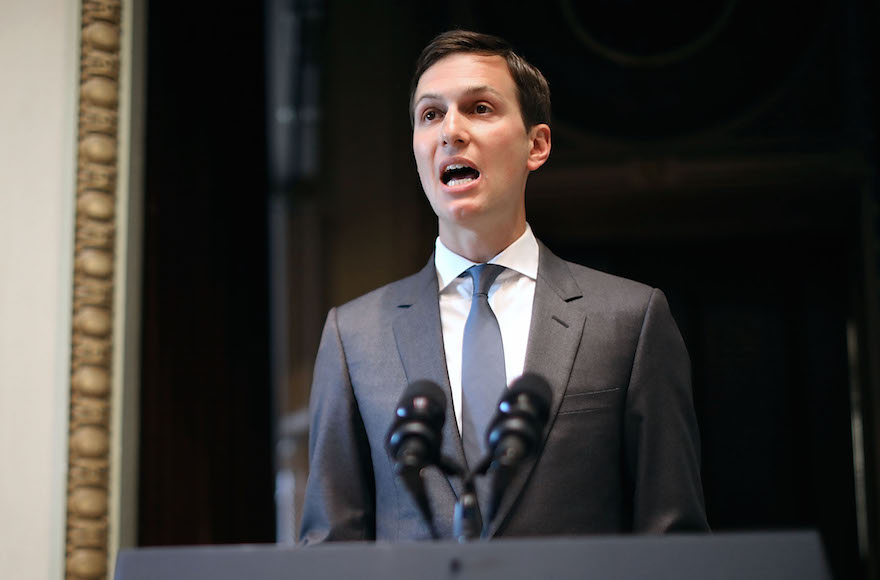 NEW YORK (JTA) — If Jared Kushner is the only person who can deliver Middle East peace — as his father-in-law Donald Trump said — he comes off as a reluctant savior.

In a speech delivered Monday to a group of congressional interns and leaked to the media, Kushner expounded on the Trump administration’s efforts to achieve Israeli-Palestinian peace. What emerged was an outlook that at once was resolutely pro-Israel and skeptical of the chances of success.

“So what do we offer that’s unique? I don’t know,” Kushner said in his seven-minute answer to an intern’s question in a recording obtained by Wired magazine. “And we’re trying to work with the parties very quietly to see if there’s a solution. And there may be no solution, but it’s one of the problem sets that the president asked us to focus on.”

Kushner traveled to the region in June along with President Trump’s chief negotiator, Jason Greenblatt, to meet with Israeli and Palestinian stakeholders and suss out the chances of reaching a peace deal. It’s among a bevy of issues that Kushner has taken on as a senior adviser to his father-in-law — including criminal justice reform, streamlining the federal government, stemming the opioid addiction crisis and more.

In the speech, Kushner sounds unenthused to be handling the peace process. He opens his answer by saying “this is one of the ones I was asked to take on,” and becomes more pessimistic from there, criticizing Israeli and Palestinian leaders for being mired in history and unable to let go of minor provocations.

He also made some questionable claims. Kushner said that “not a whole lot has been accomplished over the last 40 or 50 years we’ve been doing this,” apparently dismissing Israeli peace pacts with Egypt and Jordan, the Israeli-Palestinian Oslo Accords and Israel’s withdrawal from Gaza. Then he said “the variables haven’t been changed much” — something that both Israeli and Palestinian officials would fiercely dispute. Israelis charge that their withdrawals from territory have been met only with terror and incitement, while the Palestinians claim growing Israeli settlements are making a Palestinian state near impossible.

Aaron David Miller, who worked on the peace process in Republican and Democratic administrations, said he appreciated Kushner’s skepticism while adding that his dismissal of history is misguided.

“If you want to have any chance of doing anything on this issue, you have to see the world the way it is, not just the way you want it to be,” Miller told JTA, adding later, “You do need a history lesson, big time, because if you don’t know where you’ve been, you don’t have a chance of figuring out where you’re going.”

Kushner did boast how the Trump administration mediated an agreement to provide Palestinians with an increase of 32 million cubic meters of fresh water. He also praised his team for helping resolve the recent Temple Mount crisis that erupted when three Arab-Israeli gunmen killed two Israeli police officers, and escalated when Israel set up metal detectors at the holy site revered by the Muslims as the Noble Sanctuary.

In describing recent events, Kushner displayed a pro-Israel stance — unsurprising given that he was raised in pro-Israel Jewish day schools and Israeli Prime Minister Benjamin Netanyahu once slept in his childhood bed. Palestinian officials have criticized Kushner for siding with Netanyahu during his June meeting with Palestinian Authority President Mahmoud Abbas.

Kushner did not speak of the two-state solution in his answer. He defended Israel’s decision to erect metal detectors as “not an irrational thing to do,” although Palestinians decried the move and said the security measures made them feel like suspects at their own holy site. He criticized a Palestinian imam for forbidding worshippers from passing through the metal detectors.

And in recounting fatalities during the weekend of violence that followed the detectors’ placement, Kushner listed only the Israelis — including three members of an Israeli family stabbed to death in their home by a Palestinian terrorist — and did not mention the Palestinians.

Miller said that while Kushner is clearly pro-Israel, he is not the first American negotiator who is partial to Israel’s interests due to longtime associations with the country.

“It’s clear that emotionally, by virtue of his background and his association with Israel and the prime minister, there’s a high degree of sensitivity” toward Israel, Miller said. “That’s hardly new in the wonderful world of peacemaking. You could have said that about any number of individuals who participated in this process over the past 20 years.”

Israeli-Palestinian peace efforts have been largely stalled for well over a decade. Four years ago, then-Secretary of State John Kerry poured his energy into starting negotiations that ultimately went nowhere. The same goes for negotiators under the George W. Bush and Clinton administrations, including Bill Clinton himself. The Oslo Accords, however, were signed during his presidency.

The difference is that those negotiators all at least sounded optimistic as they were beginning their quests. Kushner, at least in this would-be private briefing, sounded at times like he was already close to giving up hope.

“You have some people who don’t want to see and achieve an outcome of peace,” he said. “And other people sometimes thrive in the chaos … And that’s not new to politics, and it’s not new to that conflict. It’s just the way it is.”