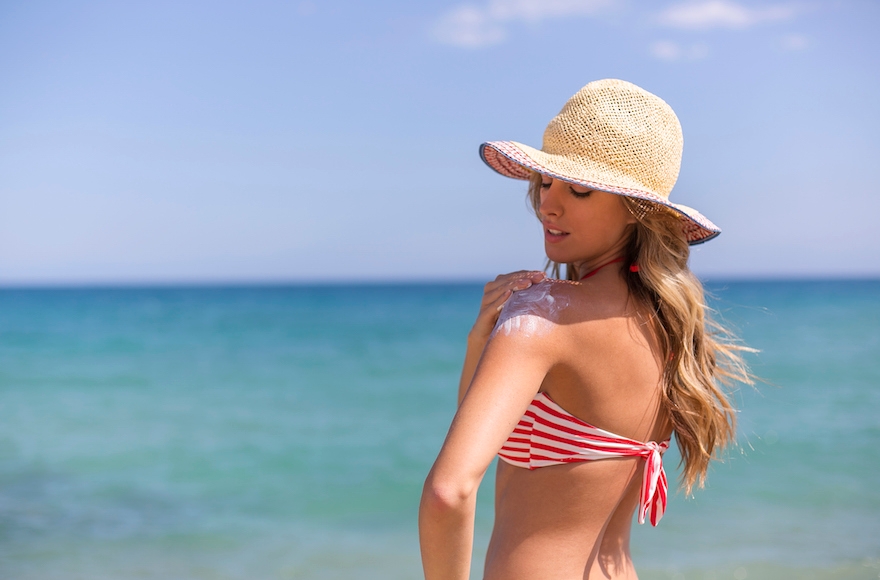 Despite all the public awareness about the dangers of sun exposure, the number of people being diagnosed with melanoma, the deadliest form of skin cancer, has skyrocketed over the past three decades. Jews are at higher risk than most. (DESEO/Getty Images)
Advertisement

JERUSALEM — The dog days of summer have arrived, and by now we all know the drill: Cover up, slather on the sunscreen or go back inside.

With all the public awareness about the dangers of sun exposure, you’d think that skin cancer rates would be falling.

In fact, the number of people being diagnosed with melanoma, the deadliest form of skin cancer, has skyrocketed over the past three decades. And Jews are at higher risk than most.

It seems we just can’t kick our sun worshipping. Maybe that’s because, as studies have shown, sun exposure can trigger the release of those pleasant-feeling endorphins, and tanning can be addictive.

The statistics about skin cancer should be sobering. Most melanomas (and some 90 percent of non-melanoma skin cancers) are associated with exposure to the sun’s dangerous ultraviolet rays. Each year there are more new cases of skin cancer than all the new diagnoses of breast, lung and colon cancer combined. One in every five Americans will develop skin cancer over the course of their lifetime, according to the Skin Cancer Foundation.

The news is worse for Jews. Those who have a mutation in the BRCA2 gene — raising the risk of developing breast, ovarian, prostate and pancreatic cancers — also are at increased risk of skin cancer.

That’s because the proteins produced from the BRCA1 and BRCA2 genes are involved in repairing damaged DNA, which helps keep cells from growing and dividing too fast, and mutations in these genes hinder DNA repair, allowing potentially damaging mutations to persist. As these defects accumulate, they can trigger cells to grow and divide uncontrollably and form cancerous tumors.

While about one in 400 people in the general population carries the BRCA mutations, among Jews the rate is one in 40 – making Jews 10 times more likely to develop a BRCA mutation-related cancer.

Melanoma, while accounting for less than 1 percent of all skin cancer cases, is responsible for the majority of skin cancer deaths – approximately 10,000 Americans every year. A person’s risk for melanoma doubles if they have had more than five sunburns, according to a 2001 study. Although those with fair skin or a family history of skin cancer due to gene mutations are at the highest risk for melanoma, anyone — including those with dark skin — can develop it.

For patients whose melanoma is detected early on, the five-year survival rate is about 98 percent. But the survival rate falls precipitously if the disease has reached the lymph nodes (62 percent of patients after five years) or metastasizes and spreads to other organs (18 percent), according to the American Cancer Society.

Here’s the good news: Skin cancer patients have greater reason for hope thanks to cutting-edge melanoma research being conducted in Israel and the United States.

Just 10 years ago, Israel had one of the highest melanoma rates worldwide. But then came better education about the dangers of sun exposure and an effort to test thousands of women for BRCA mutations and alert them if they have heightened risk for the disease. That effort, funded in part by the Israel Cancer Research Fund, has helped bring Israel’s melanoma rate down to 18th in the world.

Dr. Harriet Kluger, a medical oncologist and researcher at Yale University, says the first line of defense against getting skin cancer is reducing the amount of skin exposed to the sun. In addition, she says, everyone should visit a dermatologist at least once a year to ensure that any suspicious skin growths are evaluated promptly.

On the research side, Israeli researched Dr. Gabi Gerlitz of Ariel University is investigating the inner workings of melanoma cells that migrate – metastasize — in the hopes of figuring out how to block this process.

When patients have cancer, 90 percent of them die from the cancerous cells’ migration to vital organs, not from the primary tumor, Gerlitz notes. The question is, how do the cells migrate?

Gerlitz and his team began by studying the DNA in the nuclei of migrating melanoma cells. They found that the DNA contracts when the cell starts to migrate, as if it were packing up tightly for a trip.

“When we look at moving cells, we see fibers called cytoskeleton that help the cells migrate as well as to move and to reshape their nuclei,” Gerlitz said. “We were the first to study this process. Later, others saw it happening in leukemia, colon and breast cancer cells, suggesting it’s quite a general phenomenon.”

Once Gerlitz saw how the DNA contracts in order to migrate between other cells, he began to study how and when this contraction affects the gene. His research is being backed by the Israel Cancer Research Fund, which raises money in North America for cancer research across different Israeli institutions.

“Once we understand fully what exactly is changing in the migrating cells, we can identify targets for treating cancer patients,” he said. “If we know that a specific gene is important for migration, we can try to interfere with it.” 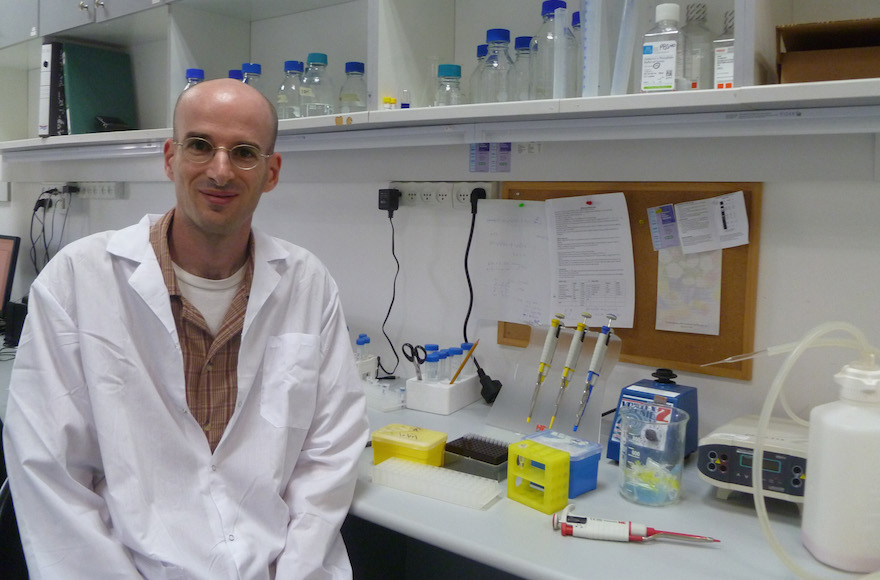 Dr. Gabi Gerlitz of Ariel University is studying the inner workings of melanoma cells that metastasize in the hope of one day blocking this process in melanoma and other cancers. (Courtesy of Gerlitz)

At Israel’s Bar-Ilan University, Dr. Cyrille Cohen, head of the tumor immunology and immunotherapy lab, is using an ICRF research grant to focus on cancer immunotherapy: how to stimulate and improve the body’s immune system to prevent or treat cancer.

“The basic principle behind this field is that our immune system is able to recognize and kill cancer cells under certain circumstances,” Cohen explained. “We believe this happens all the time but that sometimes, due to external pressure – for example what we eat or what we’re exposed to, like sun or smoke – more cancer cells arise in the body. They acquire the means to tackle our natural defenses and the immune system fails to take care of them.”

Cohen’s laboratory specializes in studying and genetically engineering the cancer response of T-cells — cells crucial to eradicating viruses and coordinating broad immune reactions. His team has developed ways to tweak the response of those cells to make them stronger when they are exposed to cancer cells.

This approach offers a personalized approach to fighting cancer. Using a handful of patients from a National Institutes of Health clinical trial, Cohen’s team used gene sequencing to identify the number and types of mutations in each of the patients’ cancers. Then, using a computer algorithm, they predicted which mutations would be targeted by T-cells, and they generated synthetic molecules that mimicked the mutations on the melanoma cells.

After researchers singled out the T-cells specific to those patients’ mutations, scientists found that those T-cells were able to fight the tumors when injected back into the patients. Now Cohen’s research is aimed at improving the T-cell prediction process and better understanding the requirements for an efficient immune response against cancer.

Israel is known for its medical innovation, but funding is hard to come by, says Jill O’Donnell-Tormey, CEO of the Cancer Research Institute.

“CRI has always funded outstanding science globally. Partnering with ICRF helps ensure that we can couple CRI’s immunological expertise with ICRF’s longstanding relationships with Israeli institutions,” she said. “We hope our collaboration will attract the best scientific minds in Israel to focus on immunotherapy research.”

Any successful research carried out in Israel, O’Donnell-Tormey says, “will ultimately impact the lives of cancer patients worldwide.”