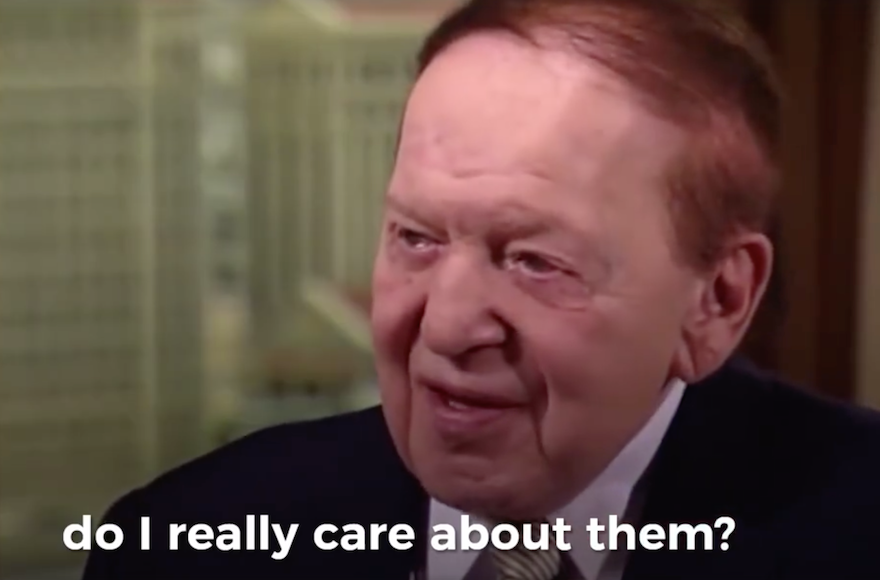 (JTA) — Bernie Sanders may hope to be seen as the true face of the Democratic Party, but he doesn’t have to get there by playing fast and loose with the truth.

With Hillary Clinton out of the way, the Independent from Vermont is still in the Senate and pushing the grassroots fundraising offshoot from his presidential campaign, “Our Revolution.” It’s almost as if Sanders didn’t lose the primary fight against Clinton last year.

“Bernie Sanders’ campaign isn’t over,” a story this week in the New Yorker says. It describes his forays deep into a country won by President Donald Trump. Rallies in Kentucky and West Virginia suggest that Sanders, 75, is making clear he can play well where Clinton did not. Might the first Jewish candidate to win major presidential primaries become the first Jewish president after all?

He may, but his message — at least in a video this week targeting Sheldon Adelson — turns out to be fact challenged.

Sanders is campaigning, as ever, on income inequality. On Sunday, he launched on his Facebook page what appears to be the first in a series of videos, “The Faces of Greed.” From its title sequence, it looks like Sanders will take aim at the super-wealthy and how they shape our politics. Trump features most prominently, but space is reserved for other right-wing millionaires, some on the outside as donors (the Koch brothers), and others in Trump’s Cabinet (Education Secretary Betsy DeVos, Commerce Secretary Wilbur Ross, Treasury Secretary Steven Mnuchin and economic adviser Gary Cohn).

The first target is Adelson, the casino magnate, Republican donor and one of the richest men in the world. The video outlines how Adelson has profited from Republican-backed tax plans.

“So what is Sheldon Adelson going to do with all that money?” the video asks. “It doesn’t sound like he’s going to use it to help other people.”

That’s followed by a clip of Adelson saying: “A friend of mine says that he only cares about the faces he can see. So you when you think ahead, do you think in three generations from now, my children’s children’s’ children, I don’t even know who they are?”

It finishes by wondering whether Trump’s tax breaks would be better spent on medical coverage for children in Nevada than on a newspaper Adelson purchased to ratchet up his influence in Nevada or on a private jet.

To anyone who has covered Adelson, the clip is jarring because of what it leaves out: Adelson has said clearly and consistently that he is politically involved primarily because he is pro-Israel. Adelson benefits from tax breaks to be sure, and his purchase of the Las Vegas Review Journal appeared to be in part a reaction to the paper’s previous muckraking coverage of his casino business. But he is quite self-conscious about the obligations that his vast wealth confers upon him, and talks up his giving quite frequently, not just to Israel, but to medical research. (His wife, Miriam, is a physician.)

So I searched for the quote above that suggests a businessman so callous that he doesn’t consider the legacy he’ll leave to descendants. I traced it to a lengthy and rare interview Adelson gave to Bloomberg TV in 2015, when the last election cycle was just getting underway.

In its full context, Adelson is explaining that he enjoys his wealth because of the good he can do. The interviewer, Betty Liu, asks him what he’s learned along the way to being one of the world’s richest men.

“I’ve learned to seek advice from other people and get more than my own viewpoint on something,” Adelson said. “I’ve learned that now that I’ve accumulated incredible amounts of money, I could do some good for humanity. I don’t necessarily want to build a dynasty because a friend of mine says that he only cares about the faces he can see. So you when you think ahead, do you think in three generations from now, my children’s children’s’ children, do I really care about them, I don’t even know who they are? They don’t exist!”

Contra the claim in Sanders’ clip, Adelson is saying he is indeed “going to use it [his wealth] to help other people.” His point was that it would be immoral to keep it strictly within the family.

From Sanders’ perspective, there is plenty about Adelson to criticize: Should a billionaire, even presuming the best of intentions, be able to determine political outcomes? Adelson and his businesses no doubt benefit from the policies he funds and defends. By bankrolling the free Israeli paper Israel Hayom, Adelson has helped keep in power Prime Minister Benjamin Netanyahu and hobbled Israel’s once lively and diverse newspaper business.

Those arguments could and often do stand on their own. But Sanders should be able to make the case that Adelson does not have the right to decide for the rest of us what’s best without turning the meaning of the billionaire’s statements upside down, and making Adelson into an archetype of unbridled greed.