The Forward’s Jewish college guide: What does it take to be the ‘best’? 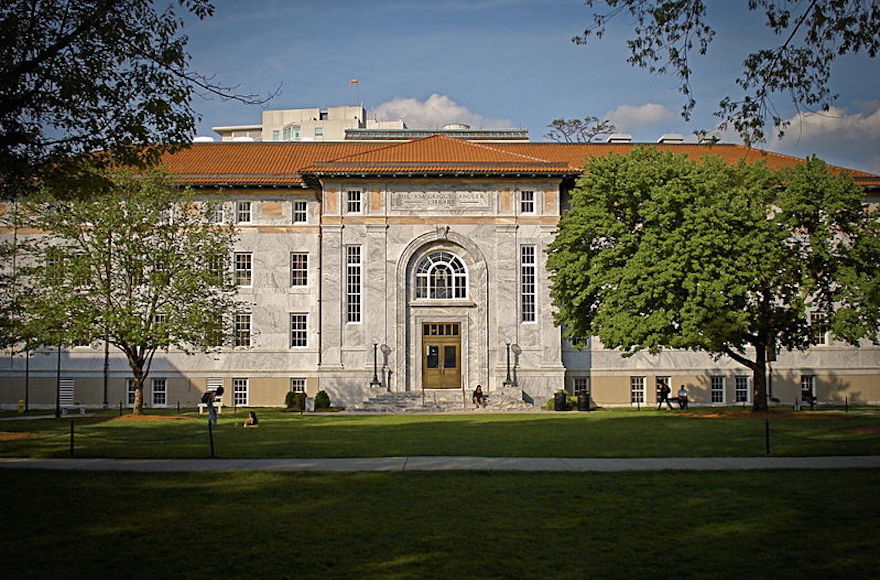 (JTA) — For Jewish high schoolers worried about which colleges to apply to this fall — and, most likely, their parents — the Forward has released a guide to the “best colleges for Jewish students.”

The easy-to-navigate web guide, published Tuesday, is laid out in a ranked list. According to the Forward’s research and methodology, Emory University in Atlanta is the best school for Jews.

The University of Pennsylvania, Washington University in St. Louis, Harvard, Vanderbilt, Tulane, Cornell, Brown, Columbia and American U. in Washington round out the top 10, in that order. The list ranks 171 schools.

Clicking on any school gives the reader a plethora of Jewish statistics and details about the college, ranging from its percentage of Jewish students to a detailed description of its kosher food options to the number of synagogues within 10 miles of campus. There are even mentions of a school’s “Most famous Jewish alumnus,” the number of anti-Semitic incidents in the past year and whether or not its student government has introduced a resolution endorsing the Boycott, Divestment and Sanctions movement against Israel.

The Forward guide joins similar resources from Reform Judaism magazine, which last put out a ranking in 2014, and Hillel International, whose annual guidebook and web page describes schools according to Jewish population, availability of kosher food, Hillel houses and Jewish studies courses.

But like any college ranking, these guides can be idiosyncratic.

Some may be surprised that schools such as Brandeis (No. 18 on the Forward list), Yeshiva University (20), Binghamton (25) or the University of Maryland (26) — colleges known for having a high percentage of Jewish students and plenty of resources for them — are not ranked higher by the Forward.

For others, the Forward’s top 10, which is top heavy with Ivy League and other elite schools, may look like a slightly altered version of U.S. News & World Report’s annual list. This is because the Forward decided to integrate academic performance and, to a lesser degree, cost into its calculations, and not just specifically “Jewish” criteria.

In an accompanying article describing the methodology, editor Laura Adkins explains that each school received four different scores: from a total of 100, up to 40 points were given based on quality of Jewish life, 30 points for academic factors, 20 points for the vibrancy of an “Israel scene” on campus and 10 points for affordability.

Adkins and her colleague Aiden Pink gathered data and information for the guide using the Hillel International college guide (which focuses on general statistics like percentage of Jewish students and includes extensive information about each school’s Hillel chapter), U.S. News & World Report, the Princeton Review and the AMCHA initiative, which tracks anti-Semitic incidents.

The Jewish life category focuses on “the availability and diversity of Jewish institutions on campus, the presence of nearby synagogues (both for praying on High Holidays away from home and for Sunday school jobs to make some extra money), active Jewish student clubs, attendance at Shabbat services, the presence of an eruv, the availability of kosher food, options for a Jewish studies degree, Jewish scholarships, Jewish Greek life, the size of the Jewish population and, of course, anti-Semitism.”

The Israel category analyzes a school’s “average Birthright trip size, active Israel clubs across the political and ideological spectrums, Israel study abroad options, Israel studies programs, and the presence or absence of a formal BDS resolution in the student government or in student referenda.”

By incorporating academics and cost factors into the project, the Forward invites a lively debate about what “best” means in a Jewish context. For example, is Brown, an Ivy League school with a student body that is 15 percent Jewish, a “better” school for Jewish students than Yeshiva, a university affiliated with the modern Orthodox movement (and whose undergraduate population is nearly 100 percent Jewish)? Does mighty New York University (ranking: 12), with 3,500 Jewish students out of 25,722 undergraduates, promise a better Jewish experience than tiny Muhlenberg College (52) in Allentown, Pennsylvania, whose 613 Jewish students make up 26 percent of the student body?

You could say the Forward ranking reflects the various categories that Jewish students and their parents might use to decide what “best” means when it comes to a college — and that for many if not most Jews, academics and affordability cannot be separated from quality of Jewish life and an active Israel experience.

But don’t get hung up on the rankings. The well-researched guide is a deep dive into the state of Jewish life on campus, and more than one of the 171 schools listed may be just right for you.