How these young Jews found spirituality outside the synagogue 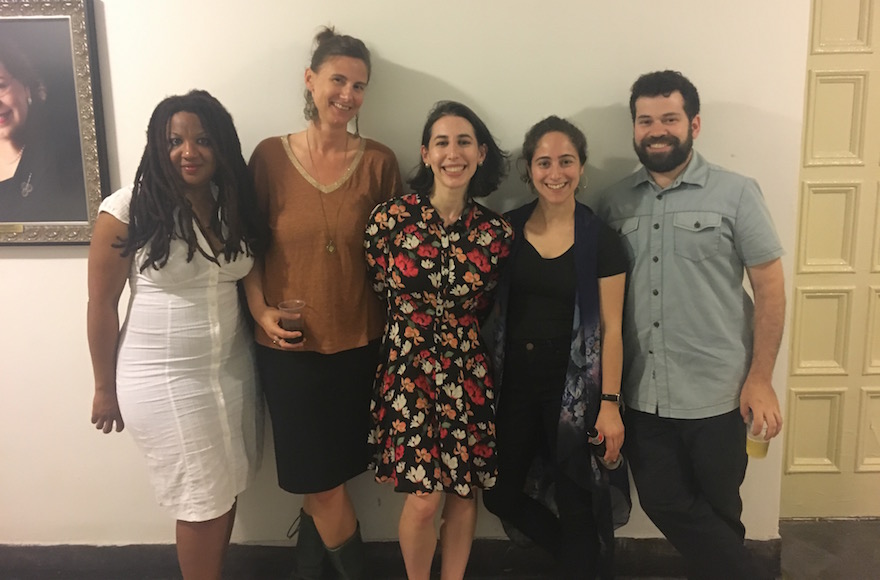 This is the third article in a series examining Jewish groups engaging young professionals.

NEW YORK (JTA) — Michelle Reyf isn’t really a synagogue-goer. Until recently, the 28-year-old, who works for a Jewish nonprofit, was perfectly happy to get her spiritual fulfillment at Buddhist prayer services and meditation retreats.

Synagogue did not appeal to her for a variety of reasons — she found the crowd to be older and the atmosphere to be impersonal. And as someone who identifies as queer, she felt distanced from the traditional values she encountered in many Jewish spaces.

But in January, a friend invited her to attend Shir HaMaalot, an independent minyan, or prayer community, in Brooklyn. There, Reyf found a place that had some of the very same qualities as the Buddhist community she was a part of and that she had not found in traditional Jewish settings.

“It feels like finding a home, and it feels like I’m not a bad Jew for wanting different things than we’re being offered in most synagogues and Jewish communities,” said Reyf, a senior digital organizer for the Jewish social justice organization Bend the Arc.

“I thought maybe Judaism isn’t for me or maybe I’m just not doing it right or maybe I’m different or there’s something wrong with me that I don’t feel like I fit in wherever I go. And then I came to Shir HaMaalot and I was like, ‘These are my people,'” she told JTA.

Shir HaMaalot — a volunteer-led, nondenominational minyan that defines itself as a “traditional-egalitarian havurah” — meets once a month in Prospect Heights and Crown Heights in Brooklyn, often in space rented and subsidized by a local Reform synagogue, Union Temple of Brooklyn. Following a musical Shabbat service, participants join together for a vegetarian potluck meal. There is no rabbi, and community members take turns leading the services.

Reyf is part of a cohort of millennial Jews finding spiritual fulfillment at independent minyanim rather than in the traditional synagogue. Though the groups vary in prayer style, customs and demographics, many are egalitarian or support increased women’s participation in services. They tend to draw a younger crowd than the average synagogue.

Independent minyanim appeal to people looking for a type of religious experience, said Rabbi Elie Kaunfer, the author of a book on independent minyanim and president of Mechon Hadar, a co-educational, egalitarian institution of Jewish learning based in New York.

“In my experience the people who are not going to synagogue it’s not because they’re anti-synagogue … it’s more that they’re looking for something — and if the synagogue has it they’ll go there, and if the synagogue doesn’t they won’t. And I think that’s where Shir HaMaalot comes in,” Kaunfer said.

Kaunfer said Shir HaMaalot, which was founded in 2011, has a reputation for its use of music. In addition, “I think also a place gets its own reputation just by who starts going there, so when people think about ‘Where am I going to go on Friday night?’ now they know they have an option that’s appealing to people in their age demographic, and that can also build on itself.”

There are over 100 independent minyanim across the country, and they are especially accessible to millennials who often have yet to make commitments to Jewish institutions, Kaunfer said.

“What it boils down to in large part is people in their 20s and early 30s have more flexibility in terms of their social groups and commitments,” he said.

The young crowd at Shir HaMaalot was a draw for Gabriela Geselowitz, a 26-year-old journalist and part time Hebrew school teacher. Geselowitz knew she wanted to be involved in a Jewish community after college but had assumed she would be the only young person there.

“When I moved to Brooklyn, I said I wanted to be near a Conservative shul, because that is generally traditional egalitarian, and I was sort of prepared to be the only young person at things. I did go to local synagogue a couple of times, and I was the only young person,” said Geselowitz, who started attending Shir HaMaalot three and a half years ago.

At Shir HaMaalot, Geselowitz found both an age-appropriate crowd and an atmosphere that she enjoys.

“This was even better than Hillel in college in terms of enthusiasm and volume of people and what I’m looking for. I didn’t really expect to find a space that would hit all of my buttons in the way that Shir HaMaalot does,” said Geselowitz, who lives in Brooklyn.

The mood described by Geselowitz was evident at a recent Friday evening service, which she attended with her husband Michael Spitzer-Rubenstein, a 27-year-old working to launch a media startup. 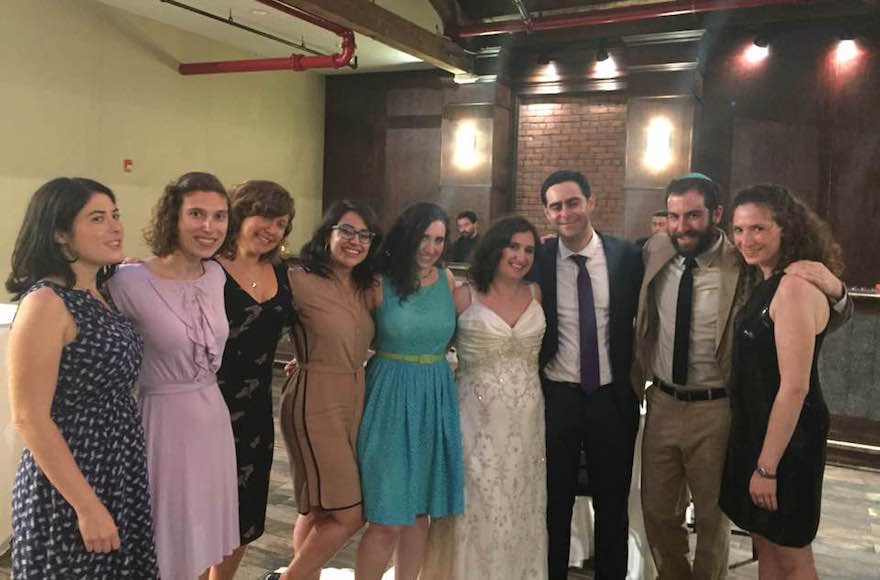 Around 75 people, mostly young professionals with a few older people and young families sprinkled in, sat in chairs set up in concentric circles around the prayer leader, who alternated between singing slow, soulful melodies and faster, more upbeat ones. At various points throughout the service, when the tempo quickened, a young man started playing a djembe drum and people clapped along to the beat. Afterward they gathered around tables in an adjacent room as they ate the buffet-style potluck and talked.

The majority of Shir HaMaalot attendees are young, said Russ Agdern, one of the minyan’s founders and a member of its organizing team.

“It skews towards 20s and 30s, but it’s certainly not exclusively that, and that’s certainly not our intention,” said Agdern, 39, who works as director of recruitment and outreach for the Jewish social justice group Avodah.

Before the minyan was founded in 2011, “there were not really any egalitarian spaces with full Hebrew liturgy in this part of Brooklyn,” said Agdern, adding that the founders wanted to create a “community-driven davening space.”

The founders were active participants in the National Havurah Committee, a network of nondenominational grassroots Jewish communities. The organization has its roots in the havurah, or fellowship, movement, of the late 1960s and 1970s, when an earlier wave of young people sought to create Jewish prayer experiences outside of traditional synagogue settings.

Tobin Belzer, a sociologist of American Jewry at the University of Southern California, believes that the difference between the havurah movement and the independent minyanim is their attitude toward the Jewish mainstream. “Because it was purposely positioned outside of mainstream institutions, the havurah phenomenon was often referred to as the Jewish counterculture. Participants published books and articles criticizing American Judaism,” she wrote in a study of the two movements.

By contrast, minyanim represent a subculture, not a counterculture. “Independent minyanim are not outside of the Jewish mainstream; they are on the margins of it,” writes Belzer. “In fact, many independent minyanim have strong ties with Jewish institutions. Some receive funding from Jewish foundations, others gather in borrowed spaces in synagogues, and still others use Torah scrolls loaned from area congregations.”

Though communities affiliated with the havurah movement vary in terms of practice and affiliation, they are united in the fact that they are egalitarian, mostly volunteer-run and promote wide participation by community members.

Spitzer-Rubenstein likened Shir HaMaalot’s atmosphere to that of services at Jewish summer camps.

“I went to Reform summer camp in California, and it was a similar sort of joy and celebration in praying,” he said. “I feel like there are a lot of Jewish spaces where praying isn’t seen as something that should be fun, and one of the things that I really like about Shir HaMaalot is that people care about and make it something significant.”

The participatory aspect of the minyan appeals to Andrea Birnbaum, a 27-year-old medical student who has been attending Shir HaMaalot for four years.

“It’s not performative in the sense that sometimes you go to synagogue and there’s someone on the bimah [podium] who has the most energy, and they’re trying to get the crowd moving but the crowd has a low energy,” said Birnbaum. “It’s not like that. This is participatory — we rotate every time someone leads the davening, the prayer.”

For now, Geselowitz and Spitzer-Rubenstein, who attend other independent minyanim in Brooklyn when Shir HaMaalot doesn’t meet, don’t feel like they are missing anything by not belonging to a synagogue.

“Shir HaMaalot is free — we’re happy to donate to it, but there aren’t synagogue dues. At this point in my life I actually like having a lay-led community rather than a single rabbinic authority,” Geselowitz said. 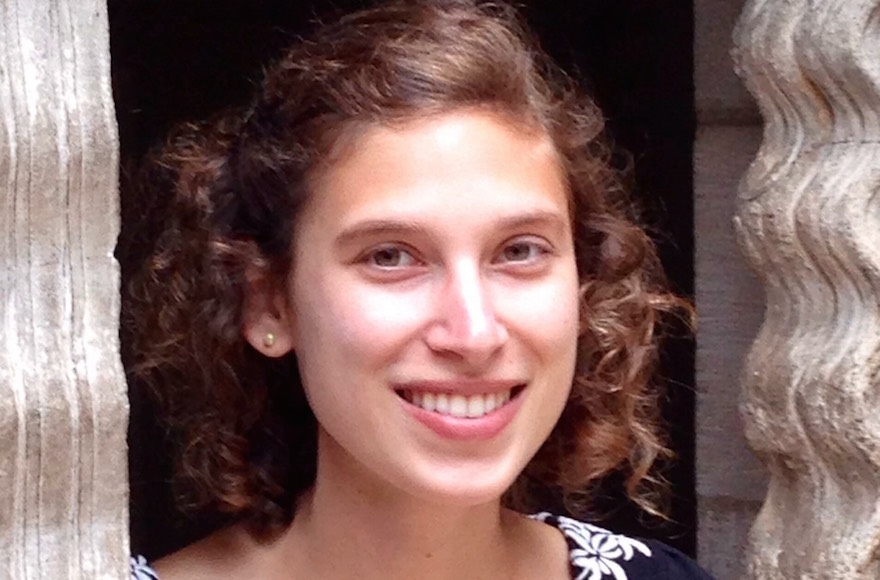 “What also was really cool was that there were a lot of different gender expression, people who weren’t necessary [conforming to the gender] binary, and for me as a queer person that was really important to see that it isn’t a heteronormative place where the gender binary was being enforced,” Reyf said.

On its website, Shir HaMaalot encourages people “to add your preferred pronouns to your name tag.”

Pluralism is an important goal for the minyan, said Gregory Frumin, a 35-year-old social worker who serves on the minyan’s organizing team.

“One of Shir HaMaalot’s core values is inclusive pluralism. We want to create an accessible and welcoming space for people of diverse backgrounds, identities, accessibility needs,” he said.

At the potluck dinner after services, food is served on three different tables — vegetarian, vegan and vegetarian cooked in a strictly kosher kitchen. Participants are also asked to list allergens on a spreadsheet prior to services.

“I think it’s also important that Shir HaMaalot takes their religious observance seriously while still being welcoming to basically everyone,” said Spitzer-Rubenstein.