Welcoming refugees to America by teaching them to make avocado toast 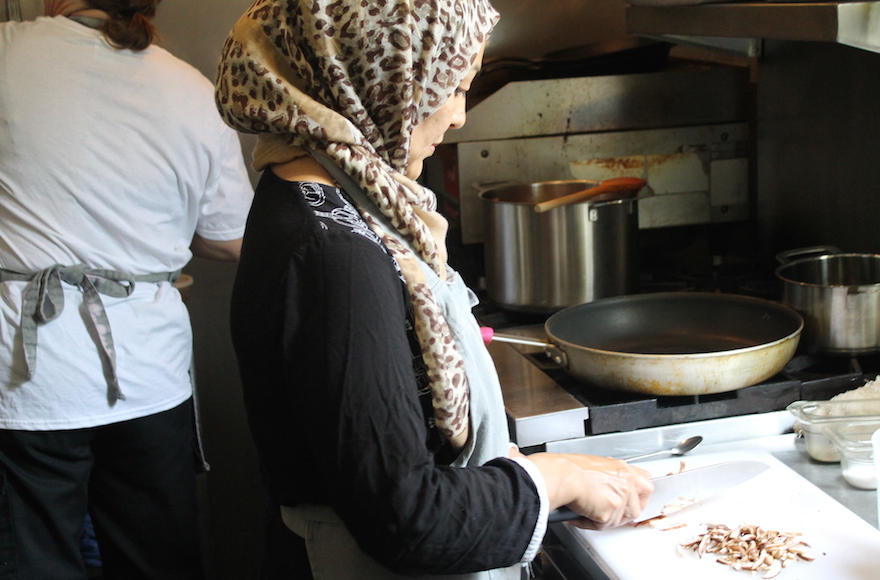 Naseema, a refugee from Afghanistan who did not give her last name, chops mushrooms for shakshuka,, Aug. 11, 2017. (Ben Sales)
Advertisement

NEW YORK (JTA) — Two chefs — one from Afghanistan, the other from Mexico — are learning how to make shakshuka sauce.

The tomato base, cooked with onion rings and spiced with cayenne pepper and garlic confit, comes out of the oven with eggs and onto a curated brunch menu also including a wild mushroom galette with wilted greens, a cheddar chive scone and, of course, avocado toast. The aroma wafts through the air in a small, floral courtyard at the edge of Brooklyn behind a small storefront on a street lined with brunch places.

It sounds like a hipster cliche. But what makes this brunch place different is that not long before they arrived in this kitchen, the chefs — Sandra Marquez and Naseema, who did not give her last name — were refugees fleeing their respective countries and hoping only to find a safe haven in the United States.

Now they’re in the midst of an eight-week culinary boot camp preparing them to work shifts in kitchens around this city. Five weeks ago they barely knew how to hold a professional kitchen knife, let alone how to plate a shakshuka. In a few weeks they will each be off to a restaurant job. Two new chefs, also coming in unskilled, will replace them.

The boot camp is the core mission of Emma’s Torch, a new nonprofit that aims to train refugees as professional chefs. The program — and eponymous brunch place — are named for Emma Lazarus, the Jewish poet whose verses welcoming immigrants adorn the Statue of Liberty. The obligatory menu chalkboard outside the restaurant bears a sketch of the green lady with a cartoon bubble declaring “Give me your avocado toast, your mimosa …” The statue itself is visible from a few blocks away.

“I was always intrigued by this idea of how can you merge the culinary industry with employment programs for the refugee community because there are so few opportunities for them once they’re in the U.S.,” said Kerry Brodie, 27, the organization’s founder. “Cooking is one of those ways you can communicate without language.”

Brodie conceived of Emma’s Torch in her previous job at the Human Rights Campaign, an international LGBT rights group, where she would connect with refugees from around the world. She began teaching a cooking class for local refugees in her apartment after work (“just, like, for fun”) that would deliver meals to a women’s shelter.

Last year, Brodie quit her job to attend culinary school. After graduation, she took an early morning job — start time, 5:30 — at a bakery and spent her afternoons setting up the pilot program for Emma’s Torch. 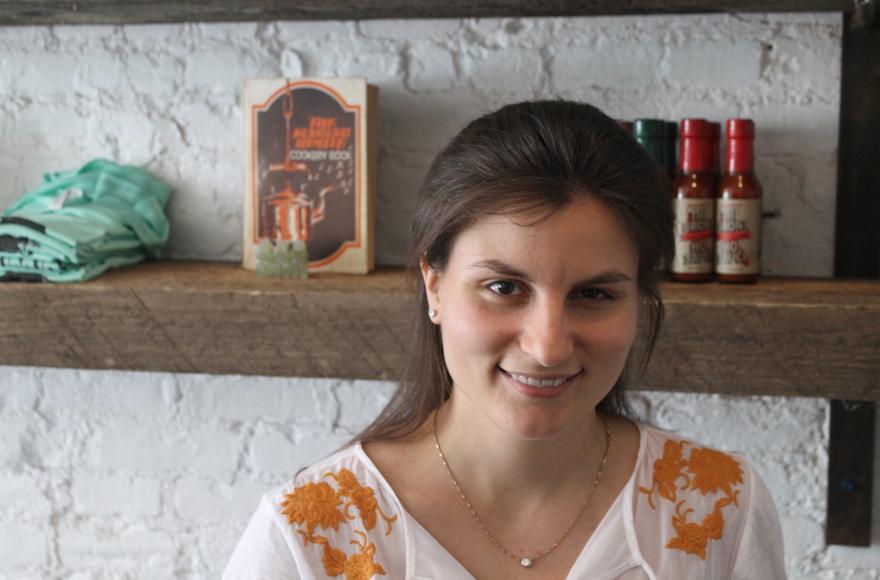 Kerry Brodie founded Emma’s Torch after running cooking classes for refugees out of her apartment in her spare time. (Ben Sales)

The nonprofit has been operating for six months, the restaurant for two. Brodie soon will welcome her third two-person cohort to the culinary crash course, which comes with a $15 per hour salary. The program has received 50 applications from refugees Brodie reaches through large resettlement agencies. She also runs an eight-person English-as-a-second-language class on Thursdays that is geared toward teaching phrases used in the kitchen.

“Our students will thank me when they get their paychecks, and I’m like, ‘That’s nice, but I’m not giving you anything. You are bringing joy to this community,’” said Brodie, who also has served as the communications director for the Israeli Embassy in Washington, D.C., where she grew up. “It’s showing people who for so long were treat as victims, no, you bring something immensely valuable to the table.”

Brodie selects culinary students with a love of food but with no formal restaurant training. The students learn techniques and skills on Friday, then put them to use on Saturday and Sunday when the restaurant is open for brunch.

Because the students need to gain culinary proficiency in just eight classes, they learn at a frenetic pace. Last Friday Marquez, a survivor of human trafficking from central Mexico, was flattening dough, while a couple feet behind her at an opposite counter Naseema, from Kabul, was chopping shiitake mushrooms for the shakshuka. On a shelf next to them sat slices of pizza with vegetables and feta cheese — the lunch they had just made and eaten. 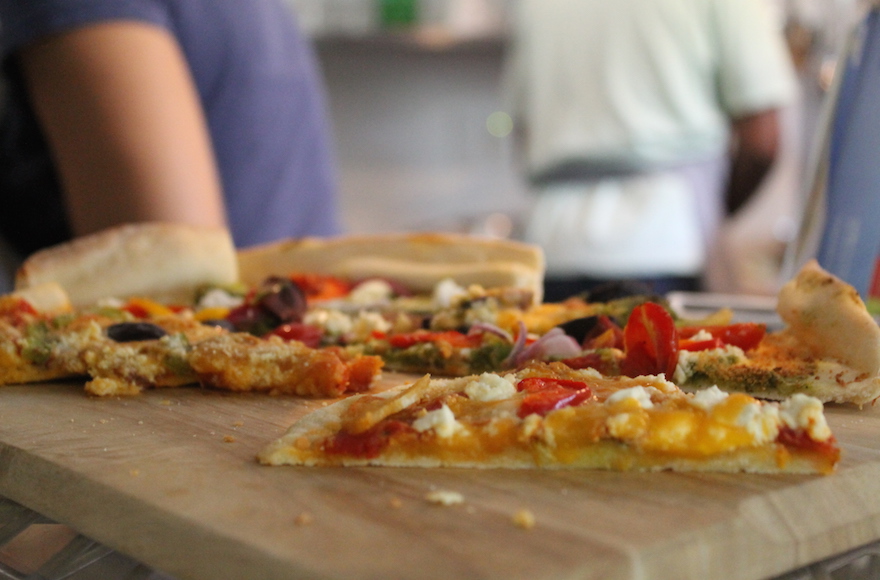 On their training days, the student chefs make their own lunch, such as this vegetable pizza with feta cheese. (Ben Sales)

That day, they would learn everything from the names of various pans to the different stations of a commercial kitchen to spice combinations to the finer points of plating. Both women are still learning English, so each class includes a lot of repetition of terms — like “hotel pan” or “deglaze.”

“Hopefully, it’s as many transferrable skills as possible, not just into the commercial kitchen but into their lives,” said Laura Licona, a doctoral student in anthropology turned chef who used to also run a refugee food bank and now serves as the culinary director for Emma’s Torch. “We end up doing a lot of repeating, a lot of writing things down, learning a word and then explaining it in multiple contexts.”

One advantage of teaching refugees to cook is that they draw on recipes they made back home. Working with saffron a couple weeks ago, Naseema showed Licona how to create a paste by melting an ice cube into the spice, which she then patted onto crostini.

But Marquez said she also enjoys departing from her traditional foods and enjoys making Italian cuisine. She hopes to someday open her own restaurant. In the meantime, she wants to find a job as a baker after the course ends.

Through a series of cold calls and emails, Brodie has connected with chefs who can help her graduates find entry-level work in New York kitchens. Brodie says that because many young chefs (like her) prefer to strike out on their own these days, it isn’t hard for someone with training to find good culinary work.

As for Emma’s Torch, Brodie didn’t expect Emma Lazarus to be a controversial news figure when she started the project early last year. Brodie said it was “laughable” to think, as White House adviser Stephen Miller declared on Aug. 2, that the poet’s verse welcoming immigrants wasn’t the true message of the statue — or that welcoming immigrants isn’t an American value.

“It’s a joke of history,” she said. “That statue and its presence in our nation’s psyche is all inherently tied to that concept that to be American, what defines us and what makes us great, is our ability to welcome in the stranger.”