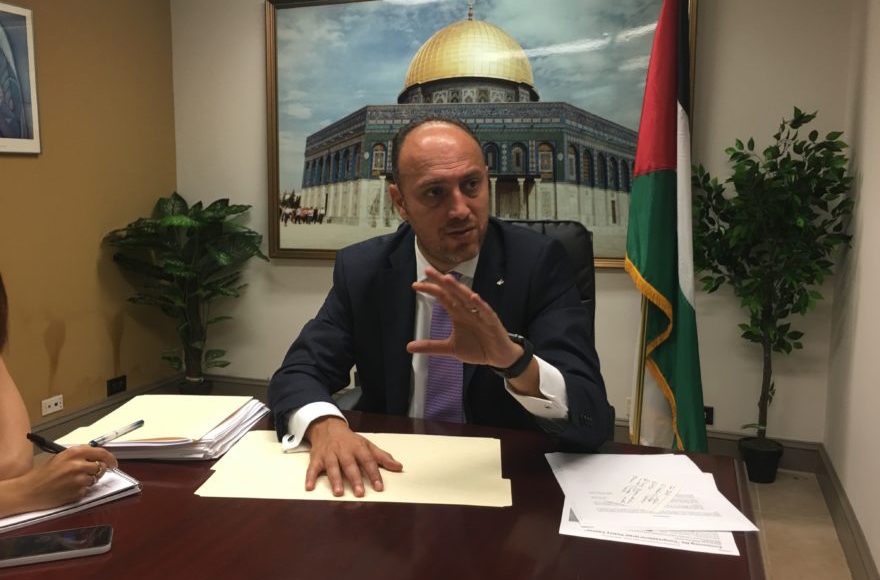 WASHINGTON (JTA) — The Palestinian Authority expects the Trump administration to commit to a peace deal endgame before the close of this month and prefers it would be the two-state solution.

“We need them to tell us where the hell they are going,” Husam Zomlot, the Palestine Liberation Organization envoy to Washington, said Thursday at a meeting in his office with reporters. “It’s about time we hear it.”

The meeting will come toward the end of a tour in which the U.S. officials also will meet with Israeli and other regional leaders, including from Egypt and Saudi Arabia.

Zomlot said that for the Palestinian Authority, the preferred outcome remained a recommitment to the two-state solution. Trump retreated soon after assuming the presidency in January from a two-state outcome, which has been U.S. policy since 2002. Israeli Prime Minister Benjamin Netanyahu, who had committed to a two-state solution in 2009, also has been silent since then about his commitment. A majority of Netanyahu’s Cabinet opposes having two states.

“A two-state solution has international equilibrium, it has regional backing and it has a global consensus,” Zomlot said. “We are saying to them, we have a starting point, and letting go of this starting point is the worst thing they can do.”

Zomlot said the Palestinian Authority wanted two states based on the 1967 borders, and wanted to hear from the Trump administration how best to deal with factors that would endanger a peaceful outcome, including Jewish settlements, the humanitarian crisis in the Gaza Strip and religious tensions at Jerusalem’s Temple Mount, which both Jews and Muslims claim as holy.

“The how is crucial,” he said.

A major obstruction to advancing peace talks has been the absence of P.A. control in the Gaza Strip, where the Hamas terrorist group is the authority. Abbas and the Palestinian Authority, along with Israel, have been squeezing Gaza by reducing basic supplies to its Hamas rulers, including electricity.

Zomlot would not say what the Palestinian Authority would do if the U.S. delegation did not lay out an endgame, but said uncertainty could lead the P.A. to return to seeking international recognition for statehood — a posture that Israel and the United States adamantly oppose — or to further Palestinian resistance against Israel. He said the resistance would be “peaceful.”

Zomlot conveyed an overall positive impression of Trump and his negotiators, saying they had carefully considered Palestinian positions, and that Trump’s commitment to an endgame rather than simply perpetuating the process was positive.

“The character of President Trump himself — we believe this is a person who could actually take the leap, who could exert pressure on all sides,” he said.

Zomlot and the Palestinian Authority appear to be relying on pressure by Trump as a means of delivering Israel on the two-state solution. Zomlot made clear that he did not believe Netanyahu had the wherewithal to advance to final status negotiations on his own.

“Netanyahu is behaving like a politician, not a statesman,” he said of the prime minister’s coalition maneuvering, in which he must deal with partners who oppose concessions. “Israel deserves better leadership.”

Zomlot expressed anger with Congress and the welter of proposed bills that would cut U.S. assistance to the Palestinian Authority and otherwise penalize it. Chief among the measures is the Taylor Force Act, named for an American stabbed to death in a 2016 terrorist attack, which would link funding to the Palestinian areas to the cessation of P.A. payments to the families of Palestinians killed in or jailed for attacks on Israelis.

He said the Palestinian Authority was ready to “revise and negotiate” its payment system, but would not submit to pressure.

“Don’t use financial pressure with us,” he said. “It does not work.”