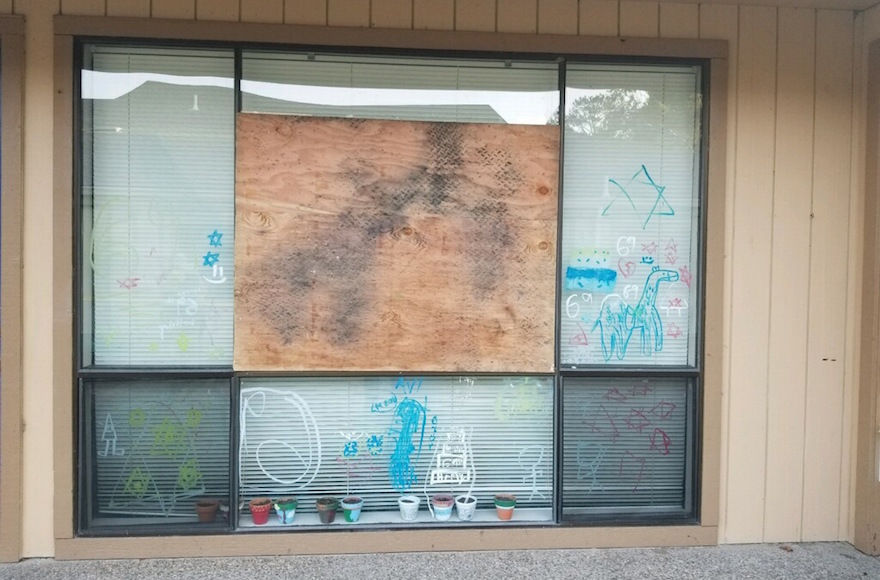 SAN FRANCISCO (J. The Jewish News of Northern California via JTA) — Police  are investigating what appears to be vandalism at Temple Israel in the Bay Area city of Alameda.

At about 6 p.m. Thursday, congregational president Genevieve Pastor-Cohen sent an email to the congregation stating, “in the morning, it was discovered that two classroom windows had been smashed,” and noting that police and Harbor Bay Security had been notified.

“During our Weds. Aug 16th Board of Directors meeting, we discussed the possibility of our synagogue being a target in our small town of Alameda especially with the ongoing expression of bigotry and anti-Semitism,” the letter continued. “It breaks my heart and soul to be exposed to this type of mindless and senseless action especially aimed at the community I (we) love.”

Congregant Mel Waldorf went to the synagogue after he received the email, and told J. that one of the windows that had been smashed “was where kids had painted Stars of David.”

He also said that another window that noted this was “the new Temple Israel” had been smashed. Waldorf said that police took away a rock the assailants had used in an effort to smash in the front door.

“There’s no question that the attacker knew this was a Jewish institution,” he told J.

In her email to the congregation, Pastor-Cohen noted that a security plan had been developed this year by a synagogue task force, and added that the plan will be re-examined after this incident “to ensure our community is protected and safe from harm, especially with our High Holy Days coming upon us.”

Police told J. that a report had been filed, and the case was being investigated. No further details were available at press time.