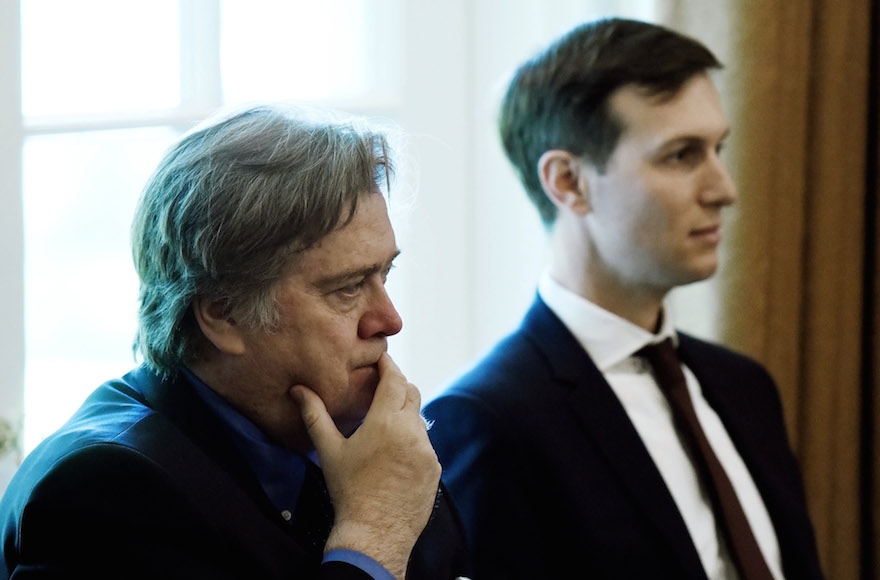 A report Sunday evening in Vanity Fair titled “Steve Bannon Readies His Revenge: The war on Jared Kushner is about to go nuclear,” said that Bannon’s targets in the West Wing are the “globalists,” identified as Ivanka Trump, Kushner and former Goldman Sachs president Gary Cohn, the chief economic adviser to Trump and director of the National Economic Council, as well as the “hawks,” identified as National Security Adviser H.R. McMaster and his deputy, Dina Powell.

The magazine cited Breitbart News Editor-in-Chief Alex Marlow as saying that Bannon “wants to beat their ideas into submission. Steve has a lot of things up his sleeve.”

Bannon has returned to head the right-wing website Breitbart News after being removed from his White House post on Friday, nearly a week after he welcomed President Donald Trump’s divisive comments on a far-right rally in Charlottesville, Virginia. He had left Breitbart to join the Trump campaign last year.

An unnamed Bannon ally told Vanity Fair that the former White House strategist called Kushner, an adviser to the president as well as his son-in-law, “a dope,” and that the two clashed fiercely on personnel decisions and policy debates, both domestic and international, many of which Bannon lost.

Unnamed Bannon allies told the magazine that Bannon had lobbied the president “aggressively” to move the U.S. Embassy to Jerusalem from Tel Aviv, a move that they say was blocked by Kushner. The report also noted that Bannon stayed away during a May visit by Palestinian Authority President Mahmoud Abbas to the White House, texting to a friend that “I’m not going to breathe the same air as that terrorist.”

On Sunday, the Breitbart website’s lead story was headlined “Report: Ivanka Trump Helped Push Steve Bannon Out Of The White House,” based on a Daily Mail report that said “Trump’s daughter Ivanka pushed out Bannon because of his ‘far-right views’ clashing with her Jewish faith.”

Breitbart updated the article to say “A senior White House aide informed Breitbart News that the Daily Mail report was ‘totally false’ and called into question the sources in the article of having any real knowledge of the Trump family.”

Bannon had been under fire since he began working for the Trump campaign. He has been criticized for calling Breitbart News a platform for the “alt-right,” a far-right and white nationalist movement that includes anti-Semitic figures and followers. Bannon has denied he is anti-Semitic, and supporters point out that Breitbart is pro-Israel.