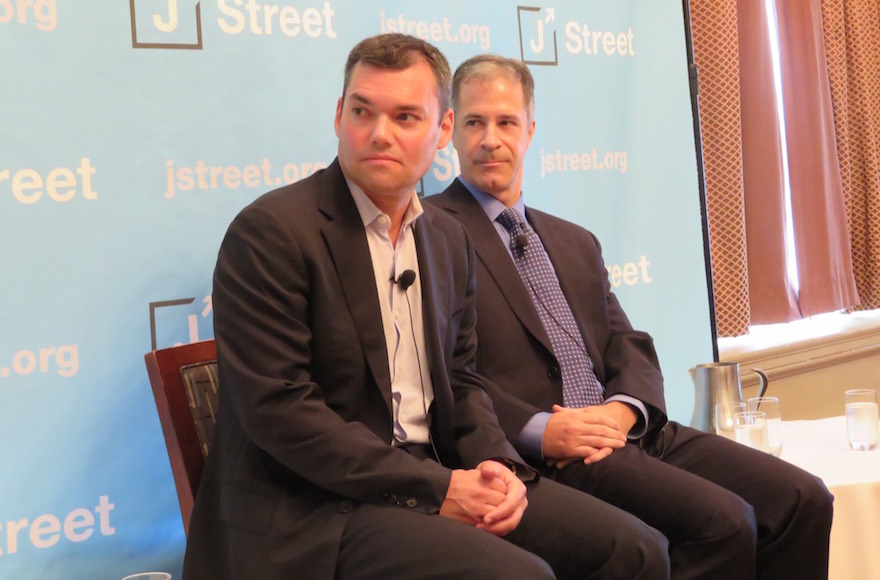 Speaking earlier at a J Street session, journalist Peter Beinart, who has written extensively about the drift away from Israel among millennials, said Jewish leaders needed to retool.
Advertisement

(JTA) — Peter Beinart, the liberal Jewish essayist, shared his feelings about Charlottesville on Twitter on Aug. 18:

“Yesterday my 9 year old saw some footage from Charlottesville. Then she asked me if there would be a second Holocaust,” he tweeted.

Yesterday my 9 year old saw some footage from Charlottesville. Then she asked me if there would be a second Holocaust.

When I saw the tweet, I got it immediately: I had been in Charlottesville the day of the violent clashes between white supremacists and counterprotesters, and my worried teenage sons asked me about it afterward.

I didn’t know what to say because, let’s be honest, seeing Nazis march in 2017 is a gut-churn when you couple it with the faith that parents (irrationally, necessarily) maintain in what happens on this earth after we return to its dust. I froze. (My wife noticed I froze and sent them my story.) So kudos to Beinart for being able to talk about these things with his daughter.

Twitter was not so understanding. What Beinart got in response — at least initially — was disbelief and mockery.

“Nobody believes that for a second,” said someone with the Twitter handle JammieWF who has 12,000 followers.

Nobody believes that for a second.

@ReallyBroReally, who has 10,800 followers, resorted to sarcasm:

My 8 year old was watching the left tearing down statues and wanted to know if this was the start of cultural cleansing…. 🙄

And on it went.

David Nir, the political director at the liberal Daily Kos website, was appalled and said so on Tuesday.

Wow—basically every response to this @PeterBeinart tweet mocks his 9yo daughter for worrying about another Holocaust https://t.co/b3wgIwBT9D

Thank you Peter for sharing your daughter's concern about the intolerance in our country; important topic to discuss with all children.

Beinart, too, was amazed and understandably angry.

“This is close to the last subject I’d lie about,” he said on Twitter.