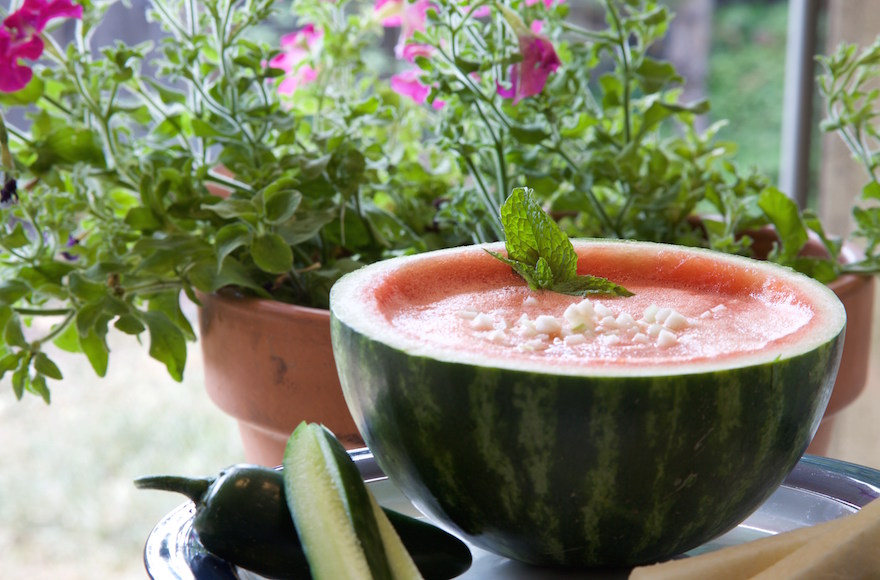 (JTA) — With the temperature in the mid-80s, it was not the night to kick off Shabbat dinner with chicken soup, or rather, given our family’s eating mishegas, vegan chicken soup (yes, there is such a dish). So where or whom do I turn to for a seasonal alternative?

Answer: Chef Mark Reinfeld, who as the “30-Minute Vegan” has a series of books filled with recipes that I’ve found are sure to come out right and always taste great. (Reinfeld most recently authored “Healing the Vegan Way: Plant-Based Eating for Optimal Health and Wellness.”) When vegetarian and vegan newbie friends ask me to recommend fail-safe cook books, Reinfeld’s are at the top of the list.

So for this sultry Shabbat, I chose Raw Peaches and Cream Soup (don’t get fatootzed about the word “raw”), which turned out to be a hit with a Friday night dinner crowd that included rabbis, an Episcopal priest and their spouses.

I was lucky to meet up with Reinfeld on a very un-summer night in February near Boulder, Colorado, where he lives. There he told me about growing up in a traditional Jewish family in Stony Brook, Long Island, that kept kosher and ate chicken every Friday night.

After Reinfeld spent his junior year at the London School of Economics, which he followed with a backpacking trip across Europe, he found he just couldn’t embark immediately on his plan A, attending law school right after college.

After his acceptance into New York University Law School, Reinfeld deferred his admission and decamped one more time to Europe. In Paris, he worked as an au pair. In the mornings, he helped his charges with their homework. But he spent his afternoons walking the streets of the French capital “holding a baguette and bottle of wine,” as he likes to put it.

From there he traveled to Amsterdam and Berlin. Forrest Gump-ishly, he witnessed the fall of the Berlin Wall, then managed to hit Prague in time for the Velvet Revolution that brought down the ruling Czech Communist Party. His next stop: Kibbutz Mishmar HaEmek in Israel, where he worked with (and then ate) chicken five and sometimes seven days a week. 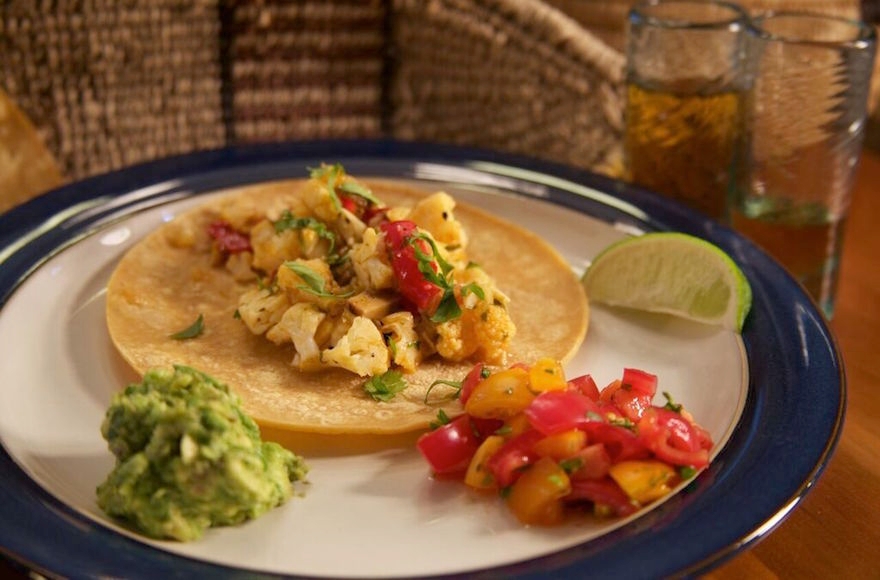 Reinfeld remembers the kibbutzniks chasing and catching the chickens in vast shed-like coops, then handing them over to the volunteers.

“We’d have to take them out to a truck,” he recalls. “The chickens were screaming and their legs were breaking in your hands. That is precisely when I realized that I couldn’t do this, and I couldn’t eat them. So I gave up chicken cold turkey.”

Reinfeld laughs before describing another I-can’t-eat-animals-anymore epiphany: It happened when he bonded with cows in the field next to the kibbutz.

Back in America, Reinfeld started law school, dropping out after the first semester when he realized this wasn’t the direction he wanted his career to take.

Somehow the spirit of his maternal grandfather, Ben Bimstein, a caterer who Reinfeld describes as a “culinary genius” and a renowned ice carver, guided his next move.

“Until his dying day,” Reinfeld says of Bimstein, “he was still carving ice in his wheelchair with his oxygen tank and something like a chainsaw.”

Reinfeld loaded his possessions into his car, drove west until he hit San Diego and landed a kitchen job at the natural foods grocer Jimbo’s. From there he quickly became a meatless entrepreneur, starting Blossoming Lotus Personal Chef Service in Malibu, California, and ending up, with the help of angel investor Bo Rinaldi, as the co-owner and chef of the award-winning Blossoming Lotus restaurant in Kauai, Hawaii.

By this time, Reinfeld also was a practitioner of Vipassana, a type of Buddhist meditation, and actually started his restaurant while observing an 18-month period of silence. (“I could type very fast in those days,” he says, laughing.) That didn’t take him away from Judaism, and in a 2013 article for ReformJudaism.org titled “Vegan is the New Kosher,” he outlined the Jewish basis for a plant-based diet.

Reinfeld couples the Talmudic principle of “tza’ar ba’alei chayim” (Bava Metzia 32), which prohibits cruelty to animals, with Genesis 1:29: “God said, “Behold, I give you every seed-bearing plant that is upon all the earth, and every tree that has seed-bearing fruit; they shall be yours for food,” and urges Jews to make the compassionate choice.

“The reality is that factory farm-produced meat, eggs, and dairy (whether kosher or non-kosher) are raised and treated in a way that is a blatant violation of the principle of Tza’ar Ba’alei Chayim,” Reinfeld writes. 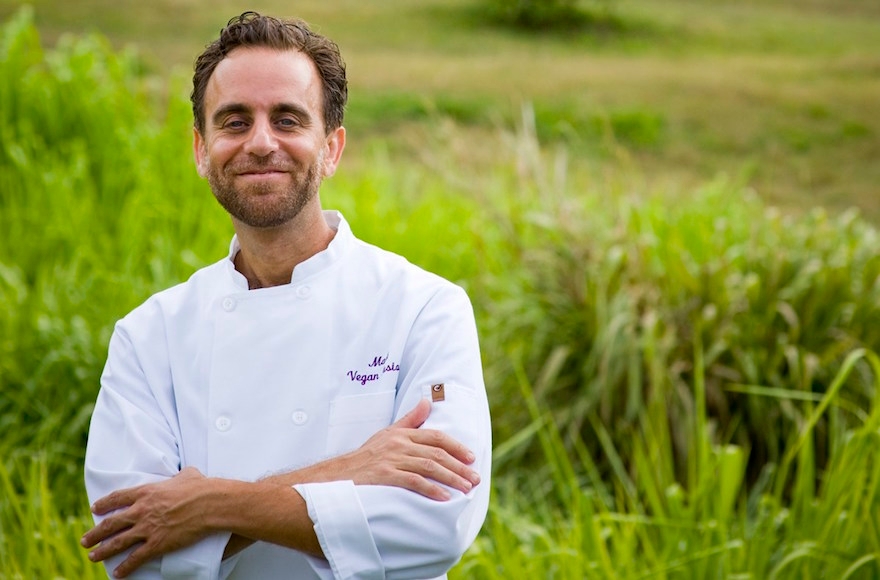 Mark Reinfeld spent time on a kibbutz. (Courtesy of Reinfeld)

A philosophy major as an undergraduate, Reinfeld says he understands that animals kill and eat animals, and that some people eat animals out of necessity.

“If you saw a lion pouncing on a gazelle, you may wince, but you know it’s part of nature and you’re not going to sit the lion down and say ‘I think you have anger issues, why don’t you try tofu?’” he says.

Inhabitants of remote fishing villages in Alaska or isolated tribes with limited access to adequate protein must fish or hunt.

“Where there’s necessity,” Reinfeld says, “there is a different moral issue, but when we have a choice of how much violence we bring into the world through our food selection, and we know we can meet our body’s nutritional needs, eat tasty food and minimize our environmental impact,” then one can draw a different line.

Back on the mainland, Reinfeld continues his vegan entrepreneurship. Called “the male equivalent to a vegan Rachael Ray” in a Publisher’s Weekly review of “Soup’s On,” a cookbook in his “30-Minute Vegan” series, Reinfeld is dedicated to popularizing vegan eating and living and compassion toward animals. Through his Vegan Fusion company, he offers consulting, chef services, culinary workshops, and chef and cooking teacher training internationally and online.

In July, Reinfeld was inducted into the Vegetarian Hall of Fame.

Time for another late summer Shabbat dinner — and the soup. I promise you, it’s a snap to make and takes minutes. And I also guarantee that you won’t be able to tell the difference between cashew cream, a staple of vegan cooking, and the “real” thing, heavy cream.

My Episcopal priest friend, a regular at our Shabbat table, loved the soup, and weighed in after his last spoonful: “Honest and fulfilling. Not a sweet, cutesy, fruity thing.”

Preparation:
Place the cashews in a small bowl with ample water to cover. Allow them to sit for 20 minutes. Drain and rinse well. (This is why Reinfeld is such a practical vegan chef: Most vegan recipes instruct you to soak cashews overnight.)

Meanwhile, place all of the peach soup ingredients, except the mint, in a strong blender and blend until creamy. Transfer to a bowl.

Place the cashews in the blender with the water and the coconut nectar (or whichever sweetener you’re using) and blend until very creamy. Transfer to a small bowl.

Garnish each bowl of soup with a drizzle of cashew cream and top with fresh mint before serving.

Variations:
* It would be a raw foodist’s call to 911 — yes, this is how Reinfeld writes — but you can grill the peaches until char marks appear, about 5 minutes, lightly basting with melted coconut oil before blending.

* Replace the peaches with nectarines, mangoes, blueberries or papayas. (I tried several batches with blueberries, which also worked well, although less sweet than the peach. You might try to prepare two versions, and delicately place them side by side in each soup bowl, in a yin/yang design.)

* Replace the apple juice with orange, pineapple or mango juice, or a combination of your favorites.

(Elisa Spungen Bildner is 99 percent vegan [she cheats on ice cream]. She is a member of the board of 70 Faces Media, JTA’s parent company.)