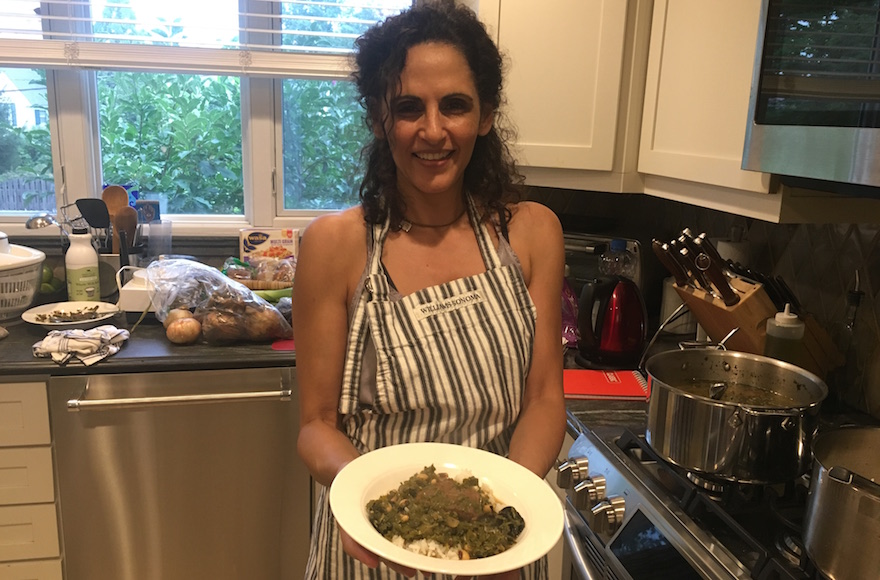 TENAFLY, N.J. (JTA) — Ayala Hodak usually cooks the way her mother taught her: adding a pinch of spice here or relying on her eyes — never a measuring cup! — to judge how much liquid to add.

But on a recent Tuesday, she was being much more meticulous.

At her spacious home in this suburban town less than 15 miles from New York City, Hodak, 52, who grew up in an Iranian family in Israel, measured the amount of salt and pepper she added to a stew. She also paused to demonstrate how thickly to cut a piece of beef.

Her reason for the precision: Hodak’s recipe was being recorded by a new nonprofit, the Jewish Food Society, which aims to be an archive of Jewish recipes from around the world.

Its kibbutz-born founder, who once promoted Israeli culture as an employee of the Israeli Consulate in New York, was inspired by the diversity of food traditions in Israel and her desire to preserve them in the Diaspora.

“I realized there is an urgency in capturing these stories because the older generation is about to leave the world, and many of these recipes are labor- and time-consuming in a way that we should really protect them,” the society’s founder, Naama Shefi, told JTA. “These are skills that would just disappear if no one could capture them in a methodic way.”

The project, which launched officially in March and receives financial support from several Jewish foundations, has added over a dozen recipes to its online archive, and more are on the way. Along with the recipes are photographs and stories of the cook’s family history, as well as how he or she learned to make the dish.

Each week, the group interviews a chef and takes down his or her story. If distance permits, a New York- or Israel-based employee will meet with the cook in person; if not, they communicate long distance. All ingredients are measured, and dishes are then re-created in a test kitchen and adjusted accordingly.

Though some participants work in the food industry — Hodak is the manager and co-owner of Taboon, a Hell’s Kitchen restaurant serving Middle Eastern and Mediterranean-inspired food — others are home cooks.

Shefi, 36, came up with the idea after a Shabbat meal in 2005 at the home of her now-husband’s grandmother, who was born in Turkey but also lived in Greece and South Africa prior to immigrating to Israel with her family.

“The flavors really represented all of their previous immigration stories and journeys, and some worlds that do not even exist anymore,” said Shefi, who lives on New York’s Lower East Side. “It was such a vivid expression of disappearing worlds, and of bitter and sweet memories. It was just moving, so I told him, let’s just spend a day with her try to capture a few recipes. It was just really inspiring.” 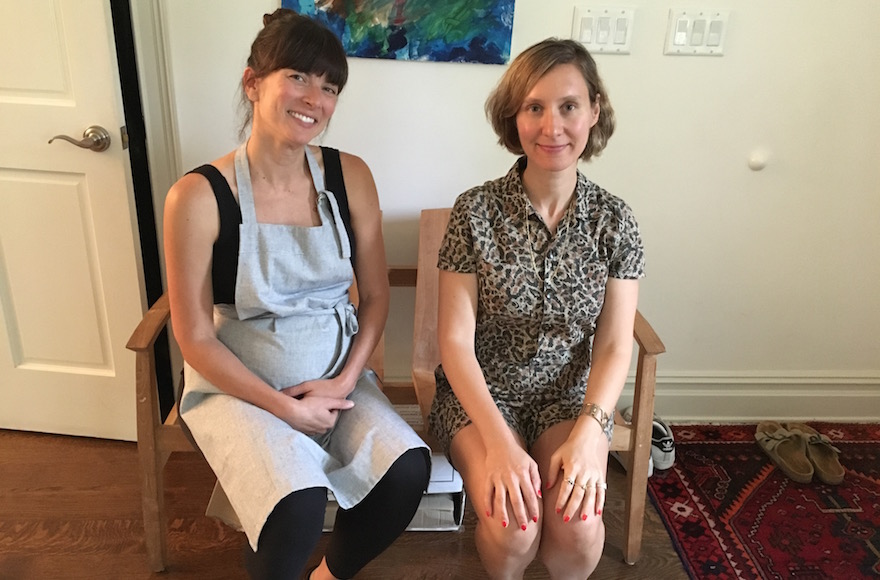 Shefi has always had an interest in food, though she did not get it at home.

“Good food wasn’t part of my childhood,” said Shefi, who grew up on Kibbutz Givat Hashlosha in central Israel. “Between the [kibbutz’s] communal dining room and the fact that my mom is not the best cook in the world, good food was out of reach.”

But as a young girl, she would urge her parents to take her to Tel Aviv’s Carmel Market or a nearby Yemenite neighborhood to try different types of cuisines.

“It became my life’s passion,” Shefi said. “At the beginning just because it tasted really good, but later because I realized it tells a fantastic story about families and people and cultures.”

In 2008, when she took the consulate job, she could use that passion in a professional way. Having just graduated from the New School with a master’s degree in film, Shefi was tasked with promoting Israeli culture. She decided to do so through food, hosting Israel-themed dinners, wine tastings and panels in New York. She also organized trips to the Jewish state for American food writers.

In 2013, Shefi launched the Kubbeh Project, a three-week pop-up in the East Village serving kubbeh soup, an Iraqi Jewish dish featuring meat-filled semolina dumplings in vegetable broth. The project received wide media coverage and had people lining up for hours for a taste of the delicacy.

“The first day I came to the venue at 2 p.m., I saw this line around the block, almost like a ‘Shakespeare in the Park’ line,” she said, referring to the popular free performances in Central Park. “And I was just amazed that these people are waiting for us. This line never stopped for these three weeks and people stood hours and hours in the snow.” 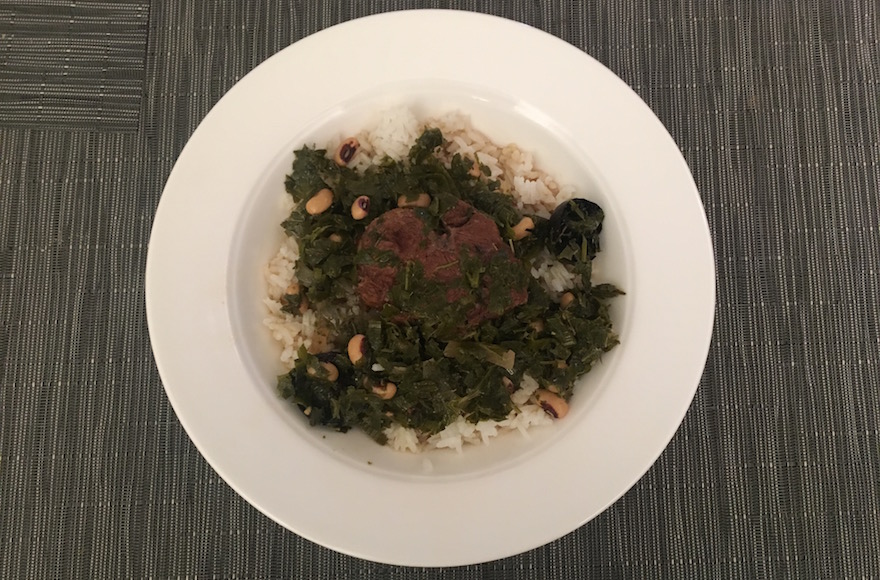 Hodak’s ghormeh sabzi, a beef stew with herbs that is served with rice. (Josefin Dolsten)

Now the Jewish Food Society, for which Shefi works full time, provides a way to combine her two passions: food and storytelling.

“For a while I was really interested in storytelling through filmmaking,” she said. “Still my main interest is storytelling, but the medium changed to food.”

In addition to the weekly cooking session, the nonprofit puts on larger-scale events, such as a Passover seder that showcased three Mexico-born Jewish chefs, and Schmaltzy, a yearly storytelling event where people share the stories behind family recipes. A Moroccan-style Mimouna, a bread-filled celebration held the day after Passover, is in the works, Shefi said.

Her family are Polish Jews, not Sephardi, but Shefi said such distinctions blur in Israeli kitchens.

“Israel is a not just a melting pot, it’s a pressure cooker, so a Polish girl like me considered kubbeh as my own,” she told The New York Times.

Shefi’s long-term goal for the Jewish Food Society extends beyond the archive of recipes. She wants to establish a center for Jewish food in New York, where visitors would be able to take cooking classes and learn about their family’s culinary histories. Shefi describes her vision as “the James Beard Foundation for Jewish food.”

For now, the Jewish Food Society provides a way for Jews to engage with their culture, Shefi said.

“These [recipes and stories] are just huge parts of our lives, of our history as a people, and I feel that for many people that are less connected to Jewish culture and Jewish life, it’s a very inviting window to engage and to explore their identity,” she said.

Food also provides a lens through which to understand Jewish history, she added.

For her part, Hodak is excited to have her mother’s dishes — including ghormeh sabzi, a herb beef stew that her family would eat for Shabbat dinner, and a yogurt soup with cucumber and mint eaten on Shavuot — recorded for future generations.

“I thought it’s a great opportunity to spread my tradition,” she said, “to talk about my mother’s food and to keep it alive.”