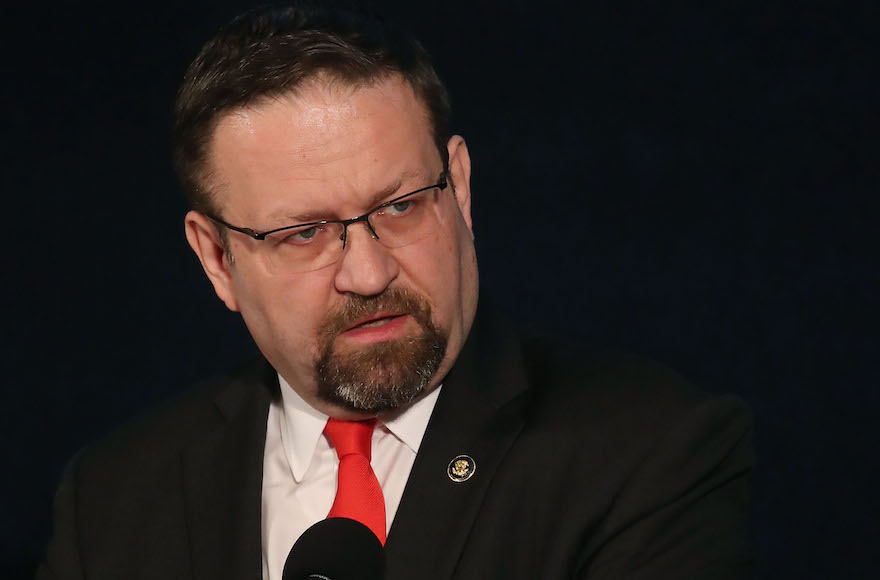 Appearing Tuesday on the talk show of conservative host Michael Savage, Gorka also complained of a “smear campaign” by the Forward, the Jewish news site that reported on his ties to a Hungarian nationalist group with roots in the country’s Nazi-allied government during World War II.

Gorka, a senior security adviser to President Donald Trump before leaving the White House last week, said he believes the left wing has attacked him in the media because of his support for Israel.

“In everything I have ever done, I have been a great friend of Israel,” he said. “I have spoken with honesty about the threat of jihadism in the United States.”

Gorka noted that “some great Jewish Americans came to my defense,” naming specifically Mort Klein, president of the Zionist Organization of America. In March, Klein called Gorka a “great friend of Israel.”

Gorka said that liberal American Jews are “doing so much to betray [America’s] great friendship with Jerusalem.”

He said his left-wing supporters “told me that this is one of the saddest phenomena of American politics now that liberal, the liberal elements of the American Jewish population, has basically become anti-Israeli. It’s the greatest saddest paradox.

An investigation by the Forward months ago quoted leaders of the Historical Vitezi Rend, a namesake of a defunct order of merit that existed under Hungary’s Nazi-allied government, saying Gorka had sworn allegiance to the movement. The original group ceased to exist in the 1940s following Nazi Germany’s defeat.

Gorka has worn the organization’s medal and uniform to public events, saying he does so to honor his father’s anti-Nazi and anti-communist activity. He has denied membership in the Vitez Rend, the original group, but not in the Historical Vitezi Rand. Gorka also has denied being a fascist or anti-Semite.

Jane Eisner, editor in chief of the Forward, said Gorka is accusing the Forward of being anti-Israel and pro-BDS to divert attention from his ouster from the White House.

“Our diligent reporting showed that he had questionable ties with anti-Semitic fascists in Hungary; never received security clearance for undisclosed reasons; and was criticized by many members of Congress, heads of Jewish organizations and upstanding journalists,” she said in a statement. “For the record, the Forward does not support BDS and has supported the state of Israel since its inception. We gave a tepid endorsement of the Iran nuclear deal but so, it seems, does the Trump administration.”

Gorka, a former editor of the right-wing Breitbart News website, is expected to return to Breitbart in some capacity.