You can now bake challah like a boss, thanks to this new cookbook 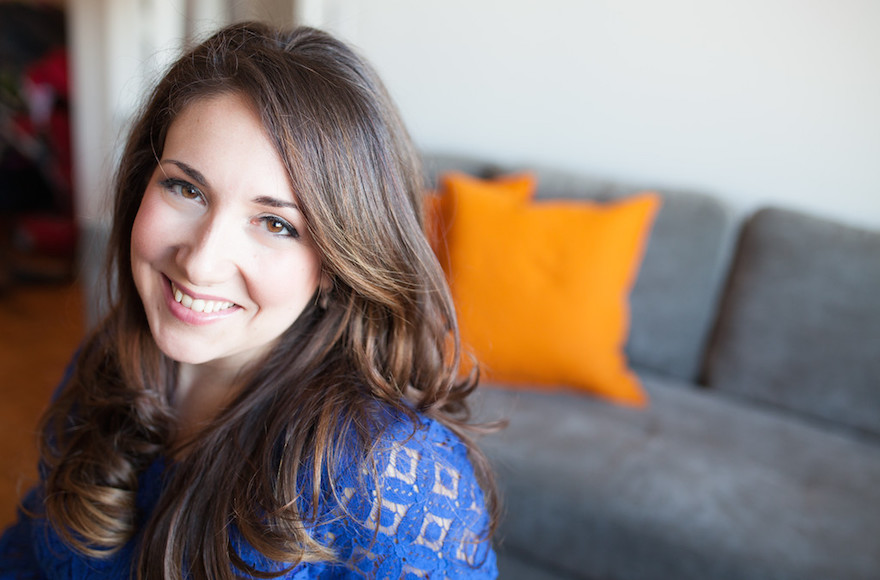 And then there are next-level twists on the classic Jewish bread, like a Pesto and Goat Cheese-Stuffed Challah or a Banana Bread Chocolate Chip Challah.

It may sound like the stuff of dreams, but a new cookbook can help make some of these delicacies a reality in your very own kitchen.

Beginning bakers, don’t be alarmed: The book is a step-by-step guide, complete with beautiful photographs, that shows how a few basic recipes for, say, bagels or rugelach, can be transformed easily into fun fusion creations. In addition to “base recipes,” as she calls them, Sarna provides instructions on a range of toppings and fillings that will have cooks of all skill levels turning on their ovens and turning out something special.

Sarna spoke with JTA about her Jewish identity, what inspires her and how she puts the “modern” into “Modern Jewish Baker.”

JTA: When did you first make non-traditional, or what you call “mixed-up,” Jewish bread? Did it come out the way you thought it would?

Sarna: The very first time I tried a mashup was around 10 years ago, and it was a Rosemary Garlic Challah — a little infusion of Italian-Mediterranean flavors into the classic Jewish bread. From there I tried sundried tomato, Kalamata olive and “everything” flavor, but rosemary garlic was always my favorite, and other people’s, too. I’ve tried lots of flavors — including a Spaghetti and Meatballs-Stuffed Challah, which didn’t quite turn out the way I envisioned — but the first few Mediterranean-inspired flavors I experimented with were actually quite successful.

Challah is an incredibly forgiving bread that takes well to adding various sweet and savory flavors, which is really the inspiration for the entire book: how to take a basic dough and add what appeals to you.

You’re Italian and Jewish, and you’re a champion of recipes that mash different cultures together. Did the concept of combining culinary traditions lead you into trying all of these flavors?

I am really proud that The Nosher features recipes from other Jews, like myself, who are a bit “mashed up” and want to celebrate their identities, family and heritage through food; those recipes are the ones that get me most excited and inspire me. But I think what really inspired me to combine culinary traditions was letting go of my fear of failure. Sure, some things aren’t going to work — but some things will. Who cares? No one can imagine that every dish they make will be a smashing success.

How long did it take you to perfect the techniques and recipes in your book?

It depends on the recipe. I started baking with challah, and that’s the first recipe I really experimented with, so many of the challah recipes have been years and years in the making. Other recipes, like the bagels, were newer additions. But it still took me trial after trial to get it right.

What does “modern” mean in the context of your book’s title? Is part of your goal to reach those with a loose connection to their Jewish identity, or even non-Jews?

When you look at my recipes and understand my background, they and I are far from traditional. Each recipe is rooted in tradition in some way, and each chapter explains the Jewish significance or origin of the recipe. I think Jewish food, as we know, is having a moment — thoughtfully crafted deli sandwiches, gooey babka and Israeli imports like shakshuka, zaatar and labne now have mass appeal well beyond Jews, and so of course I hope Jews, and non-Jews, will enjoy both the classic and not so classic Jewish recipes.

As a child of an interfaith marriage, I always have an eye toward providing avenues for meaningful engagement that are nonjudgmental and positive. If someone has an interest or inclination toward exploring their Jewishness, and babka or bagel baking can be their “gateway drug,” then I am thrilled.

Do you think old-fashioned Ashkenazi Jewish food has become more “hip” in the past few years? Take, for example, Frankel’s Deli in Brooklyn, or Zak the Baker in Miami?

I think the Jewish food renaissance — very much beginning with Jeffrey Yoskowitz and Liz Alpern’s establishment of The Gefilteria and their subsequent cookbook — has reclaimed Jewish food. In turn, they’ve inspired others who felt that Jewish food had so much more potential. Kugel could be made with seasonal ingredients, brisket could be made with grass-fed, organic beef, and even deli food could be elevated.

The “newish Jewish” delis are spread literally all over the country: DGS Delicatessen and On Rye in Washington, D.C.; General Muir in Atlanta; Wexler’s in Los Angeles; Mamaleh’s in Brooklyn. Just this past month, something new opened in Chicago and Rose Foods opened in Portland, Maine.

Americans — Jews and non-Jews alike — are hungry for good Jewish food. And I wouldn’t call it old-fashioned; I would call it classic.

Do any recipes in the book stand out as especially easy (or easier) for a total beginner to try?

I think pita bread is even easier than challah: It has a shorter rise time and it bakes up in literally three minutes or less. It’s also  incredibly good — you can find a good challah in many places in the U.S., but it’s pretty rare to find really good, fluffy pita bread.

What’s your favorite recipe in the book?

The Spicy Pizza Rugelach. That’s partly because it was one of those rare recipes that came out exactly the way I envisioned it in my head. And partially because I feel like it embodies my character: a spicy, delicious half-Italian, half-Jewish treat. 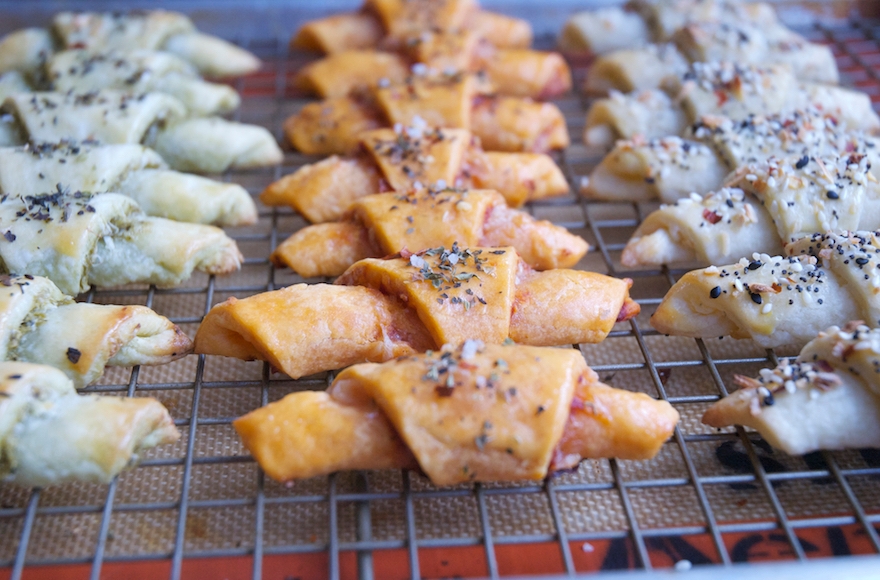 The first thing that will strike you about this spicy pizza rugelach is the beautiful color. And then when you set your teeth into them, it’s like taking that first bite of a great New York slice topped with a sprinkle of red pepper flakes.

Instructions:
In a stand mixer fitted with a paddle attachment, beat the butter and cream cheese until smooth. Scrape down sides of bowl. Add the sugar, salt and tomato paste, and beat until combined. You can also do this by hand.

Add the flour and mix just until dough comes together. Divide the dough into 4 pieces. Wrap in plastic wrap and place in the fridge for 1 to 2 hours, or up to 24 hours.

Roll each piece of dough into a large circle. Using an 8- or 9-inch round, cut dough into a perfect circle. I recommend using a pizza cutter for this task. See pages 164-165 for shaping.

Using the pizza cutter, cut the dough into 8 even triangles. Starting at the longer end, roll up each triangle.

Place the point side down on a baking sheet lined with parchment paper or silicone baking mat.

Bake for 16 to 18 minutes, until golden. Allow to cool on wire rack.