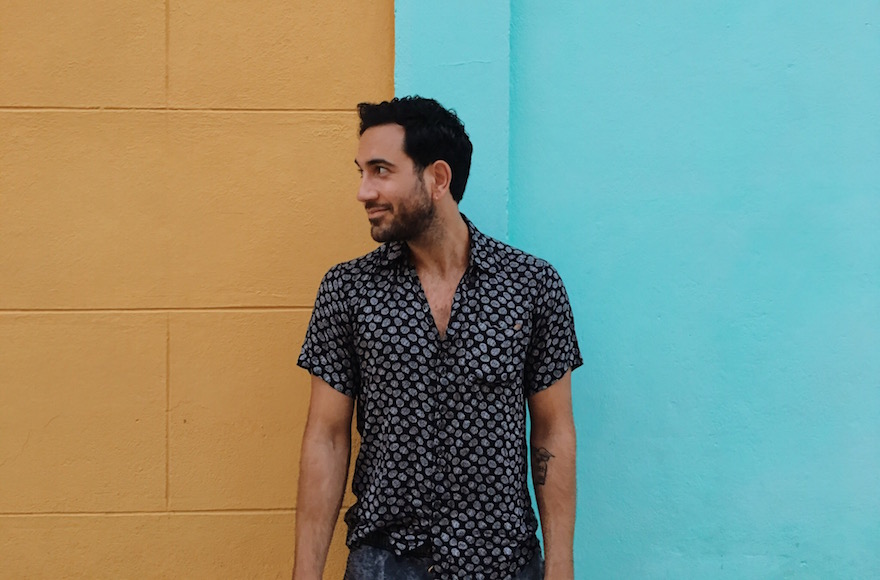 Deevee Kashi is the founder and CEO of Deed, a start-up that offers an easy way for millennials to volunteer. (Courtesy of Kashi)
Advertisement

NEW YORK (JTA) — Deevee Kashi used to promote parties at some of New York’s most exclusive nightclubs, including a  celebrity- and model-laden hotspot once described as a “dark, opulent, high-energy venue for the hottest acts and most beautiful people working today.”

Now he tries to get young men and women to attend, and enjoy, much different kinds of events: serving food at soup kitchens, volunteering with the elderly and taking dogs at shelters for walks.

Last year, the 29-year-old Israeli-American left his job as director of promotions at the Butter group, which owns the international nightclub 1Oak, to work full-time as CEO of his startup, Deed. The user-friendly iPhone app allows New Yorkers to easily sign up to participate in one-time volunteer stints at local organizations.

Since its launch in October, Deed has been downloaded nearly 30,000 times and is working with some 400 to 500 nonprofits around the city.

Kashi — his full first name is Dee-Zahav, the Hebrew rendering of Dahab, a town in the Sinai that his mom used to visit when she was young — grew up in both the United States and Israel. He was born in New York and lived here until he was 13, when his Israeli parents decided it was time to go home. In Israel, they settled in Tel Aviv’s Ramat Aviv neighborhood, where Kashi lived until he was 18, when he returned to the U.S. to study at New York University.

Kashi, who until its closing in March owned the nightclub NeverNever, a hangout for celebrities such as Drake, Miley Cyrus and Bella Hadid, told JTA that his early success can be attributed, at least in part, to his Israeli-type attitude of “do it now, worry about it later.”

“I think I have a hybrid mentality when I’m doing business,” he said during an interview in the lounge of his apartment building in Williamsburg, Brooklyn, which also functions as Deed’s office. “I think it’s a hybrid of [the] ‘just going out there and doing it’ kind of mentality of Israelis and figuring it out later in terms of how things are supposed to work.”

Kashi first got into nightlife as a student at NYU, hosting parties to help pay for tuition.

“I was good at it, and my priorities were in different places, and I was making a lot of money coming out of college, so I couldn’t justify getting another job,” he said.

Though Kashi enjoyed working in nightlife, he felt that something was missing.

In the spring of 2015, he decided to act on his desire to volunteer.

“I just started Googling different opportunities to give back, and at that point I realized that everything else that I do is easy and streamlined and accessible, and when it comes to helping someone outside of yourself, it’s really difficult,” Kashi said.

That’s when he came up with the idea for Deed. In August 2016, he quit his job at the Butter group to work full-time on Deed, officially launching the app two months later.

With Deed, Kashi wants not only to make it easy for people to volunteer, he wants to transform the way nonprofits interact with volunteers. Instead of charging nonprofits for Deed’s services, he plans to earn revenue by partnering with brands, such as enticing them to match users’ donations to organizations. He said he is in talks with several “really, really big brands.”

Kashi said people have met both friends and significant others through the app.

For now, Deed, which has three full-time employees, including Kashi, and five part-timers, is something of a labor of love — he still hasn’t been able to take a salary.

That may change soon — Kashi recently received an offer from “a prominent investor in Israel” to bring Deed there.

“I would love to be in Tel Aviv,” he said. “My whole family is there, so it would give me an excuse to be there for a little bit of time.”

For now, Kashi plans to introduce Deed in Los Angeles in October, which may bring him closer to his ambitious vision.

“Our goal within the next five years is to facilitate 100 million deeds,” he said. “So far, we’ve fed almost 70,000 New Yorkers, mentored over 5,000 inner-city youth, kept company over 4,000 seniors, beautified over 50 public spaces in New York, walked and taken care of over 5,000 dogs at animal shelters.”