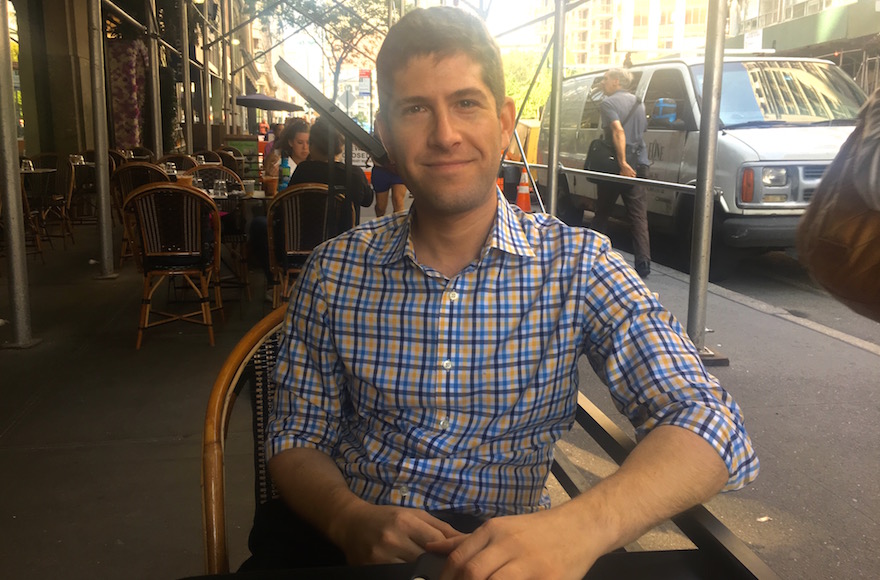 NEW YORK (JTA) — Mike Tolkin apologizes for checking his phone as he sits down at a café in this city’s Flatiron district.

The 32-year-old Democratic New York mayoral hopeful was waiting to hear Tuesday whether he would be allowed to participate in the final primary debate the following day, which would boost his exposure amid an otherwise quiet campaign.

Tolkin, a technology entrepreneur and the youngest candidate on the party’s ballot to challenge incumbent Bill de Blasio, had not met the threshold necessary to qualify for matching funds from the city’s Campaign Finance Board, a requirement to participate in the debate. But he pointed out that other candidates in the past, such as former Mayor Michael Bloomberg, had been allowed to circumvent those rules.

Later that day Tolkin found out that he would not be included — a decision he called “deeply undemocratic and grossly unfair.”

Though polling on the race has been sparse, de Blasio is expected to win the primary and general elections handily.

Still Tolkin, who has founded a handful of startups, remains undeterred.

“It’s been a little bit difficult for us to break through, but I’m a big believer that if you put forth really great, big ideas, you can inspire people, and that’s the best way to mobilize our city,” Tolkin told JTA a week before the Sept. 12 primary.

The candidate, who is Jewish and grew up attending a Conservative synagogue on Long Island, is running on a wide-ranging platform that centers on economic improvement. But it also includes proposals to create a human rights center, legalize marijuana and provide free mental health care.

“The biggest issue, as an overarching theme, is the economy,” said Tolkin, who lives in Brooklyn’s Carroll Gardens neighborhood. “We have to fix the economy, we have to make it work for everyone and we have to grow our economy.”

There are four parts to his economic agenda: restructuring government to make it more efficient and transparent; investing in infrastructure, such as street cleaning services and public transportation; grow and diversify the economy by investing in new industries, such as artificial intelligence, biotech and robotics; and improve income distribution.

Tolkin believes his business acumen makes him the ideal choice for running the nation’s largest city. He founded his first startup while studying at the University of Pennsylvania’s prominent Wharton School, where in 2007 he led a team that created a make-your-own chocolate bar company that won an award for the best undergraduate business plan.

A few years after graduation, in 2011, he founded Merchant Exchange, an incentive-based marketing platform for millennials, and in 2013 he founded two IMAX initiatives, including IMAXShift, a high-tech indoor cycling studio in which scenes are projected onto an extra-large screen. In 2015, he founded his latest venture, Rooms.com, a home design website that offers virtual tours of designer rooms.

Tolkin, however, was compelled to do something different earlier this year.

“What can I do as an individual to be more civically engaged, to take action in light of the fact that there are so many massive challenges?” he wondered. “I can’t sit on the sidelines anymore.”

He launched his mayoral campaign in January, meeting with New Yorkers from all parts of the city. He left the startup world a few months later to pursue the political effort full-time.

Tolkin said his Jewish background inspires him to give back to the community.

“It provided a really strong moral foundation for me,” he said. “The notion of charity, tzedakah and giving back is something that’s important to me.”

He has been involved with the ROI community, an international network of Jewish leaders, and Eighteen:22, an organization for LGBTQ Jews.

Growing up, Tolkin had encountered homophobia.

“I’ve had my struggles,” he said. “I grew up as a gay boy in a world that didn’t really accept gay people.”

“But I’ve been really fortunate, I’ve been really blessed. I haven’t had the same struggles as a lot of other people, so being able to take my good fortune and put myself in the shoes of who is on the other end of the spectrum is something that I don’t necessarily think is uniquely Jewish, but it’s tied to Jewish values of helping the other.”

Tolkin literally put himself in someone else’s shoes during the campaign when he slept on the streets for two nights this spring in order to understand the plight of homeless New Yorkers.

“It was awful and eye opening,” he said.

As part of his platform, Tolkin wants to create a human rights council based in New York, which he calls the League of Love. The council, which he imagines to be “sort of like the U.N.,” would unite diverse human rights groups, such as those dedicated to the rights of women, immigrants, LGBTQ people and minorities.

He also hopes to create business partnerships between the private and public sectors, such as by creating an Uber-style car ordering service owned by the city.

Tolkin has largely self-funded his campaign, contributing nearly $500,000, including $315,000 in loans, $175,000 of which he has “forgiven.” He valued an in-kind donation at $5 million for earnings from trademarked logos he created to sell on T-shirts and mugs, as well as strategy services he is providing to his own campaign. (That earned him some media coverage.)

Though his bid looks like a long shot, Tolkin remains optimistic about the campaign.

“We have a week left from today,” he said, “and I think you’re going to be pleasantly surprised by the traction we’re able to get in the final week.”