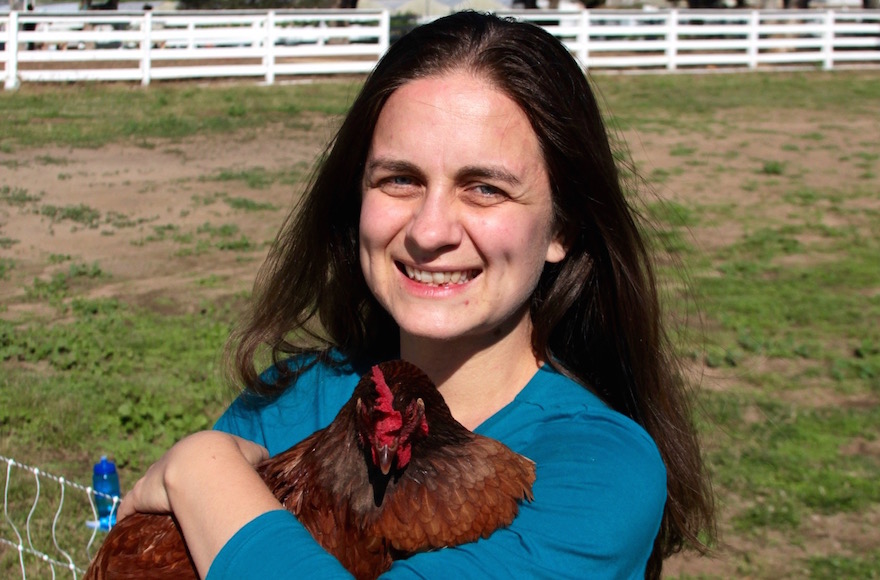 Sarah Chandler is leading a twist on the Kapparot ritual where participants hug chickens instead of swinging them over their heads. (Courtesy of Chandler)
Advertisement

NEW YORK (JTA) — Picture services for the High Holidays: What likely comes to mind is a roomful of congregants sitting with heavy books in their laps listening to a rabbi sermonize or a cantor chant.

Baking pizza? Embracing a chicken under a tree? Not so much.

But those are some of the things that Jewish clergy, educators and activists are doing to zetz up observance of the holiest days of the year.

Aside from attending synagogue or dipping apples in honey, the extensive body of High Holidays traditions includes rituals that are participatory, intricate and even acrobatic — but also obscure, inaccessible and sometimes distasteful.

In recent years, Jewish educators have tried to reclaim these rituals — changing and innovating them to be more engaging, understandable and relevant.

Here are five ways Jews are getting creative with the High Holidays this year.

Forgiveness is a warm chicken

If you walk into a haredi Orthodox neighborhood the day before Yom Kippur, don’t be surprised to see men swinging live chickens above their heads. The ritual, called kapparot, aims to symbolically transfer a person’s sins onto the chicken, who then is donated to the poor and slaughtered for food.

Some observant Jews, unable or unwilling to gain possession of a live chicken, now swing money over their heads that then goes to charity. Others have taken to protesting communities that still use chickens.

But at the Isabella Freedman Jewish Retreat Center in rural Connecticut, Sarah Chandler has a different response: Instead of grabbing the chicken and whipping it through the air, just give it a hug.

Chandler, who was ordained as a Hebrew priestess at the Kohenet Institute and also goes by Kohenet Shamira, will take a group to the center’s chicken coop on the Sunday before Yom Kippur and begin to recite the kapparot prayers. Then, if the chickens agree, the assembled will take them, retreat to a shaded area and individually embrace them while completing the prayers, confessing their sins or meditating.

At the end of the ritual, the worshippers will simply let the chickens walk free.

Although Chandler is a vegan, she appreciates the parts of ancient Jewish rituals that involve connecting to animals. This version of kapparot, she said, strengthens the relationships between people and animals while causing the animals no harm.

“How can we include these chickens in our Jewish life?” she asks. “I want the ritual to be so embraced that people really really believe that this chicken, and this moment looking into the chicken’s eyes, will help them be written in the Book of Life.”

Every year on Yom Kippur, no matter where he’s lived, David Zvi Kalman has joined other congregants at synagogue in standing through a long list of communal sins recited by the entire congregation. The confessional prayers, known as the Viddui (Hebrew for confession), all begin “For the sin we have sinned before you …”

The laundry list of transgressions, covering everything from eating impure foods to berating a friend, is a central piece of the day’s liturgy and is repeated eight times. Worshippers are supposed to gently beat their chests at each line.

Kalman had trouble identifying with the prayers, finding the confessions to be overly general and prescriptive. They’re the sins the liturgy says you should feel sorry for, not necessarily the ones you actually committed.

So in 2013, he created AtoneNet, a bare-bones Tumblr where people can anonymously post the sins they would like to confess and receive forgiveness for. While the response rate has tapered off in the four years since it launched, the past couple of weeks have seen a fresh batch of posts regarding “sins,” such as not giving enough charity or getting angry.

One post reads, “For caring more about being perceived as woke or the least racist than about the actual impact I have on the people of color around me.”

Or another: “For taking housemates’ food that isn’t mine without asking.”

Kalman prints out the entire site each year as a booklet and ships it to those who order it for use on Yom Kippur. He hopes the booklet allows them to atone for sins they feel are closer to their lived experience.

“A lot of people have specific regrets about the way they treated a family member in the time of illness,” said Kalman, a doctoral student in Near Eastern languages at the University of Pennsylvania. “You don’t see a recognition of that in the traditional confession.”

Cast your pizza crusts upon the waters

One of the more hands-on rituals of Rosh Hashanah is tashlich — literally, “cast away” — a ritual where people gather at a natural body of water and toss in bread, representing the casting away of their sins. (Sensing a theme here?)

Rabbi Jeremy Fine of the Conservative Temple of Aaron in St. Paul, Minnesota could never get people to come to the Mississippi River for the ritual after they had sat through a long service. So this year he’s involving the congregation’s kids.

The Sunday before Rosh Hashanah, about 100 Hebrew school students will come to the synagogue and bake pizza for lunch. Then they’ll eat the pizza, but not the crusts — they will go in bags marked with the kids’ names to be stored in the synagogue refrigerator. After services on the first day of the holiday, the kids will retrieve their crusts, head with their parents to the river and chuck them in.

Last year, Fine got about 50 worshippers to tashlich. This year he expects 150.

“If we just did a little piece of bread, we don’t know if it’s so important,” Fine said. “But when the kids see the crust cut off, it’s like there’s actually something we’re giving away.”

Yizkor, the memorial service for deceased relatives, is among the most well-known and best attended parts of the High Holidays service. But what to do if you live in a place where people are regularly getting killed?

That’s the challenge confronted by Tamar Manasseh, a rabbinical student and anti-gun violence activist on Chicago’s South Side. Manasseh runs Mothers Against Senseless Killing, a group of moms that patrols a street corner in the violence-plagued neighborhood of Englewood. Given the local strife affecting the largely non-Jewish neighborhood, Manasseh felt a service focused only on relatives who passed would be inadequate.

So last year, Manasseh organized a Yom Kippur service on her street corner for the community that along with a shofar blast and prayers included a reading of the names of Chicago’s gun violence victims that year. Just reading the list, she says, took 15 minutes — and she hopes to do it again this year.

“A lot of times the funeral is closure,” she said, regarding the families of victims. “It’s not like their loved ones are spoken of after that, and they’re definitely not prayed for.”

At the Yizkor service, she said, “You get to remember, you get to pray.”

Zen and the art of Noraa Kaplan

For Ashkenazi Jews, the kickoff to the High Holidays happens this year on the Saturday night before Rosh Hashanah. That’s when congregations gather to begin saying selichot, or prayers of atonement. Depending on a congregation’s tradition, the prayers range from a lively call-and-response to long, complex poems muttered almost silently.

But this year, two people are doing it differently.

At Lab/Shul, an experimental Jewish congregation in Manhattan, Rabbi Amichai Lau-Lavie noted that Rosh Hashanah this year coincides with the beginning of the Muslim year — so the synagogue’s theme for the High Holidays is interfaith worship.

The congregation will be praying with Muslims throughout the holidays, but for the Selichot service, it will partner with the New York Zen Center for Contemplative Care, a meditation space. The service will intersperse Selichot prayers from a range of traditions with meditation practices.

“It’s a way to begin the season by taking responsibility and accountability for who you are in front of God,” Lau-Lavie said. “The liturgy and the assumption of saying sorry to God feels a little challenging, so we feel that scaffolding and pairing [that] with introspection and the tools of meditation and contemplation are everyone-friendly. They don’t assume faith.”

Another take on Selichot is happening in Providence, Rhode Island, where musician Noraa Kaplan is turning the service into a concert. Kaplan has invited fellow musicians to perform, and is ending the night with a piece of performance art that challenges a range of Jewish rituals. It will include her parodying a bad bar mitzvah DJ, as well as swinging a rubber chicken over her head.

The event, at a concert venue she runs in Providence called “Al Dios No Conocido,” will be a benefit for charity, but Kaplan is going to let the crowd decide where the money goes at the end of the night. To her, there’s not a lot of difference between traditional Selichot and a weekend show.

“Selichot is supposed to happen in this late-night setting, and in many communities you see these Jewish people gathering at midnight or later,” she said. Playing a DJ, she plans to “ask people to clap their hands, and then ask them to clap their hands if they’ve ever wronged someone.”