I’m Israeli, and Rosh Hashanah is just not the same in the US 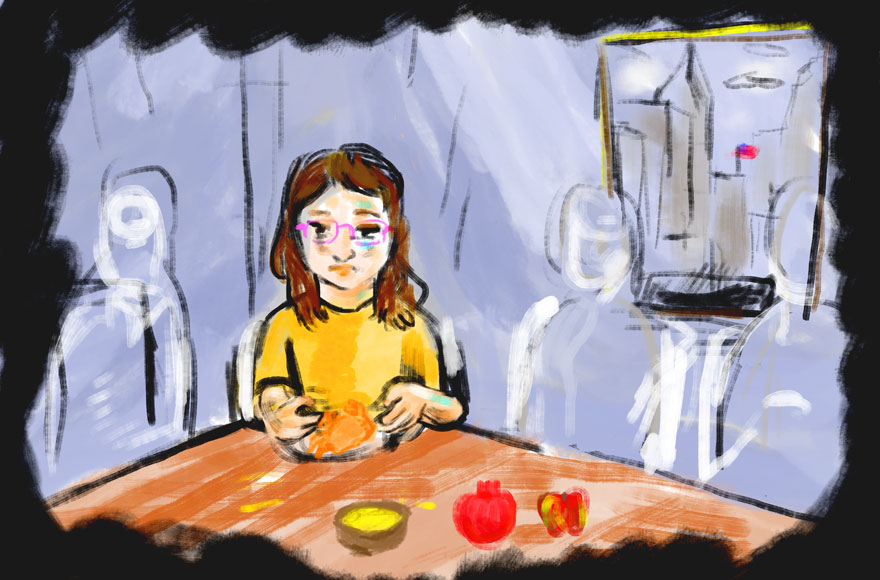 NEW YORK (JTA) — Last year, in a fit of desperation and loneliness, I booked tickets for a five-day trip to Israel for Rosh Hashanah. I didn’t tell my friends I was coming — the sole purpose of my travel was to have a holiday dinner with my family.

Financially, logistically and even physically, it was an ill-advised decision, I know. But for my soul, it was the right thing to do.

I left Israel for New York in 2009. I feel at home in my lush Brooklyn neighborhood with its beautiful brownstones, in an apartment my husband and I have filled with paintings and books. I love that the city has so much to offer as far as diverse faces and stories and religions. I love how New Yorkers refuse to meet a stranger’s gaze, but if you drop your wallet or MetroCard on the sidewalk (as, um, I often do) they will come running after you to make sure you retrieve it.

But there are some days when I feel like moving to the U.S. was a huge mistake. These feelings are most acute on the Jewish holidays — especially on Rosh Hashanah.

Celebrating Rosh Hashanah with my family in Israel is the best. We’ve never gone to synagogue; we rarely even mention the fact that it’s the new year. We stain our hands eating juicy pomegranates; we clear our sinuses by slathering horseradish on my grandmother’s homemade gefilte fish. For the main course we eat all kinds of treif delicacies like seafood paella and blue crabs, the preparation of which my mom has long perfected, having become fast friends with the local fishermen. We assure my grandmother and my mother that, yes, there is enough food, and yes, the dishes are just as good as they were last year. But most important we are together, and that fills us all with giddy delight and a certain spiritual awe.

My husband, a nice American Jewish boy, has told me about his own family’s habits on the High Holidays, particularly the long services at his Kansas City synagogue. He does not seem too gung-ho about celebrating the new year. Sure, he’ll fast on Yom Kippur, but he is happy to forgo any rituals when it comes to Rosh Hashanah.

Once, when we visited his parents on the holiday, I attended synagogue with his mother, just to see what it was like. While the service was warm and filled with music, it felt completely alien. It reminded me of a time a few years ago when I snuck into a Midnight Mass with a few other restless Jews. Certainly I could see the awe that came with such a ritual, but I felt very distinctly that this wasn’t for me.

Like about 40 percent of the Jews in Israel, my family is secular. My grandfather, the descendant of more than one rabbi, famously (according to family folklore) held cookouts on Yom Kippur. I now live a short walk away from South Williamsburg’s Satmar community, who believe the Holocaust was divine punishment for a lack of religious piety. But to my grandfather, who lost most of his family to the Nazi regime, the only religious epiphany the Holocaust had in store was that no deity would have let such a horror happen. He decided there was no place for religion in his life.

My family takes being secular very seriously. They scarf down bacon and cheeseburgers whenever they’re available. They love going on road trips on Shabbat. For my grandmother’s 70th birthday, we all take a tour of Jerusalem’s many churches, and, encouraged by our tour guide, sing “Jerusalem of Gold” on a rooftop of a haredi Orthodox neighborhood, where the singing voices of women are explicitly forbidden.

What does it mean to be Jewish when you’ve lost your faith? Most secular Israelis consider themselves Israelis first and then Jewish, according to a recent Pew study. To them, Judaism isn’t about religion — it is about culture, ancestry and history.

When you are an Israeli living in Israel, it is so easy to take your Judaism for granted. Judaism is in the language you speak every day; in a golden Star of David necklace; in the foods of myriad Jewish cultures that intermingled; in the Friday-afternoon rush to get your weekend groceries before the stores close for Shabbat.

But more than anything, it’s in family. And in my family, it means Shabbat dinners where candles don’t get lit and blessings don’t get recited, yet everyone is laughing and talking as roasted eggplant and matzah ball soup are passed around. After centuries of persecution, here we are sitting as a family, strongly anchored and aware of our history, but confident in our future together. Is there anything more Jewish than that?

When you’re an Israeli outside of Israel, it becomes increasingly hard to take Jewish secularism for granted. Certainly I am still Israeli — but I feel disconnected from my culture, my rituals. In America, doing Jewish things usually means making a religious choice, and with so many diverse and open synagogues, the choices do seem abundant.

Secularism, on the other hand, implies a fast track to assimilation — which isn’t my thing, either. You would think that in eight years in the U.S., I would have found some solution that works for me for the Jewish holidays. Yet I still feel just as helpless and lonely whenever September rolls around.

Most of my Israeli friends don’t seem to have solutions, either. Many of them just choose to ignore the Jewish holidays or find a certain comfort in hanging out with other Israelis eating shakshuka at a local Israeli restaurant. Some institutions have tried to introduce Israelis to synagogue culture on their own terms.

None of these have felt right to me, nor has celebrating the new year at services, American-style. So this year, my family is doing something really radical for Rosh Hashanah: My parents and brothers are flying in from Israel, and then we’re all heading to Chicago, where my in-laws will be waiting.

For the holiday meal, we’ve reserved a large table at a seafood restaurant, where we will most certainly delight in treif delicacies. I suppose I have found a way to keep some traditions alive, after all.