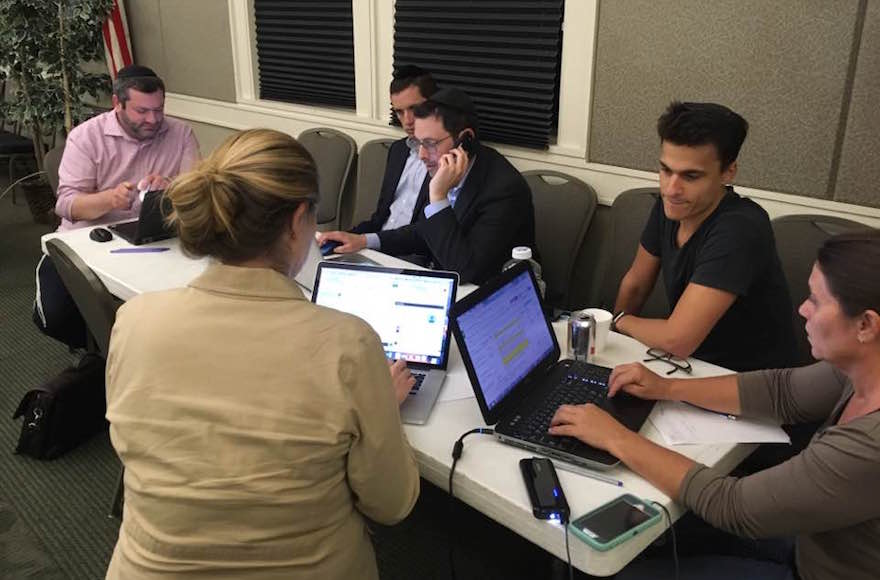 Volunteers in Atlanta's Orthodox Jewish community working to coordinate homes for evacuees from Hurricane Irma, which is set to hit Florida this weekend. (Courtesy of Adam Starr)
Advertisement

(JTA) — Rabbi Adam Starr was returning from an emergency trip to Houston, where he had helped a colleague clean up his synagogue after Harvey swept through that city, when his phone began to buzz. Jews from Florida had begun contacting Starr’s Atlanta synagogue seeking a safe haven from Hurricane Irma.

So on Tuesday, right after Starr got back from pulling out drywall and moving holy books in Texas, he began organizing his own relief effort back home. By Thursday night, he and a team of local volunteers were sitting around folding tables in Beth Jacob, a suburban Atlanta Orthodox synagogue, each working on laptops to coordinate shelter for Florida Jews.

“We were starting to get inquiries about Irma — two, three, four people asking about coming for Shabbat,” said Starr, rabbi of the Young Israel of Toco Hills, near Beth Jacob. “We realized this is going to be a real need, and instead of dealing with a one-off, let’s open our community.”

Irma, a Category 4 storm, has been called one of the worst hurricanes in decades. It ravaged the Caribbean this week and is expected to make landfall in Florida late Saturday.

The number of families seeking refuge in Atlanta’s Orthodox community is up to 250 — and growing. The community has turned into a landing spot for religious Jews from Florida seeking home hospitality, a local synagogue and meals for Shabbat funded by the Orthodox Union. Starr estimates that about 600 Orthodox families live in the area; many of them will be hosting impromptu guests on Friday night.

“What’s been going on for the past 36 hours is making shidduchim,” Starr said, using a Hebrew word for matches. “We’re the largest [nearby] Orthodox community that’s not directly in the path of the hurricane. We can do a tremendous kindness in assisting these people who want to get out of harm’s way.”

The Orthodox synagogues are two of nearly a dozen Atlanta Jewish institutions that have pitched in to help Irma evacuees from Florida, which has one of the country’s largest Jewish populations. Members of B’nai Torah, a Conservative synagogue, are hosting about 150 people, including some non-Jews. On Saturday morning, a few dozen members of the Conservative Aventura Turnberry Jewish Center, on Florida’s coast, will attend services and lunch at B’nai Torah.

A few other synagogues have opened their doors, as have three nearby Jewish camps that are hosting evacuees. The campus Chabad at Georgia Tech is welcoming students from out of state, and the local Jewish community center is offering free passes to evacuees. Jewish Family and Career Services has a hotline where evacuees experiencing trauma can talk to clinicians.

The rabbis aren’t sure how long they will have to host the Floridians, though Heller estimates they will be in Atlanta at least until Wednesday. And though Atlanta is inland, there is a chance that Irma could bring damage there, too. Savannah, Georgia, and Charleston, South Carolina, are also in its path.

“All of Florida is trying to come to Atlanta at the moment, and Savannah and Charleston are close behind,” said B’nai Torah Rabbi Joshua Heller, who was up at 1:30 a.m. Friday inflating air mattresses in his basement for evacuees.

Melissa Miller, public relations manager for the Jewish Federation of Greater Atlanta, recalls the community making a similar effort in 2005 to shelter Jewish victims of Hurricane Katrina as it swept through New Orleans. Some of those evacuees never left Atlanta.

“We had whole families in the middle of the night who came to Atlanta, left all their belongings,” Miller said. “There’s a tradition of loving kindness and Southern hospitality that all goes hand in hand. We’ve just always mobilized.”