After a year of terror, the Jews of Whitefish, Montana, look ahead 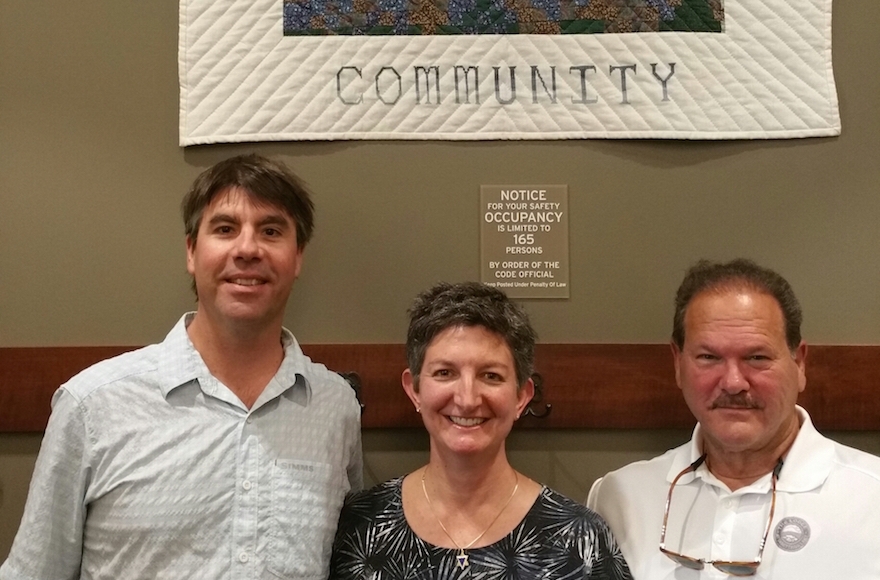 From left: Whitefish, Montana Mayor John Muhlfeld, Rabbi Francine Green Roston and Paul Goldenberg, the director of Secure Community Network, posing, Aug. 25, 2017. The Whitefish Jewish community has been subject to an onslaught of anti-Semitic harassment over the last year. (Courtesy of Goldenberg)
Advertisement

In a year when white supremacists have been ascendant, at least in their public profile, perhaps no community has been harder hit than the Jews in the one-time rail stop set against a backdrop of mountains and bordering the town’s shimmering namesake lake.

The election of Donald Trump as president and a feverish debate among Jews and others over whether he had actively courted the far-right vote raised the profile of the town’s best-known white supremacist, Richard Spencer. A dispute between a Jewish real estate agent and Spencer’s mother, whipped up by a neo-Nazi website, sparked months of harassment, targeting in particular three Jewish families.

Rabbi Francine Green Roston, whose family was among those targeted, said there was no way the community could put behind it the harassment, which reportedly included jarring phone calls and online onslaughts aimed at the families’ children.

“Our lives will never be the same,” Roston said this week in an interview, choosing not to detail the harassment she and her family suffered. “But we have returned to what we were building before this happened. We’re continuing to be part of initiatives to promote strong community ties to fight hatred wherever it arises.”

Positive takeaways, she said, include the awareness of national Jewish support.

“Secure Community Network, the Jewish Federations of North America and the Anti-Defamation League were on the ground supporting us in the first week,” she said. SCN is a security service backed by the federations and the Conference of Presidents of Major American Jewish Organizations.

Such attention was unusual for a Jewish community numbering perhaps 60 in Whitefish and a couple of hundred more in the surrounding Flathead County. Roston was in the habit of saying she practiced “pioneer Judaism” in a state with no local federation and no national affiliations.

“We felt the support and connection of the American Jewish community,” she said. Not just from the organizations, she said, “but we received cards and letters and donations from communities across the country. The donations enabled us to have a security fund, and our new normal is to have a security guard at our large community gathering.”

The cyber attacks, which escalated into threatening phone calls and abusive snail mail, were launched late last year after Spencer’s mother, Sherry, said in an online posting that Tanya Gersh, a local real estate agent, was pressuring her to leave the town.

The emails posted by the elder Spencer suggested instead that she and Gersh had, in friendly conversations, discussed selling her property. Gersh was ready to cut her fee in order to facilitate the sale.

Spencer’s posting prompted Andrew Anglin, a neo-Nazi who founded the Daily Stormer website, to write a screed on Dec. 16 calling on his followers in December to harass Gersh and her family, as well as the Rostons and the family of another rabbi in the area, Allen Secher.

Within a day SCN’s director, Paul Goldenberg, had commissioned a colleague in Seattle to drive to the community — no small feat in December, when the roads into Whitefish are icy and beset with snow. ADL National Director Jonathan Greenblatt also called to see how he could help.

There were also expressions of support from the local non-Jewish community and a commitment by local officials to intensify diversity education.

“After the attacks, a group worked with interfaith clergy, which we hadn’t had before,” she said. There were two “Love Not Hate” rallies in the region and diversity training in the school system. 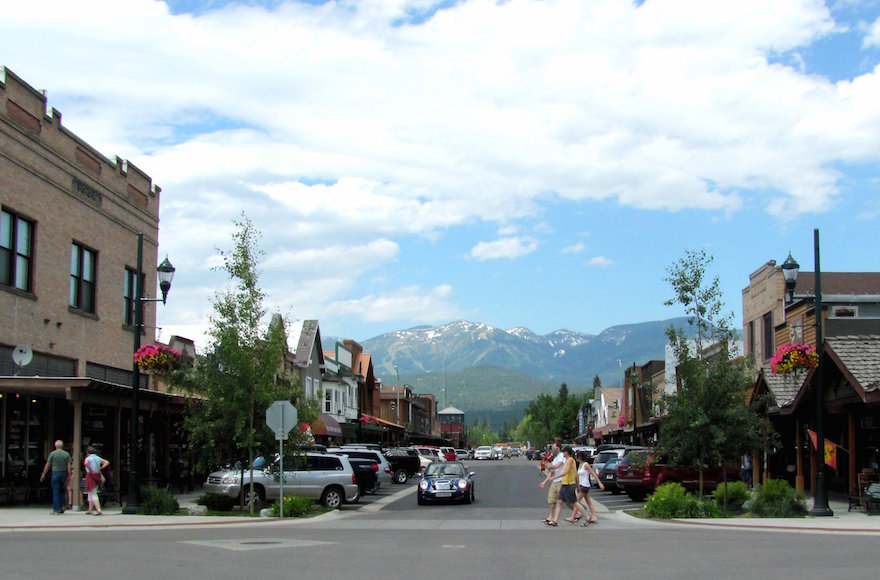 Goldenberg said his experience with Whitefish was the most moving for him in over a decade dealing with Jewish security.

“Attacks that specifically target children are abhorrent and unthinkable and would have the capability to paralyze any community’s ability to function and thrive,” he said in an interview.

Goldenberg said the community’s resilience — the determination to stay put — amazed him. He was a guest of honor at the summer Shabbat event, which the community calls its annual “ShabbaBBQ.”

Indeed, Roston said, there has been a coming together. She said the community to a person backed Gersh’s lawsuit against Anglin. The Southern Poverty Law Center is assisting in the suit, which seeks damages from Anglin for invading Gersh’s privacy and causing emotional distress.

Still, clearly there are periods when Roston and others retreat into the fears prompted by the cyber onslaught of last winter. Last month’s white supremacist march in Charlottesville, Virginia, which included deadly violence, triggered difficult memories for the rabbi. Richard Spencer was there to speak at a rally that Saturday morning.

In a speech at a Love Not Hate gathering after Charlottesville, Roston excoriated President Donald Trump, who has equivocated in condemning white supremacists — but also wondered about those closer to home.

“Did you know that residents of the Flathead Valley through their Twitter accounts and postings on the Daily Stormer threatened Whitefish residents and businesses by giving the Daily Stormer the names of our local businesses to attack?” she said in her speech. “Yes, you heard me correctly. We all have neighbors who joined the Nazis in their attacks on our community this past winter.”