Israel will ‘act to enforce’ Syria red lines, its US ambassador says 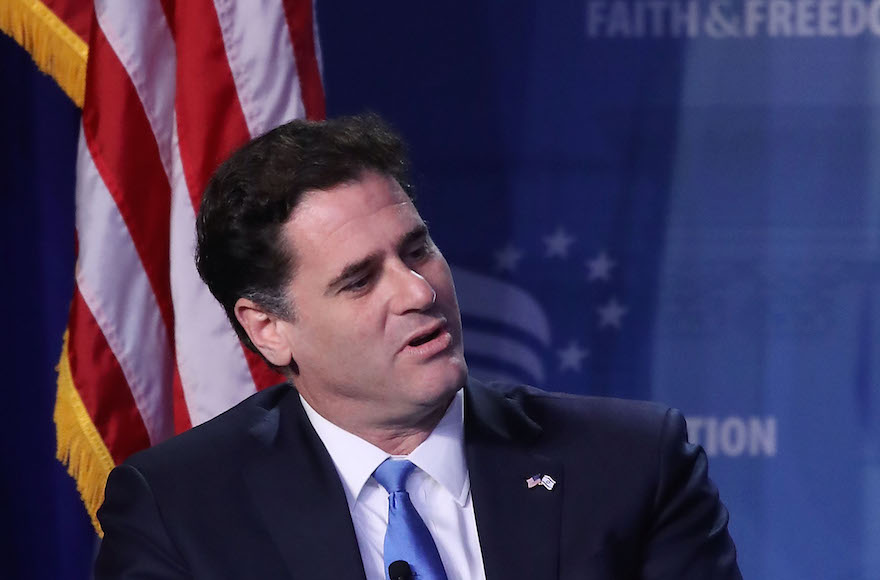 WASHINGTON (JTA) — Ron Dermer, Israel’s ambassador to Washington, told a Rosh Hashanah event packed with U.S. officials that Israel would enforce two red lines in the civil war in neighboring Syria: the transfer of major weapons to Hezbollah and the establishment of a permanent Iranian beachhead in the country.

“Israeli Prime Minister Benjamin Netanyahu has been very clear about Israeli red lines in Syria and Israel has acted to enforce those red lines,” Dermer said Tuesday evening at a Rosh Hashanah party at his residence in suburban Washington, D.C. “The transfer of game-changing weapons to Hezbollah and the opening of a front” for anti-Israel terrorism.

The Netanyahu government has been wary of what the end-game could be of U.S. efforts to end the war in Syria. There is a concern among Israelis — articulated most often by the defense minister, Avigdor Liberman — that the Trump administration might defer to Russia, which is allied with the Assad regime. Russia’s Assad alliance means it is in a de facto alliance with Iran and its Lebanese ally, Hezbollah, because they also are allied with the Assad regime.

In an attack Syria blamed on Israel, combat planes last week hit what is believed to be a chemical weapons facility in an Assad-held portion of western Syria. Israel has not acknowledged responsibility.

Dermer cast the intensification of Iranian influence in Syria as a consequence of Obama administration policies, particularly the 2015 Iran nuclear deal, which traded sanctions relief for rollbacks in Iran’s nuclear program. He said Iran hit the “double jackpot” with the deal, earning money while not truly giving up its nuclear ambitions, and has since used it to expand its influence.

Outside of concerns over the possible outcomes of the Syria civil war, Netanyahu and Dermer have made no secret of their preference for President Donald Trump over President Barack Obama. Dermer twice said he was “deeply grateful” to the Trump administration for its role in brokering closer ties between Israel and Sunni Arab nations — a closeness spurred in part by shared concerns about Iran and Islamist terrorists — and for Nikki Haley’s “unequivocal support” for Israel in the United Nations, where she is U.S. ambassador. He called for applause for Jason Greenblatt, who was present and who is Trump’s top negotiator.

Dermer expressed support for congressional legislation that would slash U.S. funding for the Palestinian Authority as long as it continued payments to the families of Palestinians jailed for or killed attacking Israelis. In expressing support for Greenblatt’s peace-brokering efforts, Dermer notably did not note that the centerpiece of the Trump administration’s peace push is restarting talks between Israel and the Palestinians.

Dermer said he anticipated a “dramatic change” in the U.S. position on the Iran nuclear deal in coming weeks, saying there either would be changes to the deal or it would be scrapped. Trump has said he might not recertify Iranian compliance with the deal when he is due to do so next month.

Dermer did not mention anti-Semitism, in the United States or in Europe — notable at an event to which the embassy invites the U.S. Jewish leadership. U.S. Jewish organizations have repeatedly expressed alarm since Trump’s election of the increasing influence of the “alt-right,” a loose confederacy of anti-establishment conservatives that includes white supremacists, and also at the similar recent prominence of such views in Europe. They have also been alarmed at Trump’s equivocation when called to condemn white supremacists.