Why Israel went wild over $1,000-plus crocodile-skin kippahs 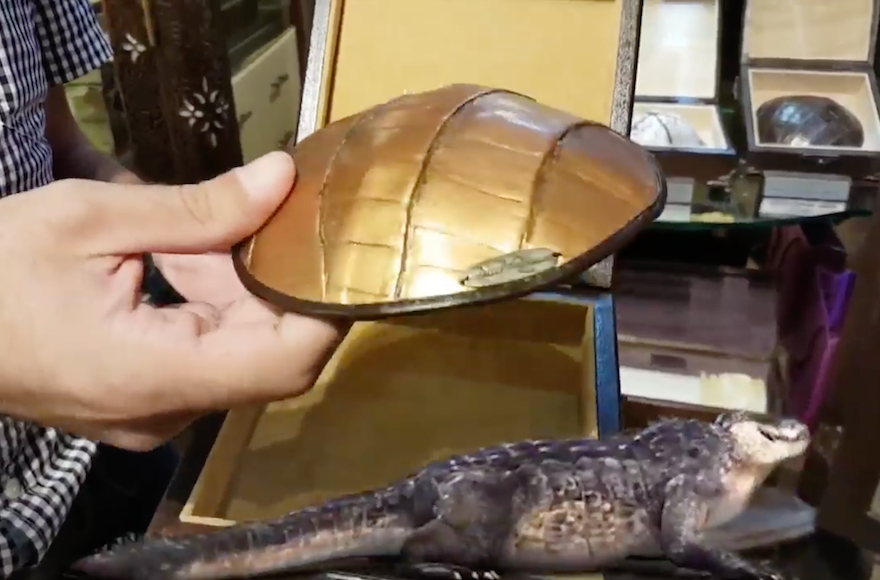 JERUSALEM (JTA) — For a few days, exotic animal-skin kippahs were something of a sensation in Israel.

Curious locals and journalists rushed to a Judaica store in the Old City here to marvel at the new luxury-marketed crocodile, python and cowhide Jewish head coverings. An ostrich edition was said to be coming soon.

But as the hype grew, so did the public backlash.

“The inspector came after we got this very, very negative reaction,” said store manager Shaun Nathan. “I understand the argument, I really do, but we were hearing from this ridiculous lunatic fringe. People were phoning us and threatening to burn down the store.”

It all started with some local yeshiva boys who stopped by the store on Sept. 4. Impressed by the newly arrived yarmulkes, one of them posted photos on Facebook. By the next day, newspaper reporters and TV crews were on the scene.

The Fifth Quarter Judaica store’s owner, Eli Mordechai, gamely showed off the kippahs, which are sold in fabric-lined oak boxes for as much as $1,400 each. They even come with built-in hair clips. Mordechai touted them as must-have headwear for observant Jews seeking that Russian oligarch look.

“These kippot were born out of the desire to provide people who live in a world of luxury and brands a kippah befitting their lifestyle,” he told Israel’s popular Yediot Acharonot newspaper. “A person wearing a $10,000 Gucci suit won’t be caught dead wearing a $50 off-brand kippah.” 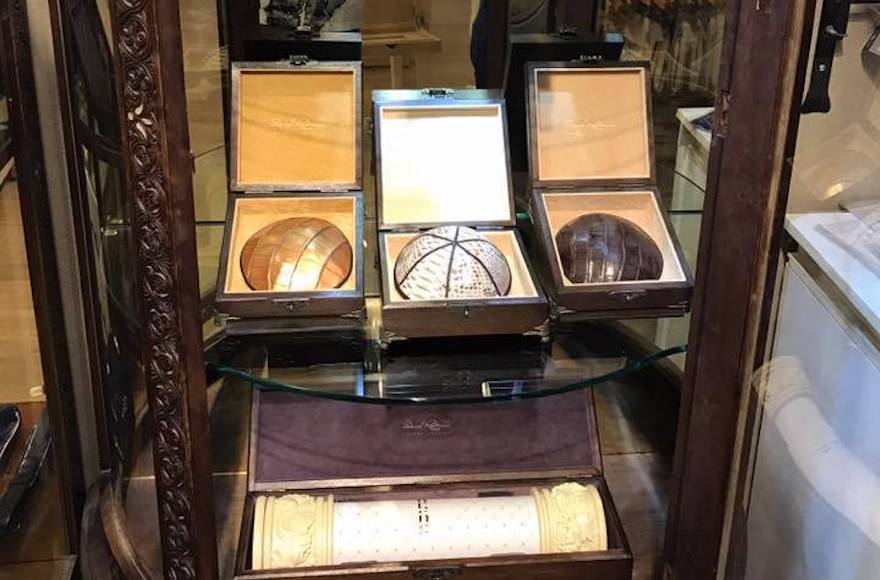 Typical kippahs are made from cloth, cotton yarn, velvet or leather.

Yediot noted that the exotic kippahs are made from unkosher animals. But Mordechai assured the newspaper that unlike tefillin, mezuzahs or Torah scrolls, kippahs can be made from any material according to Jewish law.

As it turned out, the outrage came not from stringent Jews but from supporters of animal rights. Israel is a hotbed of activism on behalf of animals, and as much as 13 percent of its population is said to be vegetarian or vegan.

While no major organizations seemed to take up the cause, thousands of online commenters railed against Fifth Quarter for selling the kippahs. Some blamed Judaism, while others said it was a violation of the religion.

“Shameful and disgraceful religious hypocrisy. Even religious objects have a limit,” one woman wrote on Facebook. “God never said in the Bible that abuse of animals is OK and this is undoubtedly abuse.” 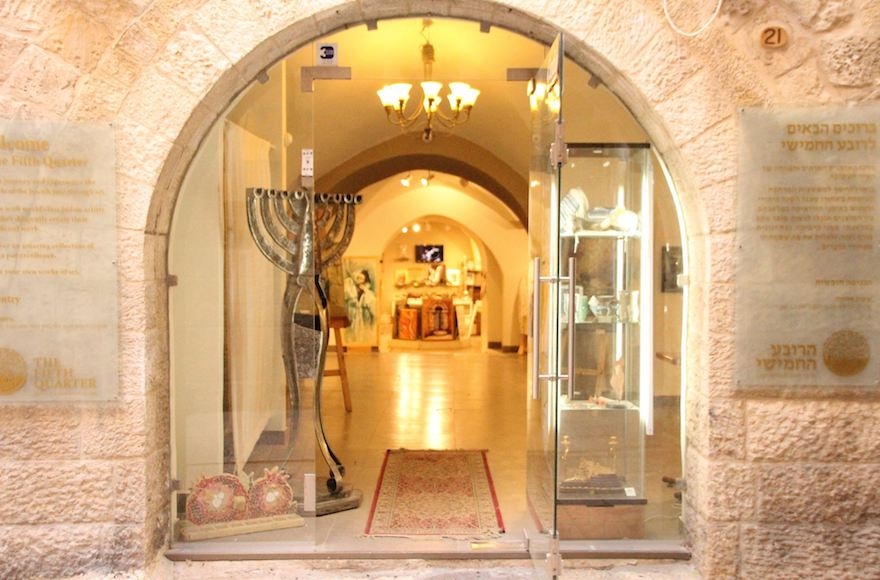 Angry phone calls started coming into the store, too. Nathan said the first person to call after the news broke, an elderly vegan woman, politely suggested that any profit from the kippahs was not worth the moral cost. But the callers became hostile, he said, with some threatening violence.

A few critics even linked the kippahs to the Israeli-Palestinian conflict, Nathan said, declaring things like, “These people are ethnically cleansing children anyway, so who cares about a python?”

Apparently alerted by the media coverage, an inspector from Israel’s Nature and Parks Authority came to the store Sept. 7 and confiscated the kippahs along with some crocodile skin mezuzahs from the same producer. He said they had been imported without the testing and approval required of products derived from wild animals.

Despite all the fuss, Fifth Quarter had only stocked one of each style of kippah and two of the mezuzahs, and had sold none, Nathan said. He said he has been awaiting a larger shipment of more products, including ostrich skin tefillin bags.

In the meantime, the kippahs had been placed on a glass display case in a room filled with Jewish tourist attractions. The store holds free educational lectures and workshops about some of its products, like an aquarium filled with blue snails that some believe are the source of the turquoise dye used in sacred Jewish garments in ancient times.

“Basically, we try to highlight Judaism and Jewish life through art and Judaic design,” Nathan said. “One of our shticks is we have special items to try to bring in tourists.” 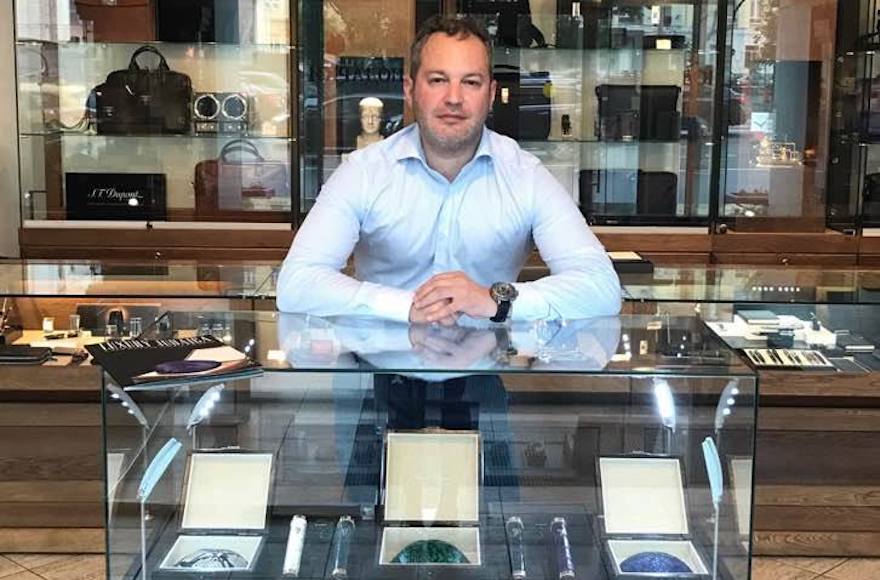 The designer of the kippahs is David Roytman, a Ukraine-born Israeli specializing in “luxury Judaica.” He said he created the first kippah “prototype” in 2015, and noted that he has a stingray skin design as well.

“People spend thousands of dollars on a luxury watch and shoes, and they wear something on their head that looks like a disaster,” he said. “My idea was to make a respectable kippah.”

Although Mordechai told Yediot his was the first store in Israel to carry the kippahs, Roytman said his products have been “displayed exclusively” at the Hazorfim Judaica store in Tel Aviv, as well as in New York, Toronto, London, and Russian, European and Central Asian cities. They are also for sale on the website.

Roytman said he could do nothing to help Fifth Quarter with its permit issue, but expected their business partnership to resume when it was resolved.

As to the animal rights outcry, he said it was “ridiculous” for people to get so upset over kippahs given the other problems the region faces, “but this is Israel.”

While the final decision is Mordechai’s, Nathan said he believes the store would be wise to get out of a business that kills animals to make kippahs for oligarchs — especially given the public relations headache.

“If I look back at it now, it’s not a cool product. It really isn’t,” he said. “It brought us a lot of attention, and people will definitely buy it. But we really don’t want any part it.”